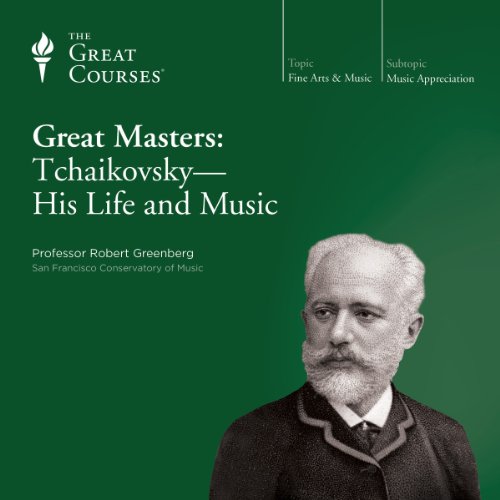 Although we often think of an artist's work as a window into their own inner world, that is not always the case.

In the life of Peter Ilyich Tchaikovsky, however, we can see perhaps the closest link to be found anywhere between a creative product and the shifting moods of a turbulent soul, which found its outlet through the glorious music created by the great Russian composer.

To know his music, you must know the man, and this fast-moving series of eight lectures from an award-winning composer and accomplished teacher offers an insightful look into both the circumstances of Tchaikovsky's life and the impact that life had on his music. You'll learn about his fear of conducting, his disastrous marriage and subsequent suicide attempt, his depression, and the constant anxiety that his closeted homosexuality would become public-a fear that proved prophetic and led to a second, and successful, attempt to take his own life.

Torn by the conflicts between his own Romantic inclination for expression and the requirements of Classical structure - he was the first full-time, formally trained, professional composer in Russian history - Tchaikovsky's music is a delicate balancing act. Heart versus head, emotion versus reason, release versus control, the expressiveness demanded of his Russian soul and the strictures of Classical technique - all of these conflicts find their way into his music, and give it its extraordinary emotional power.

Robert Greenberg's Great Masters are the BEST "Great Courses" lectures that I have heard until now. I loved Beethoven's courses and I loved Tchaikovsky's as well. Greenberg's style is unique: he speaks full of passion, the characters are well painted, the music is properly inserted.He points out to the music for example-- listen to the oboe, or look how the piano is the superb instrument-- and demonstrates the mood of the author at that precise time-- here he was sad, then he was happy. He retells with music the history of Tchaikovsky's life, his torments, and greatness.
Robert Greenberg's lectures are as entertaining as educational. Listen to them. You won't regret!

love the series but too short

as always these lectures pass far too quickly. they are very entertaining and I learned many a new fact. however I can't get rid of the impression that the professor focuses very much on sensational details to make the time pass quickly. I could easily do with more rigor and would enjoy the lecture more

12000 love letters to someone you never met

Would you listen to Great Masters: Tchaikovsky - His Life and Music again? Why?

I don't know if I would have the time again with all the other Dr Greenberg courses I am listening to. I have listend to about fifty four hours and counting. These courses are most invormative.and give you a very good idea of the composers life and the history of the area in which he lived.

What was one of the most memorable moments of Great Masters: Tchaikovsky - His Life and Music?

His relationship with Van Meck is very interesting, and the story about his Romeo and Juliet.

Have you listened to any of Professor Robert Greenberg’s other performances before? How does this one compare?

Ihave listened to Dr Greendergs lectures on Brahms, Stavinsky and how to listen to and understand music 3rd addition I have several others of his courses that I will listen to in the future.

Why to long for one sitting. nice to have it in dailey lectures.

Amazing musical biography of Pyotr Tchaikovsky. I love how the lectures introduced less known music and I just wish that they were longer. As a life-long fan of Tchaikovsky's music, this series was a special treat

Much too much about his sexuality instead of music

Would you try another book from The Great Courses and/or Professor Robert Greenberg?

I have several of these books and would try more. I prefer ones that spend more time on the musical achievements.

What could The Great Courses have done to make this a more enjoyable book for you?

I would have appreciated learning much more about the great music and hearing more excerpts. There were, of course, some--just not enough.

The narration keeps your interest. I wish, however, that Greenberg would not read the quotes with such a strange emphasis. He often makes things sound mocking or sarcastic when they really were not that way at all. Also, there was too much speculation about Tchaikovsky's homosexuality throughout this. Some...okay. But rather than lengthy speculations, for example, that his feelings for his nephew were inappropriate, a sentence or two would have been sufficient--then, please, more focus on the music.

Did Great Masters: Tchaikovsky - His Life and Music inspire you to do anything?

This course did inspire me to read more about Tchaikovsky (correcting a few of the misimpressions I got from it along the way) and also to listen to and watch more of his symphonies, ballets and the great violin concerto.

I definitely learned from this course and Professor Greenberg's enthusiasm held my interest. But it is unfortunate there was not more about his professional life (which is overwhelmed by speculation about his personal life and sexual orientation) and more excerpts and analysis of his greatest works.

This Great Masters Course on Tchaikovsky was such a wonderful blend of glorious music and history. The Author/Narrator’s delivery was so interesting and exciting that it kept me wanting more.

Excellent lectures on a favorite composer

Prof. Greenberg leads us through a fascinating story of a complicated genius and his music. This is my favorite of his courses - I have listened a few others in the past and his somewhat overbearing style got to me. Here somehow it worked - it fit the composer's dramatic and mercurial personality. Tchaikovsky's life is amazing and tortured and dramatic, and Prof. Greenberg shows us where it all emerges in the music.

Prof. Greenburg is probably the most prolific of the Great Courses lecturers. If you are looking for a place to start with his catalog, I would start here.

Another Great Course from Greenberg

As usual, Prof. Greenberg has a tremendous grasp of the subject matter. His style is pompous but enjoyable. If you've acquired the taste for his courses, you'll love it.

Dr. Greenberg is a Musical Treasure

Tchaikovsky - His Life and Music is the third lecture course by Dr. Greenberg that I have completed. His exhaustive research and compelling delivery of the subject matter guarantees that I will be back for more. Plus the packaging of the course which now includes a PDF of the course outline and other source materials really adds to the professional "look and feel" of the Great Courses product. One suggestion might be that Dr. Greenberg could reveal the specific recordings that he uses. He might hesitate to do that for "professional courtesy" reasons, however, I've been an avid listener since "vinyl" and "Hi-Fi" were the buzzwords of the day so I know that some performances accel and some disappoint. So in the spirit of Dr. Greenberg's encouragement of the "noble acquisition" of good music, would it be appropriate to ask for a list of the best recordings that he uses? Truth be told I'm old enough that I already have everything he references on vinyl, cassette tape, CD, and MP3. I'm just paranoid that I might not have the very best!

I've truly enjoyed these lectures. They shed light on all the truth about Tchaikovsky which makes you love and respect him even more.