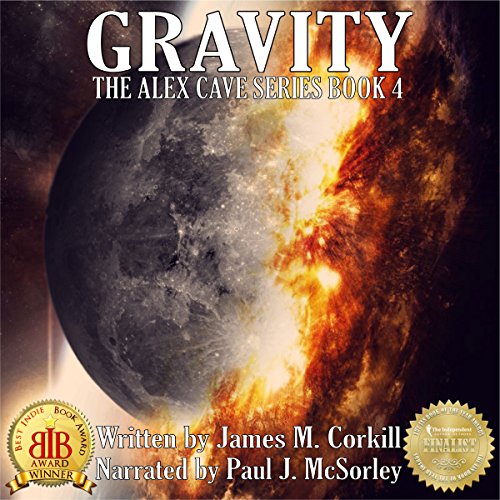 Geologist Alex Cave receives an urgent message about an unusual geologic event in Iceland. Giant globules of molten rock are floating up out of an ancient glacier.

Alex and his friend Okana descend deep into the lava tube of a dormant volcano and discover a 180-million year old alien artifact of incredible power. But before he can take it to a safe location, it is stolen by Janice Sloan, a ruthless woman dealing in stolen advanced technology. When she turns it on, the device begins changing the orbit of the moon and dragging satellites from the sky, but it won't shut down.

Alex begins a desperate race to find the artifact while dealing with his live-in girlfriend, Fala, who thinks he's just an adventure junkie, leaving her and her 10-year old daughter on the spur of the moment without any explanation or concern for her feelings. Because of the clandestine nature of the operation, it's ripping his heart out that he can't tell her he is on a top-secret mission to save the lives of everyone on the planet.

Alex learns that even if he finds the artifact, he needs a key taken by Sloan to shut it down, but she is determined to acquire a vast sum of money for her efforts. She kidnaps Fala and her daughter as leverage to keep Alex from pursuing her, and will contact him in two weeks with instructions on where to transfer two million dollars into a numbered account in exchange for his family and the key.

And as if that wasn't bad enough, a massive emerald asteroid with a core of solid gold is on a collision course with Earth and will impact in six days. In order to change its trajectory, he needs the artifact and the key, but he's running out of time to find Sloan and his family. Can Alex find a way to save his loved ones and civilization from extinction?

Man against the Planets

This is the fourth in the series which I've had the pleasure to listen to [AUDIO] and it is a rootin', tootin' hoot of an adventure, disaster, sci-fi thriller finding new potential apocalypse featuring excellent narration which enhances the drama. I'm surprised these haven't already been picked up for exploitation on the silver screen as our larger than life hero survives inner and outer space to save the day. Now THAT is not a spoiler--this is a series, after all!

Each book has been better than the last

Gravity (Alex Cave, #4), my fourth read from author James M. Corkill. Well-written and captivating with well-developed main characters reminding one of Christopher Cartwright’s Sam Reilly writings. I received an Audible copy of Pandora's Eyes (The Alex Cave Series, Book 5) back in March of this year & wanted to read the series in order so I bought this book. Paul J. McSorley’s narration adds to the book's enjoyment. I'll be reading more from this author. Next up, Pandora's Eyes (The Alex Cave Series, Book 5), the book that started it all with me & my fifth James M. Corkill read this week. (RIP Marley January 20, 2014 - July 24, 2018).

Edge of your seat adventure does not disappoint

When the International Space Station and the Moon itself are in danger of crashing into Earth, Geophysicist Alex Cave is called on to investigate the mysterious forces at work. Who or what is behind this, and can Alex and his team find the answers in time to save millions of innocent lives? Even better now that it is on Audio-book, it can be enjoyed anywhere you happen to be listening.

Gravity was so good. This series has mystery, suspense, and science. It is really cool that I have learned some things but still listened to fiction. Gravity follows right into Pandora’s Eyes. And of course Paul’s voice is amazing

Likeable characters in interesting, often dangerous but fun adventures. Excellent SciFy story and something that I really like about this author, no cliffhanger, no unnecessary tragedies, nope a satisfying ending..

Can’t wait for the next book!

A great sci-fi story continues here in book 4. If you haven’t listened to the previous books, I highly recommend starting from the beginning for the whole experience. The story is crafted wonderfully and the narration is well done.


I have been given a free copy of this book in exchange for an unbiased review.

Another save the day adventure by Alex Cave!

If you could sum up Gravity in three words, what would they be?

The overall action and suspense!

Where the uncle is working feverishly to save the marina.

Where Alex and O'Connell find out their loved ones are still alive!

I hope there are additional books coming in this series.

Gravity doesn't hold up to the Series

I would strongly, highly recommend the first three books to anyone. This one, not so much. Did someone hijack the series? A knock off ghostwriter?

This book starts off similarly to Book 2. Alex Cave is at his college, doing his professor thing and complaining about his humdrum occupation, eluding readers to believe he has been playing house and staying local the since we left him eight months ago, at the end of book 3. Only we learn he leaves Fala and her daughter quite often on excursions and special ops for the Director of National Security. And Fala, a domestic abuse victim from a previous relationship has completely come into her own with her vicious words and ultimatums for Alex to stay home with them. "YAWN". What a wimp of a woman and a disgrace to Alex's judgment of character.
Compounding the fractures of the deteriorating character flaws, Alex Cave turned into a weak, stupid boyfriend, who proposes marriage in the midst of their problems and arguing. At this moronic point, I half expected him to suggest they get pregnant, too, to fix all that ails their relationship- like his jetting off all of the time. He should have reasoned a baby would substitute his adventure addiction.
I also found it mind boggling how Alex is the only person, a geophysicist, who can save the world again. He doesn't need specialists in various fields for gravitational guidance, and piloting spaceships. Oh. And a translator deciphered alien communication within minutes. It's a tragedy to our government and our society when he corrects the Director of National Security and continuously declines additional military assistance. Like no ine else knows about the previous alien encounters. Give. Me. A. Break. There should be dozens of high security clearanced personnel working on the spaceship and its technology.
The villain is weak. The action is lacking. The world building has crumbled. The characters have become a shell of an imagination and lost their personalities. And when given the choice to exchange the device for lives, not only did Alex and Okana give it little thought, they didn't even consider it to turn it into a rescue mission in disguise.
This was the most disappointing book in a series. Not only would I not recommend it, I'd recommend anyone who starts this Alex Cave series to skip this book. As it stands, I'm uncertain if I'll give Book 5 a chance now.

If you’ve listened to books by James M. Corkill before, how does this one compare?

This was poorly designed in comparison to the previous three. I'm not sure if the author gave it much thought or rushed, just to get a book out.
There were no redeeming qualities. I think I wished there was a female character throwing herself at any available man again. Oh. Nevermind. Gender switch. Okana was putting it on thick. But it wasn't interesting.
This book also lacked the details of the White House internal briefings. Oh, I forgot. They slept well because Alex was at the helm.
No climax ending. No grief. No emotional investment to the characters. I even hoped Cavewould get over the dominating bytch of a girlfriend and kick her to the curb. Their relationship was not believable nor to be admired to feel angst.
Everything was too neatly tied with a bow. It was like going through the stages. This felt like a YA book, several slips below the qualities of the first three.

Which character – as performed by Paul J McSorley – was your favorite?

Sadly, not even Fala's daughter was a highlight.
The narrator even seemed to have lost his enthusiasm in the storytelling, as if he, too, expected more from the author/series.

Could you see Gravity being made into a movie or a TV series? Who should the stars be?

The first three books could be dynamic on screen. This needs to be rewritten and copy edited. The characters and science/sci fi plot that were significant to my interest in the series don't pulk through in this book.

This was a disappointment.

Another great installment to the series

It's always interesting to see what Alex is going to get himself into and this book brought that same excitement. Story kept me captivated, and the narrator had a great voice to keep me listening.

I'm glad I didn't have to shoot you.

Alex Cave, man of action, now university lecturer, believed himself truly content now, with a women he loved and her delightful little daughter: his perfect family. But he was fooling himself, and them, by breaking promises made as well as keeping secrets from them. Leaving them behind, he investigates a strange phenomenon which had been noticed in Antarctica, and then moves on to save the world from even more epic destruction.

Enjoyable, fast paced action story, well read by Paul J McSorley. Some exciting mental pictures formed although the characterisation is fairly flat, but somewhat saved by the narrator's skill. Could see this as a full colour, big budget, glorious space filled adventure film. And the idea of a gold and emerald asteroid is rather fun: can just see the world's greedy leaders' eyes glowing at the idea of adding that to their treasury.

The Alex Cave series has been a good science fiction action trilogy up to now but, having moved on to book four, seems to have lost something somewhere. Still good, but for some reason, I just didn't care after the introductory pages (although the frantic attempts of Jerry to save his town were thrilling). Still worth a read if macho action in black and white is your thing.