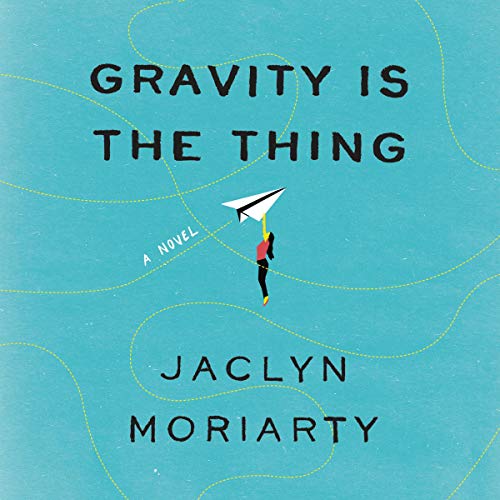 Gravity Is the Thing

The adult debut from best-selling, award-winning young adult author Jaclyn Moriarty - a frequently hilarious, brilliantly observed novel in the spirit of Maria Semple, Rainbow Rowell, and Gail Honeyman - that follows a single mother’s heartfelt search for greater truths about the universe, her family, and herself.

Twenty years ago, Abigail Sorenson’s brother Robert went missing one day before her 16th birthday, never to be seen again. That same year, she began receiving scattered chapters in the mail of a self-help manual, the Guidebook, whose anonymous author promised to make her life soar to heights beyond her wildest dreams.

The Guidebook’s missives have remained a constant in Abi’s life - a befuddling yet oddly comforting voice through her family’s grief over her brother’s disappearance, a move across continents, the devastating dissolution of her marriage, and the new beginning as a single mother and café owner in Sydney.

Now, two decades after receiving those first pages, Abi is invited to an all-expenses paid weekend retreat to learn “the truth” about the Guidebook. It’s an opportunity too intriguing to refuse. If everything is connected, then surely the twin mysteries of the Guidebook and a missing brother must be linked?

What follows is completely the opposite of what Abi expected - but it will lead her on a journey of discovery that will change her life - and enchant listeners. Gravity Is the Thing is a smart, unusual, wickedly funny novel about the search for happiness that will break your heart into a million pieces and put it back together, bigger and better than before.

Wonderful book, and an exceptional narrator!

I loved every minute of this book - a beautiful story, told with interesting, fun and funny language, and read by Aimee Horne, who is my new favorite narrator. This is one I wanted to keep going on forever - I’ll miss this world! Listen to this one!!

Wow. This is an amazing novel! I really don't get some of the mediocre reviews. Such depth and humor!! I can't believe I almost passed this up.

I almost stopped listening several times but almost like being unable to turn away from watching something horrible happening I just had to finish. So many choppy chapters too many minuscule thoughts and I am just not a fan. On the upside I enjoyed the narrator Aimee Horne very much!

I loved this book- it’s something I wouldn’t have chosen for myself but a member of my book club chose it. It started off in a way that made me laugh but I was crying by the end. So beautifully written- unexpected turns and dips. It is well worth the read and I’m so glad I did

Complicated plot with lots of characters, twists and turns. I would recommend it only as a beach book.

Good story, Interesting premise. I love The Moriarty Sisters. On to the next great BOOK

Wacky, but warm and touching.

The narrator made this book; she was WONDERFUL!
Characters were fun/wacky, enjoyable read, worthwhile.

So unique & beautiful. Never read anything quite like it. Humorous but also deeply moving. Loved so many of the characters - wish I could go to ‘flight school’ with them! So clever how the small moments and seemingly minor details came back around later in the story. Didn’t want it to end.

The story & the narrating performance were simply wonderful.
As simple as it was complex, this is a wonderful book full of heartbreak, deep, thoughtful musings, and fanciful ideas full of thought provoking messages.

I was really looking forward to this book based on the description of the story. Unfortunately the execution didn't work. The odd disjoined writing style, the rambling story, the unlikable characters, the trite way the mystery of her brother's disappearance and the strange ending really weren't for me. I don't know what this writing style would be called (and I'd love to know so I avoid it in the future). The narrator was good but she certainly couldn't salvage the story.

Compared to her sisters books this one is very boring. I was waiting for over 4 hours that the story will change to a more captivate narrative. Now I stop listening as I don’t want to waste my time any longer.