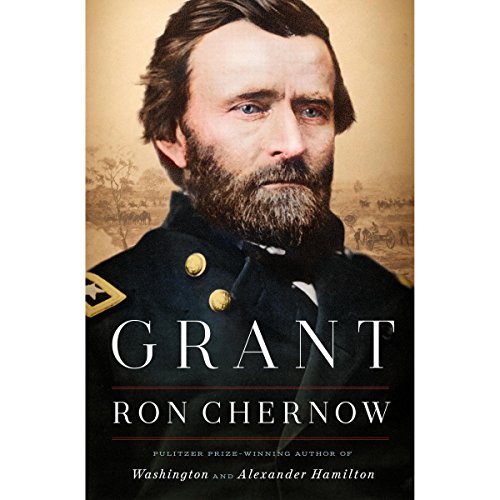 Pulitzer Prize winner Ron Chernow returns with a sweeping and dramatic portrait of one of our most compelling generals and presidents, Ulysses S. Grant.

Ulysses S. Grant's life has typically been misunderstood. All too often he is caricatured as a chronic loser and an inept businessman, or as the triumphant but brutal Union general of the Civil War. But these stereotypes don't come close to capturing him, as Chernow shows in his masterful biography, the first to provide a complete understanding of the general and president whose fortunes rose and fell with dizzying speed and frequency.

Before the Civil War, Grant was flailing. His business ventures had ended dismally, and despite distinguished service in the Mexican War he ended up resigning from the army in disgrace amid recurring accusations of drunkenness. But in war, Grant began to realize his remarkable potential, soaring through the ranks of the Union army, prevailing at the battle of Shiloh and in the Vicksburg campaign, and ultimately defeating the legendary Confederate general Robert E. Lee. Along the way, Grant endeared himself to President Lincoln and became his most trusted general and the strategic genius of the war effort. Grant’s military fame translated into a two-term presidency, but one plagued by corruption scandals involving his closest staff members.

More important, he sought freedom and justice for black Americans, working to crush the Ku Klux Klan and earning the admiration of Frederick Douglass, who called him “the vigilant, firm, impartial, and wise protector of my race”. After his presidency, he was again brought low by a dashing young swindler on Wall Street, only to resuscitate his image by working with Mark Twain to publish his memoirs, which are recognized as a masterpiece of the genre.

With lucidity, breadth, and meticulousness, Chernow finds the threads that bind these disparate stories together, shedding new light on the man whom Walt Whitman described as “nothing heroic...and yet the greatest hero".” Chernow’s probing portrait of Grant's lifelong struggle with alcoholism transforms our understanding of the man at the deepest level. This is America's greatest biographer, bringing movingly to life one of our finest but most underappreciated presidents. The definitive biography, Grant is a grand synthesis of painstaking research and literary brilliance that makes sense of all sides of Grant's life, explaining how this simple Midwesterner could at once be so ordinary and so extraordinary.

Named one of the best books of the year by Goodreads, Amazon, The New York Times, Newsday, BookPage, Barnes and Noble, and Wall Street Journal.

“Eminently readable but thick with import...Grant hits like a Mack truck of knowledge.” (Ta-Nehisi Coates, The Atlantic)

“A stupendous new biography ... Fascinating and immensely readable ... uncommonly compelling and timely .... Chernow’s biography is replete with fascinating details and insight­ful political analysis, a combination that brings Grant and his time to life ... put Grant on your must-read list.” (BookPage)

“The definitive biography for the foreseeable future.” (Publishers Weekly")

Such an underrated presidency! History always talks about Lincoln but we never hear about the aftermath at that time. Grant led an amazing life and this was wonderfully illustrated!

loved it so much i listened to it twice.
my comments cant do it justice.
Read this & learn a little about life.

I thoroughly enjoyed Grant. Great history, lessons of humanity, and awe inspiring courage in the face of dark times.

A comprehensive study of US Grant

Mr. Chernow brings a well detailed narrative to the listener, about one of the most controversial people in our nation’s history, Ulysses S. Grant. Utilizing first person accounts from those who new him, and primary sources of his time, Chernow takes us on a chronological journey of the man’s life. Writing of his life as young man, through his early military career, Civil War generalship, the presidency and post career. While taking side trips looking at his family, friendships, and personal demons.

Mark Bramhall’s performance was clear and inspired. Overall, a great book to spend your commute listening to, as I did.

For me, Ron Chernow made the iconic Civil War general into a very human man. The detailed, well researched biography provided a picture of Grant that goes beyond his military life, including financial downfalls that Grant never mentioned in his autobiography. Well done!

Compelling story of an American Icon

Having just finished Chernow’s Hamilton I was wanting more. So to Grant I appreciate the nuances of personality the author pulls through the facts. Reading Grants memoir at the same time I feel that these two books provide a fairly complete portrait of this famous American who was so gifted and flawed. I listened to the abridged version which I felt was quite complete. With this background on the politics of 19th century America my next read is Chernows Titan, the story of John D Rockefeller Sr which should give a good picture of how the economy of America changed in the last part of the 19th century as a result of the Civil War. I find it charming that Chernow so loves his subjects while also presenting the good and not-so-good of them as people. And now I wonder if Lin Manuel Miranda has read Grant. Could be a good musical. As an FYI - 25% of the 2 million Union soldiers were immigrants!

Having read or listened to many words written about General Grant, I find this one of the best.

A gigantic man and even larger book

Love the presentation. The narration was superb. Being a history buff it made more interested in Post Civil War America.

I consider myself to be a relatively decent student of History.... I had no idea the impact and importance of this man .... very well done;

5 stars in all categories

Excellent read. 5 stars in every way. Amazing to read about “great” people. No surprise that they all had blind spots in life just like the rest of us. Grant, tho had a huge heart to match his military brilliance.