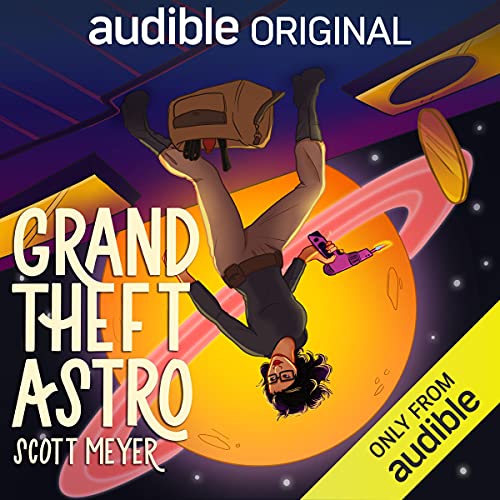 From the author of the “Magic 2.0” series comes an outer space caper where it’s the thief who’s having something stolen from her - her life.

It is the distant future, and Baird is a loner, a part time spy, and a notorious alleged thief. “Notorious” for the audacity of her crimes; “alleged” because nobody has ever been able to legally prove she committed any of them.

When the hush-hush agency known as the Toolbox recruits Baird, being a clandestine operative seems like a great way to get paid to do what she already does anyway. That is, until a mission goes wrong, and Baird is infected with a deadly virus. With only seven days to live, Baird has to complete a series of daring missions, each one designed to bring her closer to a cure.

Baird suspects the Toolbox might not be telling her the whole truth. She's not sure what to believe or who to trust.

And the clock is ticking.

I almost passed up this gem because of two reviews complaining about how the narrator repeatedly mispronounced the word goggles. Turns out that’s not true, and thank goodness I decided to listen for myself because this is a fine book with a very talented narrator. Apparently these picky reviewers weren’t listening closely, because it’s clearly explained that the main character is wearing augmented reality glasses sold under the brand name gARgles. It’s like the brand Gargoyles combined with goggles and a little AR thrown in. Pretty clever - and really an unfounded reason for negative feedback. This book is a fun romp.

I loved this book! It was really interesting and kept me curious and engaged. I would definitely recommend checking it out. Also I say in the other review about goggles being pronounced gargles, this is explained in the story. These are AR goggles and it’s the brand name. gARgles. They literally even explain how it’s written.

gARgles is a brand name!!!

Those negative reviews complaining about the narrator’s supposed mispronunciation of “goggles”…seriously? The author explains the brand name “gARgles” within the first half-hour. Look, I get being distracted while listening to an audiobook and missing important details. But that’s why the Audible app has those handy little circular arrows, so you can go back and clarify something that isn’t making sense. Like, for example, if the narrator inexplicably seems to be adding an R to the word “goggles”. Guess what? It’s not so inexplicable. It’s overtly and easily explicable. SMH

Really super for a freebie!

Not a lot of LOL, but this is a clever and engaging story with nice twisty ending. Superb narration from Elizabeth Evans - beautiful voice for the narrative and great, distinctive voices for characters.

Fun to listen to

The story was fun, and it was easy to visualize and follow along while crafting.

A welcome balance of silly and seriousness

As an enormous fan of his Magic 2.0 audiobook series, I did not hesitate when I saw Meyer's name appear as the author of this work and immediately got to listening. At first I was a bit disappointed that it didn't have the same level of persistent silly fun that I had come to expect from his previous work, but that feeling didn't last long as his character and world-building really took hold. I will admit that my attention wandered at times throughout the piece (when not flawlessly voicing the various characters, the narrator's voice struck me as overly dry at times), but the action was always satisfying enough to recapture my focus before too long. I would recommend this to anyone who doesn't mind a fat helping of silly (but thoughtfully delivered) nonsense with their main course of rushed high-tech criminal infiltrations. At this time I do not know if this will be the first of a series, but if so I will certainly be eager to pick up whatever follows!

Love it, but just one little thing....

I love this book, but the narrator kept pronouncing "googles", "gargles". Where in the world is the R in goggles??? I took away one star for the Performance because if the mystery R's.

More “serious” than his other works

There’s a 25% chance I’m biased because of the deadpan delivery of the narrator and it’s hard for me to ingest Meyer’s humor without Luke Daniels. That aside, while there are humorous elements to the story and the way it unfolds, it’s not as comical as the off to be the wizard series, ludicrous as master of formalities, ridiculous as the authorities, or as solid as run program, it is however quite cool and shows a lot of potential for more novels. I ❤️ Scott, please don’t hate my review.

Good crime caper with a mystery twist, unfortunately drags on a little in the middle.