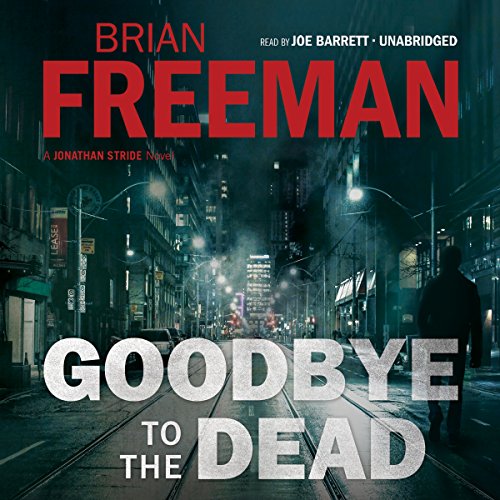 Goodbye to the Dead

Goodbye to the Dead

It has been almost a decade since Duluth said good-bye to its innocence. The city creeps ever closer to the 10th anniversary of the year in which it found itself both gripped by murder and united in terror and during which the pillar of its community, DS Jonathan Stride, had his home and heart torn to ribbons by the claws of cancer.

Cat Mateo, an orphan with a knack for landing on her feet, has bid farewell to a life on the streets. This once-stray teenager owes her rescue to Detective Stride, the father figure she holds close to her heart. But Cat holds something else to her chest: a secret, the sheer power of which she could not possibly comprehend. A secret that, once out of the bag, will viciously scratch at Duluth's still-healing wounds. It will make Stride wave good-bye to his convictions and say hello to his darkest fears.

JUST GET THE BOOK!

Joe Barrett gave an Excellent performance! He is a wonderful narrator and I wish he would do more mystery/thriller books. I would purchase them for him alone!

I didn't want this book to end. Brian Freeman is such a talented author, and this was such a good book. There are four major plots going on and a few minor conflicts in the background that all appear to be independent story lines. They aren't independent and all culminate in the final chapter giving this Stride book an explosive ending.
The book begins 9 years in the past when Stride's wife Cindy is still alive and jumps forward to his relationship with Serena Dial. In the center of it all is house guest pregnant teen Cat Mateo. This story has it all. Betrayal, murder, adultery, lost love, human trafficking and catfishing - who could ask for more? If you're familiar with the previous books you'll know there has been a major rift between Serena and Maggie. In this book there is the start to a reconciliation. Jonathan Stride also finally gets the stirrings to move on and realizes that his deceased wife would not want him pining away for her all these years later. Lots of revelations that I won't name. Like I said REALLY GOOD BOOK.
HIGHLY RECOMMENDED.
If you found this review helpful please indicate so.
Thank You.

I couldn't stop listening to this book! I love so much about Brian Freeman's writing, especially his ability to make you "feel" the surroundings as you're listening. He has a great talent for describing key minor details that make the scene feel real. And that's just the icing on top of a fantastic story with a ton of twists and turns that literally kept me guessing to the end. Just when I thought I figured out "whodunit," I found out shortly that I was wrong and pleasantly so. In addition, Joe Barrett is THE voice of the Stride novels now and I think his style matches the material perfectly. If you're looking for a great mystery story and a wonderful feel for the surroundings of Duluth, then this is the book for you. Highly recommended.

Goodbye to the Dead has everything. It is a murder mystery, there is intrigue, the suspense is great, there is lots of action, and finally there are great personal stories. The author makes the effort to fully develop the characters. This is a must read page turner. Joe Barrett does an excellent job of narration although I am not a fan of the slight nasal sound of his voice.

I have spent a lot of time finding Audible listeners to follow for recommendations. My favorite genres are espionage and police mystery/thrillers. I now get many of my recommendations by reading Shelley reviews. This is the 10th book I have listened to based solely on her reviews. All have been wonderful! Thanks, Shelley! If your tastes are in the espionage and police mystery/thriller area, you may want to follow her and read her reviews; and give her credit by checking the "YES" box when her reviews are helpful (Just to clarify, I am NOT acquainted with Shelley. My comments are based solely on reading her reviews.)

Following me is likely a bad idea unless you turn off the automatic emails in Account Details because I average more than a review a day. Also, i listen to lots of novels of other genres as well as non-fiction.

I love Brian Freeman's novels. They're a guilty pleasure. Very entertaining and fun to listen too. Not great literature, but he's a wonderful storyteller. I like the narrator too.

Another Good Installment To The Series

I have finished my binge listening of the Jonathan Stride series! Wow, what a ride! I am so looking forward to the next book! I listened to this book in 3 days because I couldn't bear to.put it down. However, I am disappointed that Stride was so cold and indifferent to Cindy when she wanted to talk to him on the beach about her cancer diagnosis. She didn't get to. I am left wondering how all of that was resolved and what happened when he found out. Maybe the next book will deal with that. I thought they were closer than that. Stride didn't sit well with me in this book as he seemed emotionally unavailable to me. Maggie needs some updating and not made to sound like an immature character. I don't care for the Cat character but maybe she will grow on me in later books. Otherwise, I loved this book!

Joe Barrett was outstanding with the delivery of the story

Intriguing as all of Brian's are so Executed!

I believe one of his absolute best but then
I am so easily drawn because he fascinates.

I love all of his books and this one did not disappoint. Great story that always had me excited for the next chapter.

There's a good mystery in there but unfortunately it is smothered in soap opera stuff.

Best In The Series!

Awesome addition to the Jonathan Stride series! A large portion of the book focuses on the years just before Stride's wife Cindy passes away, and it was nice to get to know her character rather than just hearing about her from Stride's point of view. Stride is still struggling to come to terms with her death and truly move on, and he is more emotional and vulnerable than usual, which is nice. Joe Barrett is just phenomenal. The best person to narrate this series, hands down!

Let me count the ways I love Joe Barrett.

As a native Minnesotan I cringe at most attempts to do the accent. The usual mistake is overdoing it. I thought Joe Barrett must have been one of us-so subtle and understated were his Minnesota voices. Then, in search of more Joe Barrett, I discovered all the east coast, Italian,New York and mob voices in the Don Winslow books. I have deeply enjoyed them all. Joe Barrett, you can read to me all day!