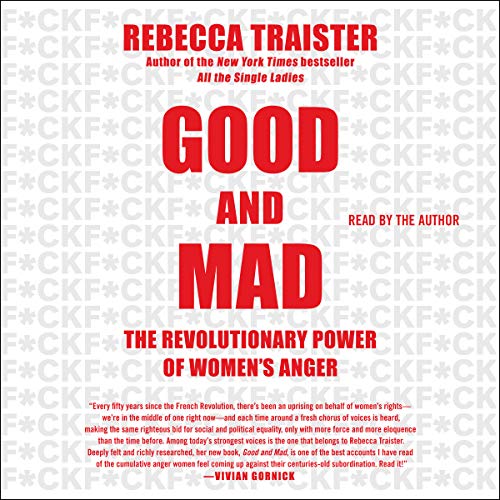 From Rebecca Traister, the New York Times best-selling author of All the Single Ladies - whom Anne Lamott called “the most brilliant voice on feminism in this country” - comes a vital, incisive exploration into the transformative power of female anger and its ability to transcend into a political movement.

In the year 2018, it seems as if women’s anger has suddenly erupted into the public conversation. But long before Pantsuit Nation, before the Women’s March, and before the #MeToo movement, women’s anger was not only politically catalytic - but politically problematic. The story of female fury and its cultural significance demonstrates the long history of bitter resentment that has enshrouded women’s slow rise to political power in America, as well as the ways that anger is received when it comes from women as opposed to when it comes from men.

With eloquence and fervor, Rebecca tracks the history of female anger as political fuel - from suffragettes chaining themselves to the White House to office workers vacating their buildings after Clarence Thomas was confirmed to the Supreme Court. Here Traister explores women’s anger at both men and other women; anger between ideological allies and foes; the varied ways anger is perceived based on its owner; as well as the history of caricaturing and delegitimizing female anger; and the way women’s collective fury has become transformative political fuel - as is most certainly occurring today. She deconstructs society’s (and the media’s) condemnation of female emotion (notably, rage) and the impact of their resulting repercussions.

Highlighting a double standard perpetuated against women by all sexes, and its disastrous, stultifying effect, Traister’s latest is timely and crucial. It offers a glimpse into the galvanizing force of women’s collective anger, which, when harnessed, can change history.

"Rebecca Traister's steady and powerful narration lends strength to her chronicle of women's anger.... It is a deeply researched study, and Traister's narration clearly reframes key moments in history from a perspective different from those typically taught in history class." (AudioFile)

The perfect book for October 2018.

I've been listening to Good and Mad all day ... it's like having my best friend speaking into my ears, full of wisdom and savvy and, yes, rage. This is the book we need, now and for the foreseeable future. I already plan to give copies to everyone I can think of. It's somehow both soothing and energizing, both infuriating and deeply comforting. Things are put into context and thus it becomes possible to confront them.

(As it happens, my real best friend died of multiple myeloma in the summer of 2016. She didn't live to see Trump elected, or Sally Yates fired, or Elizabeth Warren told on the senate floor to shut up. She missed the whole MeToo movement. She didn't witness Parkland or the March for Our Lives. She didn't see Bill Cosby get convicted of rape. She never knew what it's like to wake up every day and be disgusted at the spectacle we face, or afraid that it may get worse. She probably never heard of Brett Kavanaugh, but I know she'd have liked Christine Blasey Ford. She was a lifelong ball of fury when it came to issues of justice and equality, and until I started listening to Rebecca Traister read this book, I didn't even know how much I still miss her.

I'm sharing all that to let you know that it feels like Good and Mad might be one of those books that's more than a book ... it might be the catalyst that launches an unstoppable reaction. Get it. Read it. Listen to it. Share it!)

This book must be read!! I’ve been mad since the ‘70’s as an out lesbian feminist but since 2016 I’ve been an angry woman-sick of the harassment and abuse I’ve both experienced and witnessed. I am a congenial, likeable person but I’ve often been accused of being “so angry”. Thank you, Rebecca Traister for not only affirming that anger but giving the historical and contemporary context in which to UNDERSTAND and USE it!! Highly recommended to every woman with a pulse.

Released new clarity and power in myself

Thank you for writing this book. My 35 year old daughter sent me an article by you , telling me you were one of her favorite journalist . I always pay attention to what my daughter recommends to me . I looked up more about you after loving the article , finding out you just released a new book , got it immediately and was riveted. It is an important message for this 65 year old me , one who could not call myself a feminist until very very recently , though raised in CA and where my own mom identified as such when I was my daughter's age. Some things take a long time to learn! Now I identify more as a 35+ year old . Your book is a guide for me .

this book reminds me of why I was grumpy in the 70s-80s and why I'm mad again.

A great explanation of female perspectives that as an old white man I was clueless.

I have been waiting for a book like this

A text for women of all ages and those who love them, Traister's words are insightful and incisive. They are a clear-eyed affirmation of the righteous indignation most women are feeling now. She gives it context both historically and presently, blowing away the gaslighting of the last 40 years.

TIME IS UP FOR OLD WHITE MEN

I know in my heart that every word in this book is true. it is my hope that every woman will read this book and come to the conclusion that the old white men that's been in power need to be held responsible. VOTE THEM OUT.

A wonderfully researched and articulated description of the historical impact of angry women and our position to pursue and enlist that anger today. For change.

I saw an interview with the author on The Daily Show and was enamored by her thoughtful explanations of some really complicated emotions I was feeling. I knew I had to read this book, and I couldn't stop once I started. Great stories combined with things to think about and ways to grow!

THE most important read of 2018!!
Traister’s refreshingly intersectional lens gives perspective and voice to a diverse swath of the femme experience with anger and action.

The best book I’ve ever listen to! It will have an impact on me!!!! 🖤 Thank you so much Rebecca Traister