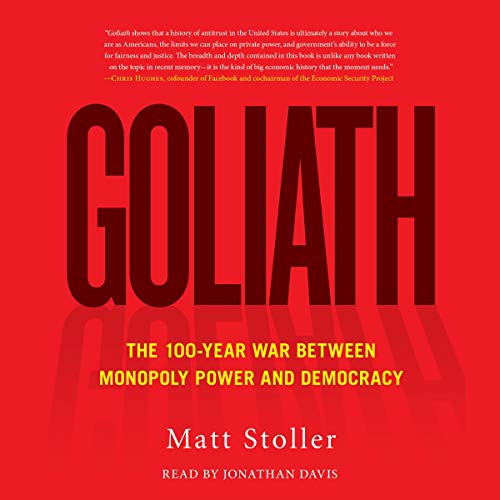 “Every thinking American must read” (The Washington Book Review) this startling and “insightful” (The New York Times) look at how concentrated financial power and consumerism has transformed American politics and business.

Going back to our country’s founding, Americans once had a coherent and clear understanding of political tyranny, one crafted by Thomas Jefferson and updated for the industrial age by Louis Brandeis. A concentration of power - whether by government or banks - was understood as autocratic and dangerous to individual liberty and democracy. In the 1930s, people observed that the Great Depression was caused by financial concentration in the hands of a few whose misuse of their power induced a financial collapse. They drew on this tradition to craft the New Deal.

In Goliath, Matt Stoller explains how authoritarianism and populism have returned to American politics for the first time in 80 years, as the outcome of the 2016 election shook our faith in democratic institutions. It has brought to the fore dangerous forces that many modern Americans never even knew existed. Today’s bitter recriminations and panic represent more than just fear of the future, they reflect a basic confusion about what is happening and the historical backstory that brought us to this moment.

The true effects of populism, a shrinking middle class, and concentrated financial wealth are only just beginning to manifest themselves under the current administrations. The lessons of Stoller’s study will only grow more relevant as time passes. “An engaging call to arms” (Kirkus Reviews), Stoller illustrates here in rich detail how we arrived at this tenuous moment and the steps we must take to create a new democracy.

The Fall of American Populist Economics

Goliath is a strange book because it proposes populist economics as separate strain of economic theory from the statist central management of New Dealers, and the winner take all pro-business, free market approach of the libertarian influenced Republicans. Stoller makes a fairly good case and because of its originality is worth a read by conservatives, liberals, progressives, and libertarians.

Regardless of where you are on the political spectrum it will make you think. He is generally tough on conservatives, especially during the 1920s, and he is even tougher on libertarians, but he offers solid evidence to support his position. That is not surprising, but what was really interesting was his attacks on Teddy Roosevelt, the New Deal, JFK, LBJ, Clinton, and Obama, and his generally positive takes on Truman, Ike, and Nixon. He even said one or two sort of nice things about Trump!

Stoller is not as strong when he moves beyond economics and he really does not dig deeply into the fundamental issues shaping the liberal and conservative visions of the American economy. Furthermore, like many revisionists, he often fails to consider the time and place his subjects were actually living. This is particularly true in his attacks on Teddy Roosevelt.

But it is definitely worth a read by anyone interested in politics, economics, or American history. He will attack your heroes and your villains, because his point of view is so firmly populist and he does not hold to the conservative and liberal paradigm we are all so used to.

I wish the entire book were more like the conclusion

Great book. I learned so much. I just wish each chapter had more of a framing for what you were supposed to get from each era of history. The conclusion put it all together eventually but I feel the rest of it would’ve felt more cohesive if there was more analysis.

This was a fantastic listen. I thought it was well written and heavily detailed. At times it got pretty dense but the flow from the late 1800s to present and all the players, presidents, bankers, trends, and politics involved was fascinating. History doesn’t repeat itself but it sure rhymes. The description of what America was like 100 years ago is almost a mirror image of what’s happening to us now. Highly recommend.

Kind of boring but important. The book seems more of a summary than an interesting theory or story. Could be better.

At its core, Goliath is many stories: The story of Texarkana Congressman Wright Payment and his decades of work fighting against monopoly. It is also the story of robber barons and the sheer indifference of corporations until government intervened. Finally, it is the story of how elected leaders, while not all at once, ditched the solid principles of The New Deal, a set of policies that, when backed by antitrust, led to widespread economic prosperity.

Throughout the audiobook, you hear a wonderful performance by Jonathan Davis as he goes through a century starting off with the first Roosevelt and concluding with the Obama administration. There were moments when I would see historical events through the lens of antitrust. At the beginning, you learn of FDRs refusal to work with Hoover (because Hoover was against the New Deal reforms). Near the end, you hear the historical revisionism of that moment as explained by Obama.

Overall, I believe that this book will become more and more important as the years pass; things look dire, but it can be turned around.

The author rightly highlights market corruption, but naively views government as the solution and sees populism through a liberal agenda, as if returning power to the people will automatically lead to climate legislation, transgender celebration, and every other far-left objective.

A very important book on the history of monopoly in America. Everyone wondering why they economy has become so controlled by so few over the past 40 years needs to read this.

This is very original and comprehensive prospective of corporate monopoly and its relation to a constant struggle for democracy.

Well written and compelling. Changed my ideas about corporate democrats. Could be a bit shorter though. Overall good read