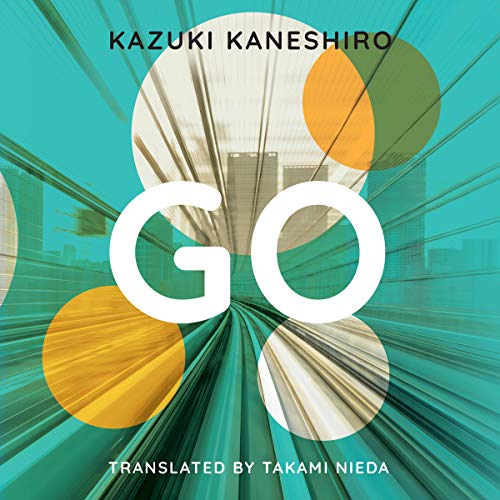 As a Korean student in a Japanese high school, Sugihara has had to defend himself against all kinds of bullies. But nothing could have prepared him for the heartache he feels when he falls hopelessly in love with a Japanese girl named Sakurai. Immersed in their shared love for classical music and foreign movies, the two gradually grow closer and closer.

One night, after being hit by personal tragedy, Sugihara reveals to Sakurai that he is not Japanese - as his name might indicate.

Torn between a chance at self-discovery that he’s ready to seize and the prejudices of others that he can’t control, Sugihara must decide who he wants to be and where he wants to go next. Will Sakurai be able to confront her own bias and accompany him on his journey?

loved it. as a both Korean and Japanese speaker surprised by the fact that the narrator pronounced these two languages so fluently and correctly.

I loved this story, how well it is plotted, characterized, and performed. Despite taking place in Japan, the points on nationalism, the human condition, and the people caught in the middle are ever more relevant.

Koreans in Japan After WW-II

Enjoyed & learned about very interesting story...I must admit that I never thought about life in Japan as 2nd generation of Koreans. Not going into spoilers, I thought it was very interesting story about Korean (South, North, then South again) kid growing up in Japan treated as 2nd citizen, etc. BTW, LOVED ending! ✌

Sugihara is a student in a Japanese high school, but he's not Japanese. Born, raised, and educated in Japan, he is still Korean, a citizen of South Korea, and legally a resident alien. This places some legal restrictions on him; it also makes him a target of bullying and prejudice.

He has had to become a fighter, while keeping his eyes on the prize of passing the entrance exams for a Japanese university. When he meets and falls in love with a Japanese girl named Sakurai, they bond over classical music and foreign films.

But she doesn't know he's Korean, until, after a personal tragedy in his own life, he finally tells her.

Anti-Korean prejudice runs deep in Japan, and it's not clear that Sakurai will be able to overcome it in herself, or even want to.

This is a short novel, and a novel of first love, but it is so much more than that. It captures, effectively and without a heavy hand, the complexities of being a foreigner in the only country Sugihara knows, the ways it has affected his parents, especially his father, and both the bonds and the conflicts in his relationship with his father.

I found it both enjoyable and enlightening. Recommended.

I bought this audiobook.

A story about racism, ethnic hatred and love

Is great how the author use a love story to express his point of how there are not basis for racism, though it hurt to think this may be an autobiographical story in any level.

I generally enjoyed listening to this book. This is a general statement to meet requirements that don't allow for a simple star rating.

I enjoyed this story from the Orient, it's sad how this irrational prejudice is all over the world.

I would recommend this book

The narrator was excellent.

As an American steeped in American culture I generally view discrimination through an American lens. But what about those in other countries? How might discrimination take a different form? A chance to take a peek into a different world is presented in this novel, about an ethnically Korean student living in Japan. As it starts with comparisons to Romeo and Juliet and focuses on a love affair between two high school students, there's something a bit YA fiction about this and I'm not sure how it would be shelved if it was an American novel. But regardless of if its Japanese YA or not, it was an interesting and worthwhile listen.

this is a fascinating story with many layers. Very well told and very well written..

Great voice actor, didn't enjoy all of the story.

This was one of the free ebooks that I then bought the audible version for. I don't think I would have finished the ebook based on what I listened to. I continued listening because I hoped it would get better.