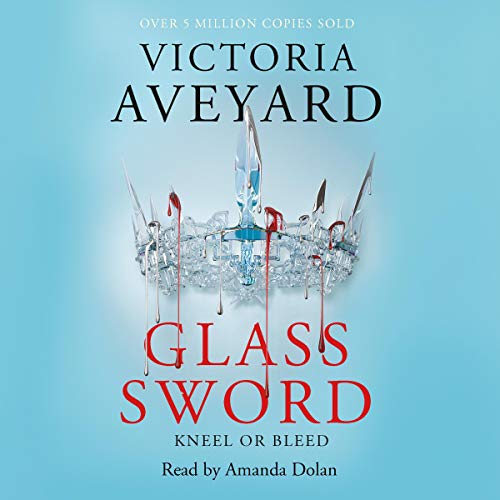 If there's one thing Mare Barrow knows, it's that she's different.

Mare's blood is red - the colour of common folk - but her Silver ability, the power to control lightning, has turned her into a weapon that the royal court tries to control.

The crown calls her an impossibility, a fake, but as she makes her escape from the prince and friend who betrayed her, Mare uncovers something startling: she is not the only one of her kind.

Pursued by the Silver king, Mare sets out to find and recruit other Red and Silver fighters to join in the struggle against her oppressors.

But Mare finds herself on a deadly path, at risk of becoming exactly the kind of monster she is trying to defeat. Will she shatter under the weight of the lives that are the cost of rebellion? Or have treachery and betrayal hardened her forever?

What other book might you compare Glass Sword to and why?

Glass Sword seems to me like a mix of the movie "X-men: First Class" and Leigh Bardugo's Grisha Trilogy (Especially the 2nd book - Siege and Storm). Thus expect this book to have an equivalent to a recruitment and training montage and for the main character to be the sort-of leader of a group of super-powered individuals
Not to mention Mare is showing shades of Grisha Trilogy's Alina Starkov

I don't think Glass Sword is as good as the first book: Red Queen. But maybe that's just me. I certainly prefer the first book for it's deception and political intrigue within the palace. The second book shows Mare outside the palace. But I feel that the way the book handles Mare fighting back has certainly been done before (ie it's basically a mix of Alina Starkov readying the Grisha to fight the Darkling and Katniss Everdeen allowing her image to be used to fuel a rebellion). So I'm not particularly impressed with the majority of the book. This is not to say it was a bad book.

I think it's ok. There's certainly a lot of action going on in this book as Mare and her friends are being hunted by the King and finding ways to fight back.

However, none of the new characters introduced appealed to me. A lot of them are side characters and are kind of cardboard cut-outs of characters I've read before. Or maybe it's just because the whole book is from Mare's POV and Mare (unfortunately) intentionally And unintentionally never really let herself get close enough to know them better?

In any case, you might wonder why I even gave this book a 4 star rating.

This book could certainly have been better with a lot more MAVEN in my opinion. Not to say that I want Maven to win. Just saying that the plot only really picks up when Maven makes an actual appearance (however scant it is in this book).

Mare and Maven's twisted bond is a guilty pleasure of mine. I went into Glass Sword expecting to read on the aftermath of Maven's betrayal. And with regards to Mare and Maven, it did not disappoint me. And this is the main reason I'm looking forward to the third book

So to summarize:
Don't expect a lot of appearances from Maven. But do look out for them because if you like reading/listening to something similar to the Grisha Trilogy's Darking and Alina bond, you might like it every time Maven and Mare share a scene.

Liked to get to know more about the scarlet guard and the different abilities of new bloods. This is not over yet and I am excited for round 3.