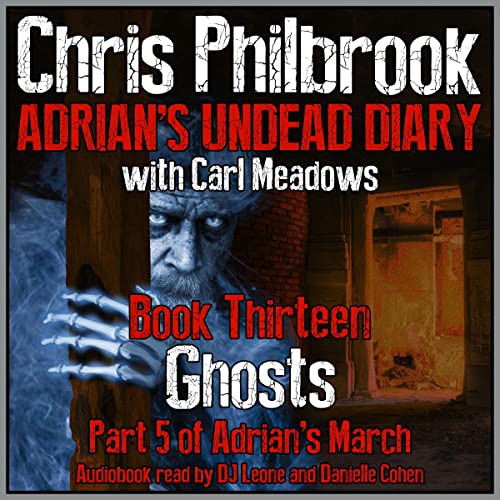 A weary Adrian Ring continues his dangerous push to find the missing members of the mythical second Trinity—saviors of mankind from the judgment of the undead. He’s fought those monsters for years now, facing off against unthinkable threats and challenges to his own safety and sanity, and thus far, he’s prevailed. Others around him haven’t been so lucky, but that seems to be his curse.

Now, as he and his precious friends foray north into the heart of England to find Hal Parker’s dad and search for survivors, they will encounter threats they’ve never dealt with before.

And worse yet, while they battle against faster and smarter armies of the dead and the wraiths of evil that now walk among them, a greater threat slips through the cracks and joins them.

And yet Adrian will meet a new light, Erin Locke—a beacon in the that darkness—and his encounter with her will change him for the better and alter the course of humanity’s grim fate.

With major contributions from Carl Meadows, author of Lockey vs. the Apocalypse, an Adrian’s Undead Diary series.

Ghosts contains Adrian’s personal journal entries from November 28, 2014 to January 1, 2015. Intermixed with those diary entries are the short stories: "A Mother’s Love", "Be Someone Special", "Bring Me That Horizon", "Sabotage", "The Paladin", and "Now You See Me".

This Book is so fantastic. What a ride. I absolutely love this colab between Chris and Carl. What a great book

Adrian,Lockey and Nate are a perfect match!

Adrian finally hooks up with Lockey and Nate and this combo can't be stopped! I gotta admit that Fagan guy is one lucky man! The ending is absolutely brutal and you will never expect it! I still can't believe a Ring would go down like that! Another great addition to this series!

You know how you're reading a good book thats so good that when it gets to the end you keep flipping pages back and forth like you think you missed some pages?Maybe the printing company forgot to add the pages you were expecting to flip to? Because how could it end here? How? TELL ME HOW?!! Well. I know that feeling and now i know that feeling while listening to it. First time I have ever yelled at my car and rewound then checked the chapter list then yelled at my car again. Ahem, of course not while driving! Moving on. This book and the voice narrators are so good I lost track of time and got mad when it ended. Of course if you've read/listened this far you already know how freakin' amazing this series is. Ghost does not disappoint.

Absolutely loved this 13th book thirteen's book Mr. Philbrook has outdone himself again not to mention Mr. Meadows. And as always the narration from both narrators were top notch

just a little taken aback by the different narrator. overall good story as usual. Can't wait till the next installment.

Another great story..ending is killing me. what happens next..on the edge of my seat again

I am always excited to see what Adrian and the gang are going to get into next. Awesome read. Once I started I didn't stop till the end. huge fan

Could not stop listening

The absolute worst aspect of this Audiobook is watching the remaining time count down. The story had me on the edge of my seat the entire time, and I was so engaged I could not stop listening. Dead cities left me unsatisfied with the progression of the story, but it's set up pays off in spades in Ghosts.

one more amazing addition to the series

Once again Chris Philbrook has added to the world of Aidan and crew in this epic spine chilling addition to the Adrian's undead diary world.

Love the series but not long enough

I love this series, but I can’t listen to this narrator
And the story was too short compared to the others we still don’t have a handle on what is happening with any of the Characters
It’s unfortunate I’m kind of disappointed with this one