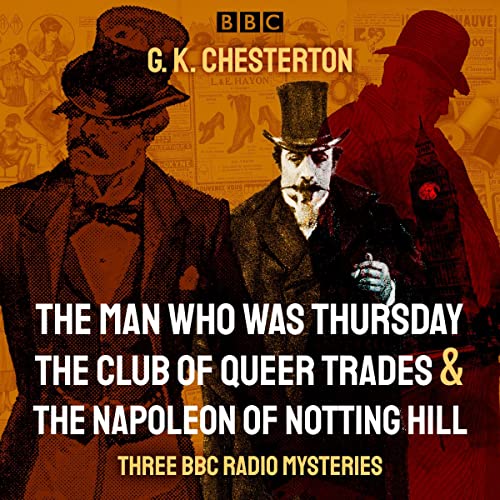 Best known as the creator of clerical detective Father Brown, G. K. Chesterton was a prolific and talented writer in virtually every area of literature: from novels, poetry and short stories to plays, biographies and essays. A noted thinker, controversialist, raconteur and wit, he has influenced authors from Neil Gaiman to Jorge Luis Borges. This collection comprises his two most famous novels, The Man Who Was Thursday and The Napoleon of Notting Hill, as well as half a dozen tales from his short story collection, The Club of Queer Trades.

The Man Who Was Thursday - Poet-turned-Scotland-Yard-detective Gabriel Syme goes undercover in Edwardian London to investigate a secret society of anarchists—all of whom are named after days of the week.... Read by Geoffrey Palmer.

The Club of Queer Trades - In these six full-cast comedy crime dramas, retired KC Basil Grant, his brother Rupert and friend Charlie Swinburne explore the extraordinary stories of people who earn their living by some novel and unusual means. Starring David Warner as Basil, Martin Freeman as Rupert and Geoffrey McGivern as Charlie.

The Napoleon of Notting Hill - Written in 1904, Chesterton's comic political satire is set in London 80 years on. The city is still full of horse-buses and hansom cabs, but democracy is dead and the King is chosen by lottery. No one cares, because none of it matters—until the choice falls on Auberon Quin.... This full-cast drama stars Roger Hammond as G. K. Chesterton and David Collings as Auberon Quin, with Kim Wall, Stuart Organ and Paul McGann.

The Man Who Was Thursday

The Club of Queer Trades

The Napoleon of Notting Hill