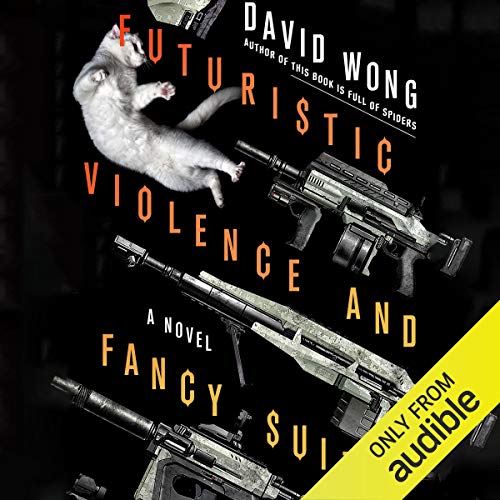 In a prosperous yet gruesomely violent near future, superhero vigilantes battle thugs whose heads are full of supervillain fantasies. The peace is kept by a team of smooth, well-dressed negotiators called The Men in Fancy Suits. Meanwhile a young girl is caught in the middle and thinks the whole thing is ridiculous.

Zoey, a recent college graduate with a worthless degree, makes a reluctant trip into the city after hearing that her estranged con artist father died in a mysterious yet spectacular way. There she finds that her scumbag dad had actually, in the final years of his life, put his amazing talent for hustling to good use: He was one of the founding members of the Fancy Suits and died in the course of his duties. Zoey is quickly entangled in the city's surreal mob war when she is taken hostage by a particularly crazy villain who imagines himself to be a Dr. Doom-level mastermind. The villain is demanding information about Zoe's father when she is rescued by The Fancy Suits. She reluctantly joins their cause and helps finish what her old man started, tapping in to her innate talent for bullshit that she inherited from her hated father. And along the way, she might just have to learn how to trust people again.

I am typically a fan of Wong's not-so-subtle humor, but this one missed the mark. While fart jokes and silliness juxtaposed with life or death situations are typical of Wong's, many of the gags in this book felt forced or out of place. I just didn't laugh as much as I did with "John Dies" or "Spiders." Also, the theme seemed to revolve around the resilience of feminism in the face of unrepentant misogyny. Although the effort was earnest, I don't think it landed as intended. The main character was a bit flat and came off as indifference peppered with poor foresight. While she overcame some significant challenges, it was mostly due to dumb luck or the actions of others. The rest of the cast seemed tightly focused, but trudging through the story from Zoe's perspective felt like a chore. Even the detestable villian was slightly more layered than the protagonist, even though he was a shallow husk of misogyny personified. Overall, the setting, supporting cast, and interesting themes of the story were notable, but they were all held back by an uninteresting, sometimes insufferable hero.

This book is actually well written conceptually and most of the characters are thoughtfully rendered... With the exception of the main character, who consistently makes the most boneheaded decisions for two thirds of the book.. I realize that the author designed the main character to be naive and clueless entering a brand new environment, but damn there's a difference between naive and frustratingly stupid.

I also wish that more of the side characters had detailed back-stories. Because they were all way more likeable than the main character and only a few had any history revealed about them and why they were so loyal to the Livingston empire.

Story is mostly "ok" dragged down to "meh", as chapters ping pong between exposition dumps and smug, self important monologues that border on preaching. What worked in 'John Dies at the End' was that these portentous speaches and stories were a punchline, as the characters would take the piss out of it. Here, everyone goes into high-school level "Real Talk" on the drop of a hat and its played dead fucking strait.

And by far the worst performance I heard so far on Audible. Tip to amateur VAs, if you can't do accents then DON'T. The character voices incredibly cliche, as if they were meant to be limp parodies of what they should've been. But all ethic accents were delivered with the blunt insensitivity of a Michael Scott type not realizing how incredibly racist they were coming off. Yikes!

As good as the other books but narration needs wor

Christy does a decent job differentiating the characters and all. I agree with others comments about the odd pauses.

My main issue is the voices is that some of them sound like cartoon voices from my little pony. Other accents are overkilled and sound very valley-ish. Most characters sound like they hate their own existence and I don't think that's the authors intention. It's quite hard to take the characters seriously with these issues.

This whole city is a butt that farts horror.

I have read several books by David Wong before, and so I was very excited to start this one. A few minutes in, it was clear that it was in his usual style, that slightly vulgar, but still hysterical style that he wrote John Dies in the End, etc.

The story is in a futuristic place, where cars drive themselves and cell phones project holograms of the callers, but it’s still familiar enough that the characters can hit the Wendy’s drive-thru for some chili or botch an at-home hair dying job. Wong does a great job striking the perfect balance of the two. There are so many twists and turns, so hold on to the seat of your voice controlled car, and enjoy the ride.

Whether or not you’ve read any other books by David Wong before, this one will not disappoint, it’s a great book and a ton of fun to listen to.

Not as good as I was expecting

I love the John Dies at the End books, so I had high expectations for this book. Unfortunately, I did not find this book to be as funny or interesting. I think I might have enjoyed it a little more if it had been shorter.

Good for a laugh but the narration is rough.

The book itself is good enough. A chuckle worthy satire of tech-fetishist pop culture. You are definitely getting what it says on the tin. Lots of violence, lots of fancy suits.

Where the audiobook falls down is in the narration. The cadence is off-putting, you can hear every line break. often glaring cuts from one take to another in midsentence, killing all inflection and dialogue momentum. And no offense to ms Carlson-Romano, as I'm sure it was as much to do with direction as performance, but I would rather have a performer not do character voices if so many of them are going to come out sounding either very samey or borderline racist caricature.

I've loved the John Dies at the End series, but I didn't really enjoy this one. I can't be sure how much of that is attributable to the godawful narrator. She puts pauses in inappropriate places (such as the middle of a sentence), has strange inflection around those pauses so you can't tell if she's ending a sentence / staring a new one, and she has a number of irritating mispronunciations. If you're being paid to narrate an audiobook and you goof up a word, go back and re-record it for crying out loud.

It's hard to actually get past the terrible narration to even think about the content of what I just listened to, but I really didn't find the fish-out-of-water standard hero plot very entertaining, though the writing style was funny and engaging.

Enjoyed the book overall, plot was thin in places.

Enjoyed it overall. Plot had some pretty big holes that were left open. Places where characters didn't do things you know they really would have.

You keep going because you can almost taste what it was meant to be, but in the end you're left feeling unfulfilled and maybe a little sick. It's unsubtke, not nearly as funny as it thinks it is, and the plot meanders from setpiece to setpiece with the thinnest of convenient justifications to excuse it. All in all, not great.

The narration is equally unsubtle, saddling every non-white character with a borderline racist ethnic accent.

Wait for the beginning to be over!

I went from: 'Meehh' to 'not bad' to 'wow' to 'what the hell! Awesome!' and had really fun with this book. Read it, it's worth every penny.

Great entertainment and strong telling style.
Rough and futuristic story but not for everybody. Recommendation from my side.

i'm sad it's over

the beginning is not as catchy as one of the john dies at the end books. but after a while you get attached to the main character and the story really turns into a david wong story. the jokes in the book are also far less obvious than in his other books, but i feel like the irony and the sarcasm is sometimes even nicer than in david wongs other books

More down to earth than the "John dies at the end" series, because the characters act less stupidly. Thats whats made this story especially appealing for me.
A must read for every fan of crazy over the top Sci-Fi action!