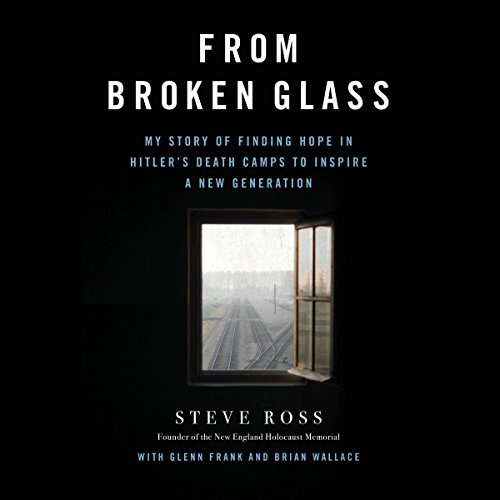 From the survivor of 10 Nazi concentration camps who went on to create the New England Holocaust Memorial, an inspiring memoir about finding strength in the face of despair.

On August 14, 2017, two days after a white-supremacist activist rammed his car into a group of anti-Fascist protestors, killing one and injuring 19, the New England Holocaust Memorial was vandalized for the second time in as many months. At the base of one of its fifty-four-foot glass towers lay a pile of shards. For Steve Ross, the image called to mind Kristallnacht, the Night of Broken Glass in which German authorities and civilians ransacked Jewish-owned buildings with sledgehammers.

Ross was eight years old when the Nazis invaded his Polish village, forcing his family to flee. He spent his next six years in a day-to-day struggle to survive the notorious camps in which he was imprisoned, Auschwitz-Birkenau and Dachau among them. When he was finally liberated, he no longer knew how old he was, he was literally starving to death, and everyone in his family save for his brother had been killed.

Ross learned in his darkest experiences - by observing and enduring inconceivable cruelty as well as by receiving compassion from caring fellow prisoners - the human capacity to rise above even the bleakest circumstances. He decided to devote himself to underprivileged youth, aiming to ensure that despite the obstacles in their lives they would never experience suffering like he had. Over the course of a nearly 40-year career as a psychologist working in the Boston city schools, that was exactly what he did. At the end of his career, he spearheaded the creation of the New England Holocaust Memorial, a site millions of people, including young students, visit every year.

Equal parts heartrending, brutal, and inspiring, From Broken Glass is the story of how one man survived the unimaginable and inspired a new generation to help forge a more compassionate world.

"From Broken Glass is an opportunity to spend time in the presence of an extraordinary man. No one I know of has ever responded to unimaginable brutality with such generosity of deed and spirit, recounted here with understated eloquence." (Congressman Barney Frank, New York Times best-selling author of Frank: A Life in Politics from the Great Society to Same-Sex Marriage)

"Steve Ross emerges as a resilient character who is determined not to allow the enemies of the past to re-emerge in the present unchallenged; his book opens with a cri de coeur on Charlottesville, and it ends with a defiant testimonial: 'I am a survivor.' A worthy memoir of dark times, full of practical lessons for resistance and community organizing today." (Kirkus Reviews)

"From Broken Glass is a captivating and deeply personal story of a young boy's experience in the Holocaust, and the ways that event shaped his life as an adult in America. Ross's remarkably detailed account stands as a testament to the resilience of the human spirit. It is relevant to this day, a reminder of what can happen when we lose sight of the humanity of others in society." (Senator Dianne Feinstein)

In this day of extreme polarization and the rise of Nazi sympathizers I suggest this book be required reading/listening in every high school in the US.

This book is difficult to read due to the content and the extent of what horrors Mr. Ross experienced. However, it is an excellent story about and amazingly resilient man who suffers terrible trauma and horrific experiences and then proceeds to use them to help others as an adult. As someone who worked in the mental health field with children I was in awe of all of the work that Mr. Ross has done for those in need. I have recommended this to several people.

Lest we forget. The ability of humans to perpetrate evil is astounding. The ability to overcome it, always greater still.

An inspiring story beautifully written and read. From Broken Glass is one of the best memiors of the Holocaust I've read.

Unbelievable story of how a man turns unbearable suffering to good

Words cant describe how Steve Ross was able to survive through such an evil tragedy. The fact he was able to make his life after the holocaust so meaningful for so many is remarkable. It was hard to put down.

I want to go to Boston now to visit the memorial. Thank you for sharing your story. It needs to be heard by every American--young and old especially in today's political and social environment.

A must have that we may never forget

I absolutely loved this book. not many have made me cry and this one did. I love the narrator with his accent I felt like I was transported back in time. the atrocities this man suffered at the hands of another and survived to thrive and have such a positive outlook and effect on others is nothing short of a miracle. thank you for writing this book I will listen to it many times over.

Should Be Required Reading for everyone!

Extremely well written and preformed book not written for sensation or out of anger but the tell us of what happened and what became of his life. Kids today have no idea about this and therefore can not understand the fear in so many older people today as we face the real possibility of history repeating itself. I truly feel this should be required reading the world over by everyone, young and old. Thank you for this enlightening book.

a must for all young and old

I try to formulate words to describe this book. I sit speechless, feeling grateful to have heard his story, saddend so many youth today are robbed of this history. Two words bellow within me after this incredible story...Thank you