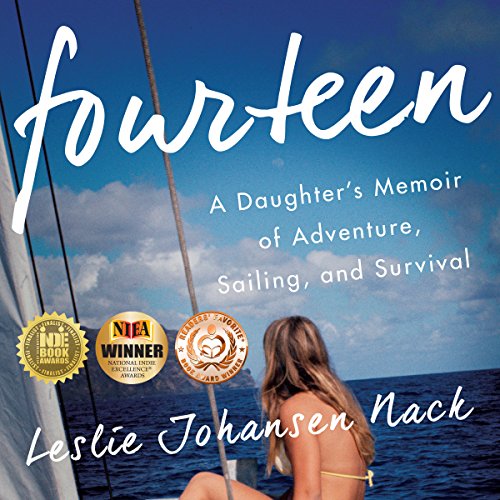 Obsessed with sailing, Leslie Nack's larger-than-life Norwegian father has a dream to live on a sailboat and show his three daughters the world. And although it takes years, in 1975 he finally completes his preparation and sets his sights on French Polynesia. But when they begin their journey, Leslie, who has just turned 14, faces a disturbing reality: her father, who's crossed boundaries in the past, is not to be trusted...and she's trapped with him on a 45-foot sailboat.

Intense and inspiring, Fourteen is a coming-of-age adventure story about a girl who – with the help of the ocean, which alternately serves as her solace and her savior - comes into her own power and finds the strength to fight back against abuse.

I loved listening to Leslie's story driving from and back to work. Her life story is intriguing and I can't wait to listen to the continuation.

Adventure and Heartache on the High Seas

If you could sum up Fourteen in three words, what would they be?

A sailing adventure about a young girl's struggles with her father...and the sea.

What was one of the most memorable moments of Fourteen?

Leslie is an excellent writer and many of her passages pulled me into the story. Here is one that really stood out for me: “The hatch closed, leaving me alone (at the helm) again. The world of stars and ocean took over my heart and soul. The comforting sound of the ocean sloshing against the hull filled my ears as the boat pushed forward.


Was this a book you wanted to listen to all in one sitting?

Yes, although I rarely have that luxury.

A remarkable story. What a strong and amazing young girl. I didn’t want it to end.

What’s it like to sail across the Pacific with someone you despise, love, and fear all at the same time? Coming of age story full of the wonderment and confusion of being a teen.

I enjoyed this book a bit more than I thought I would. It was deeper and not quite what i expected but I enjoyed it just the same. It made me angry hearing about the abuse and the authoritarian way her father treated them. That made me think about how I behave with my own children. I enjoyed the sailing bits and would recommend the book overall.

This beautifully written memoir of a young girl’s life changing adventure was so well read by the author. I felt as if I was with her and was often moved by the words she used to describe what she experienced and felt. I’m not a sailor but any sailor would probably love listening to this incredible story. I’m happy that the author is a new friend of mine.
Barbara

This book was very interesting. I learned a lot about sailing and the islands in the South Pacific.

One of the Best sea stories out there.

There are a number of top audios that I have in my library,
however, this one ranks among those listed at the top.
The story was well presented, and never a dull moment.
I would say that Leslie is one of the most interesting authors out there,
and this book will continue to be one of the best in my library.

A good read about an awful topic.

I read this straight through in a couple of days. It's an engrossing Tale from the perspective of a young girl dealing with enormous emotional and physical assault. While not the adventure story I was expecting I could not put this book down.

I had my doubts about this book but turned out to be a great story.