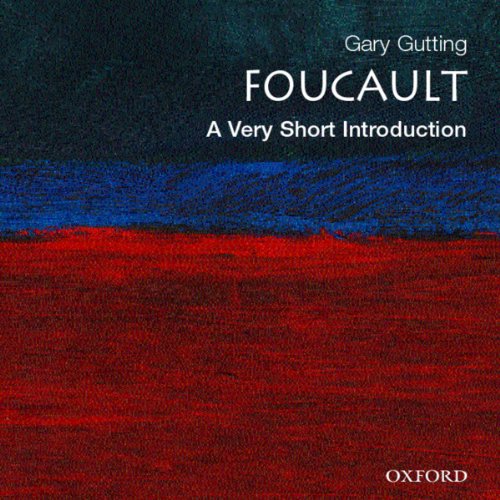 Buckle up, brace yourselves, and get ready for a wild philosophical ride with Gary Gutting’s Foucault, a concise yet comprehensive introduction to the notorious French intellectual whose theoretical writings on sexuality, self-identity, and the nature of knowledge itself, among other topics, have in recent years come to constitute a cornerstone of modern philosophical inquiry. This contribution to Oxford University Press’s Very Short Introduction series includes an overview of Foucault’s life, as well as significant summary and analysis of the author’s most seminal works.

Voice actor Phil Holland lends his even, authoritative tones to this engrossing guide, his clear enunciation and strong pacing guiding listeners through Foucault’s densest intellectual musings, making it easy to learn from and enjoy this engrossing audiobook.

Foucault is one of those rare philosophers who has become a cult figure. Born in 1926 in France, over the course of his life he dabbled in drugs, politics, and the Paris SM scene, all whilst striving to understand the deep concepts of identity, knowledge, and power. From aesthetics to the penal system; from madness and civilization to avant-garde literature, Foucault was happy to reject old models of thinking and replace them with versions that are still widely debated today. A major influence on Queer Theory and gender studies (he was openly gay and died of an AIDS-related illness in 1984), he also wrote on architecture, history, law, medicine, literature, politics and of course philosophy, and even managed a best-seller in France on a book dedicated to the history of systems of thought.

Because of the complexity of his arguments, people trying to come to terms with his work have desperately sought introductory material that makes his theories clear and accessible for the beginner. Ideally suited for the Very Short Introductions series, Gary Gutting presents a comprehensive but non-systematic treatment of some highlights of Foucault's life and thought. Beginning with a brief biography to set the social and political stage, he then tackles Foucault's thoughts on literature, in particular the avant-garde scene; his philosophical and historical work; his treatment of knowledge and power in modern society; and his thoughts on sexuality.

I understand that this is Foucault, and it was to be expected that it would be a little dry, but nobody can convince me that this wasn't read by Microsoft Sam.

This quite technical introduction to Foucault is thorough and engaging. Worked well as a refresher course, but requires considerable familiarity with modern and postmodern philosophy and thinking. I was pleasantly surprised with the depth and coverage of wide aspects of Foucault.

Detailed. Gave a good overview without repetition. I enjoyed the narrator's voice and felt that the introduction was a good point from which to embark on further reading.

A good way to know Foucault way of thinking

A good way to know what else to read from his work. The madness and punishment are the ones what I like the most.

If you could sum up Foucault: A Very Short Introduction in three words, what would they be?

What other book might you compare Foucault: A Very Short Introduction to and why?

this was my first audible, but the pronunciation of non english words was rather poor at least to me , I'm not a english native speaker

If you could give Foucault: A Very Short Introduction a new subtitle, what would it be?