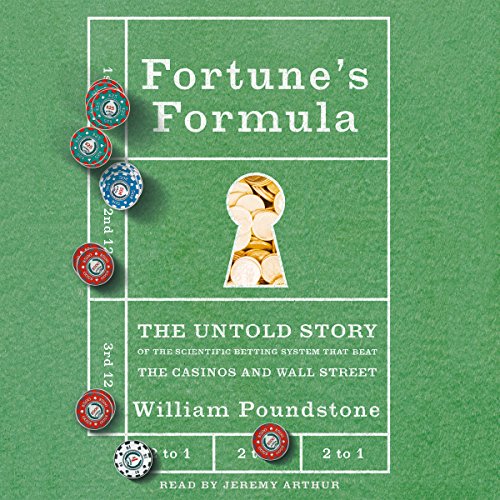 In 1956 two Bell Labs scientists discovered the scientific formula for getting rich. One was mathematician Claude Shannon, neurotic father of our digital age, whose genius is ranked with Einstein's. The other was John L. Kelly Jr., a Texas-born gun-toting physicist. Together they applied the science of information theory - the basis of computers and the Internet - to the problem of making as much money as possible as fast as possible.

Shannon and MIT mathematician Edward O. Thorp took the "Kelly formula" to Las Vegas. It worked. They realized that there was even more money to be made in the stock market. Thorp used the Kelly system with his phenomenally successful hedge fund, Princeton-Newport Partners. Shannon became a successful investor, too, topping even Warren Buffett's rate of return. Fortune's Formula traces how the Kelly formula sparked controversy even as it made fortunes at racetracks, casinos, and trading desks. It reveals the dark side of this alluring scheme, which is founded on exploiting an insider's edge.

Shannon believed it was possible for a smart investor to beat the market - and Fortune's Formula will convince you that he was right.

Could be MUCH shorter

Oddly the narrator repeatedly refers to the accompanying PDF which I could not find. I emailed support about this.

Nevertheless this was a fine book describing the Kelly formula for investment/betting decisions. This remarkably simple formula is powerful, widely applicable, and easy to understand. In fact, it is so easy to understand most of this book is unnecessary to understanding the formula. Much of the book is very mildly interesting stories about shady bookies and investment managers that have little, or nothing, to do with the Kelly Formula along with various other investment/betting strategies having nothing to do with the Kelly Formula.

I was not impressed with the presentation of the St. Petersburg Paradox. It is well described, but the underlying reason for the paradox seems to be completely missed. This is important because the book later discusses the differences between using the arithmetic verse geometric means. The important take away from the St. Petersburg Paradox is that any mean is worthless if the variance is too large. This variance problem is touched on elsewhere in the book, but it is not appropriately highlighted.

The narration is really excellent.

I enjoyed this book but it would have been better if much more focused on simply understanding the Kelly Formula.

The book was not enjoyable

The author does not immediately get to the point. He jumps from one topic to another. This was not an enjoyable read.

I really enjoyed this book. It references most of the important figures that occupy the Venmo diagram of quantitative finance, gambling, and statistics/probability theory. Really cool listen.

This is the moost important thing to learn when investing or gambling: learn how to never go bust!

A surprisingly varied and engaging story that connects wildly different ideas. A great story for any day

The Origin of Betting Strategy

Connecting betting theory to investing, a gripping read of how to use what is now called "analytics" to gambling, and ultimately to the stock market

The book has an amazing story to tell but waltzes around it for the first few chapters. It introduces great historical figures such as Shannon and Thorp early on to dazzle everyone about their adventures into gambling. Only a few hours into the book do you get introduced to Kelly's formula. Although Poundstone and Arthur do their best to illustrate the elegance of the formula, it would only serve better with the PDF at hand. It's quite hard for someone to grasp how fast 2 to the 11th power really accumulates first hand.

Overall, great story and good performance. A must read for anyone into money management.

A must read or in this case a must listen

Biography of finding the perfect investment. a brief history of bright people and the association of money putting it to work correctly.