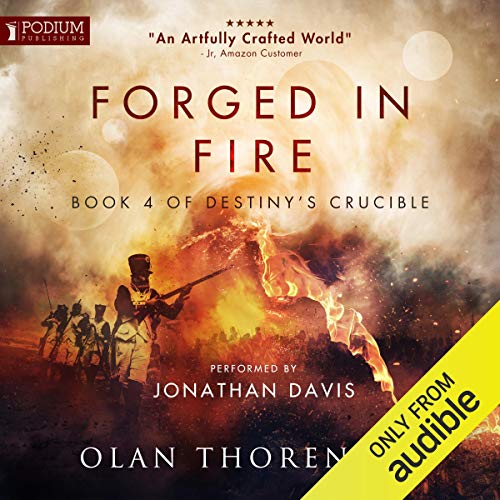 Joseph Colsco has survived what many would not have - cast naked on an alien planet amidst humans speaking an unknown language and with a different culture and history. Now, known to the people of Caedellium as Yozef Kolsko, he has risen out of despair to prominence and finds himself a central figure in the culmination of a struggle against an imperialist power bent on subjugation.

The clans of the Island of Caedellium must gird themselves for what is to come. If they can't unite to a degree previously unimaginable, they will fall into the bottomless abyss of lost history. Their strengths are their determination, bravery, potentially new allies, and a single man with a mysterious history. The options are simple: victory, death, enslavement.

Yozef Kolsko may have transformed from who he had been on Earth, but did the trials he has undergone produced a savior some of his adopted people see him as or is he an illusion? The crucible of fate is about to yield a final product, but is the result enough against a formidable enemy?

Probably the best series I have read/heard. A great story and a great narrator. There are a few unanswered questions but maybe there will be a book 5? I don't want to spoil anything but you'll see. This is one purchase you very likely won't regret. Be sure to purchase the books in order! That being said, if you're reading reviews for this book then you've likely read the first 3 and need no further information! Enjoy!

Book 4 just as great as the previous 3!

Wow. Just Wow. What a truly great series. A fantastic combination of author and performer, who together literally breathe life into the epic tale of Joseph Koltho. I can't say enough good things about this series. Ther are no flaws, no hiccups, it is simply one of the best series I have ever listened to. Most highly recommended, but listen to the SERIES in ORDER!
( I kindof hope there are more sequels, but if not, this is a fine ending! )

I'm totally immersed, ready for the next book.

What does Jonathan Davis bring to the story that you wouldn’t experience if you just read the book?

The narrator does a great job with voices and accents to help give the characters more depth and personality plus it's very helpful when following the story.

Hoping this isn't the end of this story...

This is a fantastic series and a great final? installment. The way this book ends has the feel that the author might be wrapping up the series, but there's so much potential for more.

Fingers crossed that the author is as enthusiastic to write more about Yoseph as I am to listen.

Please Sir, may I have some more?

I cringed when I saw this book was over 28 hours. Rarely does any story hold ones attention for that length. Not here. You know that Thorensen enjoyed this trip, and more, he enjoyed taking us along for the ride. What thoroughly enjoyable SciFi. Outrageous story line made believable, fast moving action, superb character development, light on the emotional slobbering, and easy on the intimacy (thank goodness). My favorite LOL line (paraphrased): Next time I am stranded on an alien planet, I shall come more prepared.

Can't forget to mention the Jonathan Davis narration was spot on - smooth, unhurried, a perfect fit. Thank you, really enjoyed this.

Makes you wonder why Audible continues to promote second rate works of more famous authors when there are gem series like this that I had to discover on my own.

I've been on audible for several years and read stacks of books. This series is by far in my top 3 favorite almost could be my favorite .The depth of the world building is so well thought out it's close to someone actually living this out . The narration is so well done I would compare it to being in a desert for 3 days with no water and then waking up to being in a crisp clean fresh water pool . My point being this narrator is what is needed to combine with authors story to 100% transport you to another place and make you feel that every character and moment In this book was nothing less than a real event that had happened . I guess what I'm trying to say is that I'm am blowing away by the author and narrator. And I would like to say I bought this book and all 3 previous books to this series it was not given to me it was just so good I had to write something about it . Only other thing I could possible say is that I wish I had no job or nothing else to do so I could have listen to this book start to finish . Instead it took me 3 days to go threw 28 hours

I just couldn't finish it

This series started well, or at least well enough for me to be interested, but became increasingly lame increasingly quickly. I only kept reading/listening because I wanted to find out what was up with the aliens who brought humans to this new world. Alas the story has officially become too turgid, repetitive, and unbelievable (from a character development standpoint) for me to listen/read further. I also increasingly suspect that the alien question will not be answered and was just a poorly used and then mostly abandoned plot device. Save your money/credits and read a plot synopsis instead.

Does this book have an editor?

The story of this book is interesting, however the endless repetitions of the description of every single event makes listening to it very unpleasant.

For example, a long speech given in one chapter is quoted word by word in the next chapter.
If this was a printed book, I would have just skipped ahead.
Evey action is described multiple times at the planning, execution and after the action, and again in full detail when someone mentions it later.

The entire series can be trimmed down to a single great book.

Had a bunch of fun listening to this. The narrator is top rate with his voices and consistency.
I appreciated the character introspection, the pacing of the story and the authors attention to details. Thanks!

I Laughed, I Cried, I Hung on Every Word

If you could sum up Forged in Fire in three words, what would they be?

The amount of detail, the rich characters, the suspense.

What does Jonathan Davis bring to the story that you wouldn’t experience if you just read the book?

You can feel the personality of the characters come through in his performance.

There were many, I cried at times and other times I was laughing out loud.

This series is amazing, fast moving, you never get bored. There are twists that you never see coming. Wars, inventions, spying, clever dialogue, and sex. What more could you want?