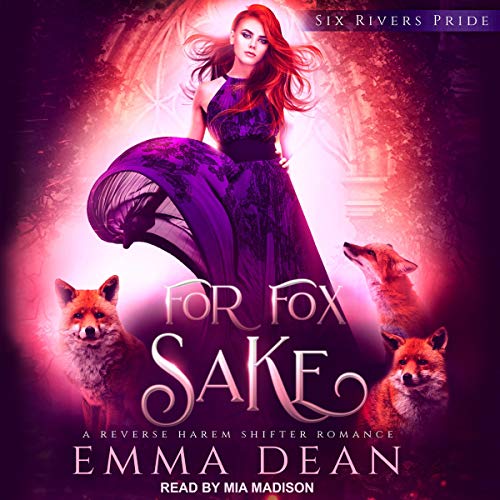 What should you do when you're outfoxed?

Kenzie is the only non-witch in her family. When her younger sister's powers end up stripped from her, Kenzie promises to find a way to get them back - after all she has a very specific set of skills after trying to make up for not having any powers of her own.

When Kenzie finds something to restore her sister's powers, the only way to obtain it is to steal it from the Alpha of the West Coast Pride. Right as she's about to succeed three sexy foxes snatch it right from under her nose. Will Kenzie be able to take it from them before they steal her heart as well? Contains mature themes.

Highly recommend this book to lovers of RH, great heroines, confusing-but-sexy shifters, and paranormal action! The characters are pretty great and I found them to be quite unique, which can be hard to find in the RH genre times. The narrator did a great job which is a big deal to me and effects the story big time. The book cover really piqued my interest but I wasn't sure how'd I feel about the fox shifters. SO glad I took a chance and listened!

So I was pleasantly surprised that enjoyed this book. Usually what bothers me about a book is either the heroine or the hero of the book. I was so happy when listening to this book that I really enjoyed the lead females personality! As well as the main male leads 😆 also the side characters where awesome and I’m very interested in them! This story has romance (yay) and action (double yay) and I recommend purchasing this book!

This book surprised me. I did not think for one second that it would be very good. But it was done well and I enjoyed the characters a lot! Good job narrating as well.

There isn't anything here

I hoped for a book that would at best sexy and at worst funny. This had neither.

This is the first ever fox shifter story I’ve seen and I will say I’m not disappointed. I freaking love the three foxes but I LOVE Kenzie more she’s so badass. She doesn’t just sit back and cry she actually stands up for herself and she’s smart as hell and can fight like a badass!!

The story would be perfectly enjoyable if the narrator would change her voice for different characters. Every character sounds almost exactly the same, so it all kind of runs together. I don't think I'll continue with the audio format for that reason, but I will probably buy the kindle version.

A non witch and three shifter

A really good story. A Maincharakter with No witch power still making her way in a world of Magic. I Loved the Moment of the contract and I am looking forward to the next book.