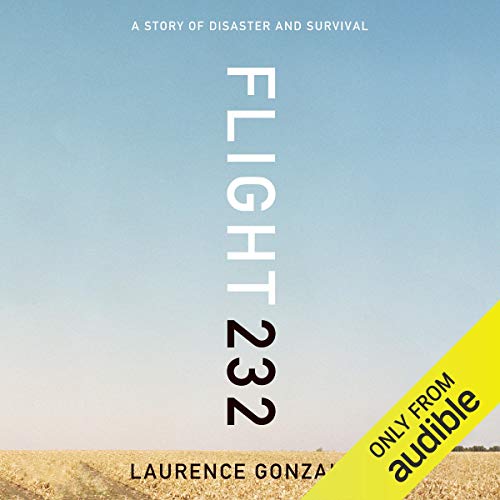 Twenty-five years after the catastrophe, a dramatic and extraordinarily rare 360-degree view of the crash of a fully loaded jumbo jet.

As hundreds of rescue workers waited on the ground, United Airlines Flight 232 wallowed drunkenly over the bluffs northwest of Sioux City. The plane slammed onto the runway and burst into a vast fireball. The rescuers didn't move at first: nobody could possibly survive that crash. And then people began emerging from the summer corn that lined the runways. Miraculously, 184 of 296 passengers lived. No one has ever attempted the complete reconstruction of a crash of this magnitude. Drawing on interviews with hundreds of survivors, crew, and airport and rescue personnel, Laurence Gonzales, a commercial pilot himself, captures, minute-by-minute, the harrowing journey of pilots flying a plane with no controls and flight attendants keeping their calm in the face of certain death. He plumbs the hearts and minds of passengers as they pray, bargain with God, plot their strategies for survival, and sacrifice themselves to save others.

Ultimately he takes us, step-by-step, through the gripping scientific detective work in super-secret labs to dive into the heart of a flaw smaller than a grain of rice that shows what brought the aircraft down. An unforgettable drama of the triumph of heroism over tragedy and human ingenuity over technological breakdown, Flight 232 is a masterpiece in the tradition of the greatest aviation stories ever told.

I've had my feelings about Flight 232 tucked away for almost 26 years and this read was very therapeutic for me. I am a Flight Attendant for United and in 1989 I was based in Denver flying reserve. I had worked flight 232 100’s of times prior and worked it one week after the crash... because I was the most junior one on the crew I got the honor of sitting in the jumpseat that was occupied by Rene LeBeau, the only member of the crew to perish that awful day. I then went out on maternity leave right after that and never really “dealt” with all my feelings about this crash. Although I was suffering a form of PTSD I’m sure it was nothing compared to the individuals that experienced and lived through the event itself and hearing the survivor’s stories helped me put my experience into a manageable perspective. I think the author did a fantastic job of retelling the events without sensationalism and with the utmost respect for ALL the sufferers of this horrible accident, including the people on the ground involved prior to the crash and those involved in rescue efforts and post accident “clean-up”. I found that the author repeated some of the survivors stories but I understood he did this to show events that were happening simultaneously, thus giving the reader a better understanding of the timeline of events. I’m still emotionally moved but I can now view the horrendous video of the crash itself without crying. Thank you Laurence Gonzales for writing this book.

I have absolutely no idea as to how Laurence Gonzales has achieved it but he has researched and then relates the most heart rendering and agonizing report of a true event and tell us, the reader every single painful detail in such a way that still maintains this event's humanity.

How did he do this? I will never know. Not only do we learn about the event itself but we get some background and a few decades of follow up.

We are not left 'wanting'. Victor Bevine's performance is nothing short of five stars, as usual.

A wonderful gift from a fine author and narrator for us who are wise of us to receive it. I also suspect that it is a mission completed by Mr. Gonzales to tell the story for those poor souls on that fateful night twenty five years ago.

If you could sum up Flight 232 in three words, what would they be?

What other book might you compare Flight 232 to and why?

hummmmmmm...really don't have a specific in mind at this time.

Have you listened to any of Victor Bevine’s other performances before? How does this one compare?

great "disaster" book.....a second here...a misstep there....and the results to many people could have been changed.

The book is great and the story is more than compelling. No arguments there. But the narrator's insistence on ridiculous and inaccurate vocal affectations is irritating. Capt. Al Haynes is voiced as if he were a mob boss ordering a hit. ATC controller Kevin Bachman, who actually spoke clearly and without accent, sounds like Boss Hogg here. The ATC/CVR tapes are readily available; how long would this have taken to look up and listen to? Why would a narrator invent a character's voice without having heard it? Wouldn't common sense tell you to voice the character normally in the absence of any knowledge of the real person's accent and voice characteristics? It's a shame because the book itself is excellent. Skip the audiobook and read it. Make up silly accents in your head if you wish, but you won't have some narrator forcing that upon you.

What You Don't Know About Your Flight

Very interesting story that touches the human aspect along with the technical and mechanical aspects. As the story evolves with the stories of the people involved in the crash the reader gets to know the people and find the threads connecting these people to each other. The trauma of the event is still evident after all these years. The people who survived are heros. The pilots are heros. The people who investigated the crash and figured out where and when the parts of this airplane were made and found out what caused the crash are heros. This book however frightful and disturbing is a story of courage and survival. A truly painful and gainful read. Or listen. Narration was perfect.

This book was extremely well written. I felt like I was there and even learned some aviation engineering too!

For the technically minded thrill seeker

there is a lot of technical jargon which I ate up. the thrill-seeking part is guaranteed, but be forewarned the forensics are detailed

Would you try another book from Laurence Gonzales and/or Victor Bevine?

What was most disappointing about Laurence Gonzales’s story?

The first half was pretty good, but the entire second half was an incredibly boring recantation of engine part numbers. After an hour, I had the part numbers memorized. Memorizing numbers is not why I read books.

Nice voice - easy to listen to - it's the material that made him monotonous.

There were parts that made one feel great empathy for the passengers of the airliner, but aside from that, this book is BORING. It "sparked" boredom, not that that's the right term.

Asking for my credit back, and unable to figure out how this book got the good reviews it has. I suspect that those who liked it are also a bit nutty about numbers, recited in the text to the point of nausea.

Comprehensive easy, informative explanation of why 232 crashed and description of subsequent investigation.

Author does an excellent job of describing with empathy survivors’ burdens in trying to cope with PTSD.

He also explains in detail, in understandable terms the process by which investigators determined the causes of the crash.

The narrator did an excellent job keeping the readers involved. I would love more titles by him.