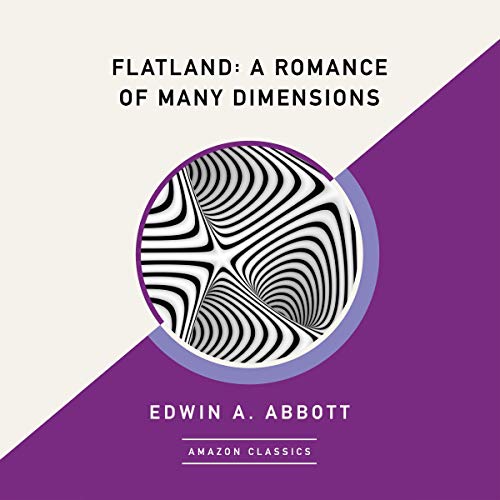 Flatland: A Romance of Many Dimensions (AmazonClassics Edition)

Flatland is populated by Squares, Triangles, Circles, and Lines, all of which are strictly divided by class and gender. However, our narrator, A Square, living a practical life in this two-dimensional universe, dreams of other worlds. Perhaps A Sphere, a figure from a three-dimensional realm, can help drive home the point. But, as A Square soon discovers, educating Flatland about the shapes of things to come proves to be a dangerous infraction.

Published in 1884, Abbott's intricately imaginative novella, which became a classic in the era of Einstein, was a skewering of social hierarchy that inspired Carl Sagan, Stephen Hawking, and anyone who dared to think - literally - outside the box.

AmazonClassics brings you timeless works from the masters of storytelling. Ideal for anyone who wants to listen to a great work for the first time or rediscover an old favorite, these new editions open the door to literature's most unforgettable characters and beloved worlds.

Somewhat difficult to understand, but interesting

This book primarily describes a society (Flatland) where people are geometric shapes. It explains their culture and the last part describes what happens when a citizen is exposed to other lands with different societal norms and understandings about shapes and the true nature of their society. I found the constant descriptions of geometry hard to visualize at times, but it was interesting and a bit weird - which I like.

Basic geometry and such tells tale of oppression and alternative facets. Beautiful in many ways.

I’ve attempted several audiobooks of Flatland as so far this is my favorite. It doesn’t contain the forward or second edition edits, but it is otherwise perfect.

A classic story presented with one minor annoyance

Flatland is a fun little story with a lot of clever worldbuilding by Edwin Abbott for his geometric creations to inhabit. The narrator does a good job, hamming things up a little where the story calls for it without overdoing it. Much of the later part of the story after the descriptive portion is a dialog between the main character, a square, and the beings he encounters. In these later sections came the part that annoyed me. The narrator reads exactly the form in the book, including the words "I:", "Sphere:", "I:", "Sphere:", "I:" over and over and over as the two banter back and forth. This rapidly gets tiresome and distracting, and is unnecessary in an audiobook where a simple alteration in pitch or accent is sufficient.

Extraordinary mind-opening book. Read from a fantastic narrator really nicely and heard easily and fluently from anyone.