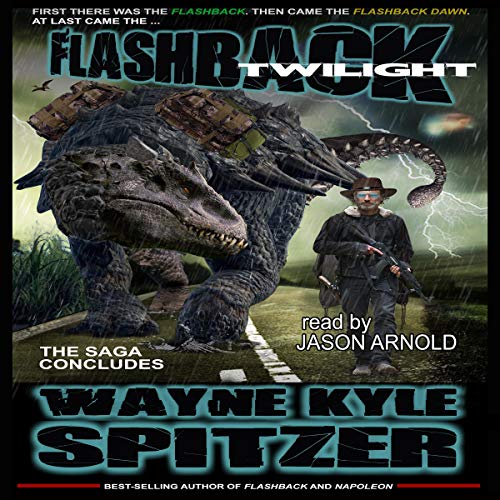 The epic final chapter of the Flashback Saga...in which characters from all the previous audiobooks and stories must come together to make their final stand.

“You don’t remember...do you?” His brown eyes suddenly twinkled, and he shook his head. “No? You don’t remember calling on me in the depths of those first awful nights, when you were at your most exposed, when you were at your most vulnerable?” He stroked her long, brown hair with an almost impossible gentleness; it was as though a cool-warm breeze rifled it rather than his fingers. “When it was just you and the boy...alone, scared. Cold. Hungry?"

She began to shake her head almost violently, her breathing and heart rate accelerating once again.

“Oh, yes,” he said, squinting, smiling. “You did. All the world did. It’s nothing to be ashamed of. You called on many during that time, in those hours and days and weeks after the Flashback - you wouldn’t have been aware of it. And you cursed the One who had brought it upon you...who had taken your husband and your daughter; who had taken so many husbands and daughters. It’s okay. We - we don’t judge. Not like them.” He looked at the hazy sky and the alien-colored lights, at the sun itself, which was a white disk in the smoke. “Not like Him.”

Good read, not what im used to

Good read, not my usual type, but you willl like the story and story line. the reader does a really good job on this.

This is a great story. Such a strange and unique take on this future world. It kept me listening just to see what and who happens next. Narrator did such a great job with bringing this world to life. This audio was given to me free and I voluntarily gave this review.