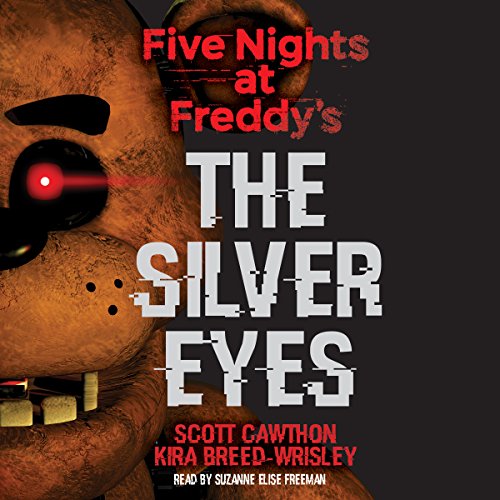 Based on the best-selling horror video game series, Five Nights at Freddy's.

It's been exactly 10 years since the murders at Freddy Fazbear's Pizza, and Charlotte (Charlie for short) has spent those 10 years trying to forget. Her father was the owner of Freddy Fazbear's Pizza and the creator of its four adult-sized animatronic animals, and now Charlie is returning to her hometown to reunite with her childhood friends on the anniversary of the tragedy that ripped their town apart.

Curiosity leads Charlie and her friends back to the old pizza place, and they find it hidden and sealed, but still standing. They discover a way inside, but things are not as they once were: the four mascots that delighted and entertained them as children have changed. The animatronic animals have a dark secret, and a murderous agenda.

My Son Loved it!

This book had a great vibe and was enjoyable! My Son had a great time listening to it. My son is a fan of the game and really enjoyed the lore.

I honestly loved this book. Suzanne Freeman does an amazing job voicing the characters. aswell as telling the story. Scott and Kira did a very good job with the story, but it did leave me with wanting more. My favorite character is CHarly, Mainly because the story resolved around her. She is the main character.. My least favorite was Lamar.. I felt he was undeveloped really. If there is a second book, I will be grabbing it. The Story, I will admit, wasn't scary at all. But being a fan of the games, I knew what was happening around every corner. Overall. It's a good book, and a great listen. Suzanne brought character to these characters.

The writing was well done, enough even to stand on its own... but the voice acting was very well done. I was reluctant because horror books can be made silly very easily by the wrong tone. Suzanne definitely delivered the suspense very, very well. Story was lacking a proper ending for me but still, overall a steady 5.

The novelization of the FNAF game series proves to produce a solid story in novel form. The games themselves are largely very simple, in gameplay, but it's the subtle details and atmosphere that draw so many in for speculation and anticipation. The novel manages to capitalize on these traits quite well, spinning an excellent tale woven from elements familiar, but much more involved, than those gleamed from the games.

As such, I absolutely recommend it to those who are hungry for more story from this setting, though it may confound speculation on the game story, as I hear it's considered a parallel or alternative interpretation. Just the same, what is revealed is very compelling and absolutely stands on it's own. In fact, the way it's written, I could easily see this adapting extremely well to film - if they are basing the movie on it - in the hands of a capable director. ... And it says Book 1? Oh spud.

Best book based on a indie video game and scary as all hell. Wish it would be a movie soon.

So Spooky but Amazing! Fantastic for Halloween!👻

Man this story scared me cant wait to get started on book 2! Super spine chilling story.

I didn't think it would draw you in so easily and describe itself so well for me to imagine. I really liked the story and character diversity, but what made it only 4-Stars Overall is that it repeatef actions and sentences to often, like John putting his hand on Charlies Shoulder, etc. So it often felt annoying and overused, but it's a small thing to overlook and doesn't disturb the overall book.