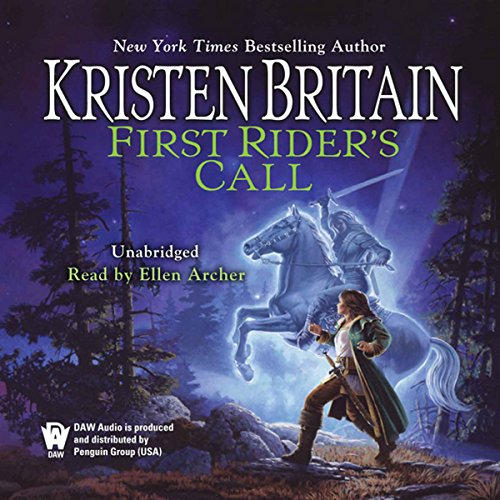 Second in the Green Rider series from the New York Times best-selling author of The High King's Tomb.

Once a simple student, Karigan G'ladheon finds herself in a world of deadly danger and complex magic, compelled by forces she cannot understand, when she becomes a Green Rider: one of the magical messengers of the king. Forced to accept a fate she never would have chosen, she attempts to return to her life as the daughter of a wealthy merchant, but the magic in her blood is too strong. Pursued by the ghost of the legendary First Rider, she rejoins the Green Riders to confront an ancient evil.

Am LOVING this series!!!

sooo happy to find another series of books to enjoy. wonderfully written, and narrated. everything you want, mystery, intrigue, suspense, and a great storyline... just right up my alley.

These book are great.

Would you listen to First Rider's Call again? Why?

I read these books and enjoyed the story and can't wait for each addition. When I heard that they were doing an audio book I was a bit Leary. Some are done horribly, but Ellen Archer did a tremendous job. I have enjoyed listening to her and can't wait for the next.

What made the experience of listening to First Rider's Call the most enjoyable?

I'm not big on fantasy novels but this was a free one, so I thought why not have nothing to lose, Man! it grabs you from the first page and doesn't stop. The narrator is fantastic I have recommend this to my grandson (14) got him hooked too.

What was one of the most memorable moments of First Rider's Call?

the Berry sisters, who would know they are very important

Which character – as performed by Ellen Archer – was your favorite?

All of the characters she is great added to my favorite

Read or listen to all of this series you won't be disappointed!

Book 2 in the series and still going strong. This is a great listen. More history of the characters is revealed and there are some surprising turns. You will not be disappointed.

Fantastic book and amazing narrative done by Ellen Archer. I recommend this series to all my friends because it is one of my favorites. It is a great sequel to Green Rider!

I loved it! along with green rider, proved to be a great beginning to this epic fantasy series. can't wait for the next book. Ellen did a great job in the way she narrated the series so far. She made the characters come to life. and she also made the overall story clear.

Great narration, characters easily heard thru tone and variations. Good story though at times it feels like a young adult story due to the main character acting/thinking so childishly. This may be intentional and works in the story but personally drives me a bit crazy at times

Start listening in the 40s

This book was extremely good and I really loved it once he got halfway through the book the first half of this book is just painful to listen to it's so boring. But once it hits halfway it goes back to being the book series I love.

Still enjoy the story. Started it years ago and got my daughter hooked on it too

Excellent narration. Good story, with some flaws. Told in 3rd person, this story begins with a delegation en route to the elves in Eletia, stopping for the night near an ancient cairn in the Northern Border Lands.

I enjoyed the time travel scenes with legendary Lil (the first rider). This book dded a lot of interesting backstory — and thankfully, each entry in the journal was engrossing yet short. I liked seeing the Green Riders embrace some rituals of the past.

As the book progressed, I felt worried for the characters standing directly in the path of Mornhavon. His sentience has awakened. Evil is rising and the restraining wall grows ever weaker. Meanwhile, wild magic is on the loose, messing with the power of the Green Rider brooches.

At times, I disliked the heroine, Karigan. She can be immature, self-oriented, and petulant. I also grew tired of seeing everyone else stand around like lost sheep while K saves the day. That scene with the angry crowd of petitioners waiting to speak to the king...nobody else could handle that? Seriously? I'd like to see the glory shared among the central secondary characters, and a greater sense of esprit de corps.

A fairly engrossing fantasy series so far, but the books are becoming progressively longer. I prefer succinct writing. I like books of 350-550 pages, to avoid repetition and wordiness.