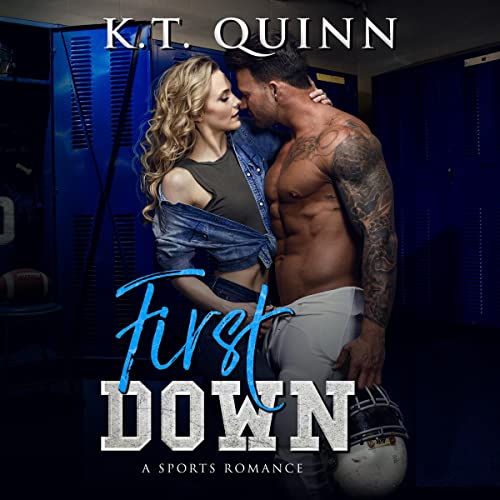 I never had a thing for football players.

That is, until I met Dallas Lockett.

He’s the star player for the Salt Lake City Stallions.

A rich and famous playboy who could have anyone he wants.

Yet for some reason, he wants me.

Dallas has a strict no-girlfriend policy during the season.

A policy which he - and his teammates - make very clear to me.

But based on the way he looks at me in the locker room, that policy is being stretched to its limit.

It’s my job to touch every part of his body.

Helping him stretch before practice, and giving him deep-tissue massages after.

It’s like staring at a perfectly-cooked steak that I’m not allowed to eat.

Dallas gets hot and sweaty during his games, and soon we’re getting physical off the field.

Can I do my job to keep him healthy on the way to the playoffs?

Or will we both fall a yard short of the goal line?

First Down is a scorching sports romance filled with humor, suspense, and football-related excitement. Happily ever after guaranteed!

K.T. Quinn Scores With First Down

I've never read K.T. Quinn before. I really enjoyed this book. It was funny, not a ton of angst, a touch forbidden, and steamy at times. I loved the distinction between Dallas the star quarterback and Dallas the person. The sparks between Kimberly and Dallas flew from the start. I loved how they each pushed the other to be their best and to never settle. I also loved the other players on the team. I'll definitely be checking out more of K.T. Quinn and this series.

I received this audiobook for free from Audiobooks Unleashed. This is my honest and voluntary review.

The key protagonists come from different backgrounds but are thrown together by serendipity. They wrestle their way through a gauntlet of bad characters, unfair rules, and their own internal struggles. How far will they go to keep their relationship viable, and will they prevail? No spoilers here...

4.5 stars - I ❤ this book! Even when things head for the dramatic, there's humor throughout. I found myself frequently chuckling.

Dallas is surly and a bit full of himself, at times. Kim, not Kimmie, is fresh out of college but she knows something that can help Dallas. I love the dynamics and how they could've been power dynamics but, aside from a couple of "small" events, they didn't go to that level.

In true Cassie Cole / K.T. Quinn fashion, life interrupts in everyday ways. I like that there are real life bumps that they have to deal with. And I love how they sort them out - via brute force and other creative ways.

Curt Bonnem and Ramona Radcliff did a good job narrating. This is a fun read / listen and I'm looking forward to future books in this series.