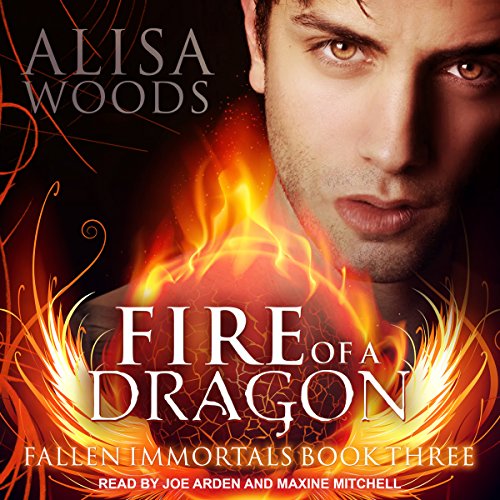 Fire of a Dragon

Lucian is a Dragon Prince of the House of Smoke...and he's dying. He has to spawn a dragonling to uphold the treaty that keeps the mortal world safe from the immortal Dark Fae, but a dragon's mate rarely survives the birth of a young dragon, and he can't face the horror of another woman's death on his hands. When he rescues a beautiful woman from a demon roaming the streets of Seattle, he has to seduce her without losing his heart...and before he turns into a feral dragon and breaks the treaty forever.

I'm glad the saga continues so we could see all brothers endings. This story of the eldest brother kept my attention from beginning to end, I only wish they made the story into one book. Having to pay for three at roughly 6 hours long not well worth the price.

This is the final part of Lucien's and Ari's story and what a ride it has been. I have been totalled engrossed in the story from book one through to this one which is the third book.

I absolutely love the way Alisa writes, the descriptions and the action in the story are gripping and as for the chemistry and the sex between Lucien and Ari it is off the charts. I thought that this book would bring an ending, and in a way it did just not the ending I was expecting. Alisa has given us a really good story but the ending leaves you wanting more. I for one can't wait to see how the overall story of saving mankind and fulfilling the treaty.

As for Lucien, Ari and their dragonling the journey was a fantastic rollercoaster ride which I know I will listen to again and again over the years.

This has to be the weakest dragon clan in history. The h has been kidnapped 3 times. The H spends most of his time afraid of what will happen with the fae (who need killing), the vampires, other dragons, the humans, demons & angels. The H & h both whined through 3 books about her ex, his deceased wife & son, her best friend, their love, the treaty & anything else they can find to whine about. Finally the baby's born after a lot of unnecessary drama & (the change of pronunciation of one characters name), we get to the big finish. NOPE. A twist in all we've been told from the beginning delays the HEA & we will now have to suffer through more books if we want to get to the HEA.

The adventure has just begun

Arabella's adventure to becoming a mother is trying but she is strong. To fulfill the treaty the adventure has just begun. What an exciting and suspenseful series that I can't wait to read more. Alisa weaves an exciting world that dragons are the protectors of the humans and must find true love to save the world. The narrators of this book are awesome, love the inflection of tone that bring the characters to life.

What a Great Series I am hooked. I Love the Story it has Drama, Suspense and Love!!! True Love!!!

Another exciting, and enjoyable story in this series. There was never a dull moment. I enjoyed it.