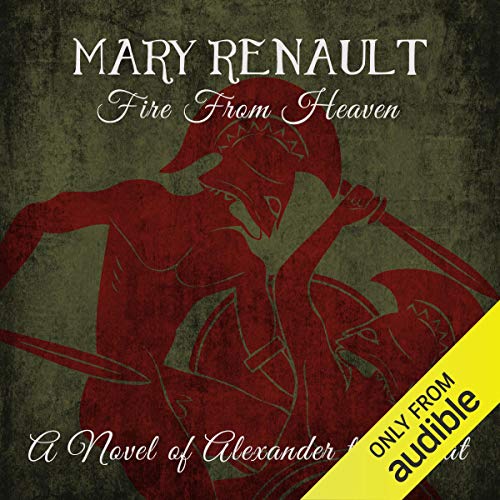 Alexander's beauty, strength and defiance were apparent from birth, but his boyhood honed those gifts into the makings of a king. His mother, Olympias, and his father, King Philip of Macedon, fought each other for their son's loyalty, teaching Alexander politics and vengeance from the cradle.

His love for the youth Hephaistion taught him trust, while Aristotle's tutoring provoked his mind and Homer's Iliad fuelled his aspirations. Killing his first man in battle at the age of twelve, he became regent at sixteen and commander of Macedon's cavalry at eighteen, so that by the time his father was murdered, Alexander's skills had grown to match his fiery ambition.

"Renault's skill is in immersing us in their world, drawing us into its strangeness, its violence and beauty.... a literary conjuring trick.... so convincing and passionately conjured." (The Times)

In Fire from Heaven the author, Mary Renault, traces the life of Alexander the Great from childhood, age 4, to early adulthood and stops with the assassination of his father Philip II of Macedon in 336 BC. The novelists contrasts the natural virtues of Alexander against a backdrop of the conspiracies of Macedonian royal court and the flaws of both parents, and the historical facts of Philip’s II achievement of uniting the Greek city states in preparation of war against the Persian Empire. The characters are filled with understandable human feelings and passions mixed with the myths and belief systems of ancient Greece as well as the learning and philosophy of the time. All this is done in an entertaining fashion with the plots and pitfalls Alexander must navigate to reach adulthood. The sensuality of the characters is understated by current standards but clear in its intent to allow ones imagination to fill in the blanks. The speaker of the audio, Roger May, does an excellent job creating different voices for the various characters including an Athenian conspirator with a lisp. He is equally believable whether speaking as a youth or an old man. This book has not lost the appeal it had when I first read it 40 years ago. To be able to listen to it now, with Mr. May’s vocal flourishes, is a renewed pleasure.

Loved the story & character development; excellent period piece. However, abrupt transition between scenes makes for confusing casual listening. Didn't read the books though, so may be a criticism on narration spacing. Nonetheless, will buy part 2 & 3 audiobooks :)

In Mary Renault’s Fire from Heaven (1969), King Philip and Queen Olympias of Macedon have the mother of all toxic marriages, permanently scarring their young son Alexander with their scorched earth warfare: “a pain he had been born with.” While at first one’s sympathy is with Olympias, Philip appearing drunken, brutish, and ugly and flinging four-year-old Alexander out of her bedroom and down the stairs, in time one begins sympathizing with the King, who seems to act with ironic restraint in the face of his wife’s hatred and curses (invoking the gods) and witchcraft (piercing the penis of a doll figure of the king with a needle), not to mention her provocative exaggerations, treasonous intrigues, and emotional blackmailing of her son when Alexander tries to be independent. True, Philip marries a series of teenage girls and has affairs with his young male squires (“minions”), but one suspects that had Olympias been more loving, Philip might have been more faithful.

Another compelling thread through the novel is the relationship between Alexander and Hephaistion--“Alexander’s shadow.” Although the novel demonstrates a general acceptance of homosexuality or bisexuality, Alexander is mostly beyond things like sex and mainly just wants to unburden himself to Hephaistion as they sleep together, while Hephaistion tries to convince himself that he’s blessed by the gods to be so close to Alexander and to refrain from wanting more than pillow talk. Renault depicts their love and friendship as natural and deep:

The story begins with four-year-old Alexander waking up with a snake wound round his waist and sneaking into his mother’s bedroom to return it, he thinks, to the Queen. Renault proceeds to depict landmark events from the future conqueror’s youth that reveal his personality, historical context, and destiny, including having his growth stunted by an overly zealous pedagogue admirer of Spartan severity, learning about Achilles and Patroclus, meeting Hephaistion for the first time, making Ptolemy his blood brother, killing his first man in his first violent action (at age twelve), meeting Demosthenes, winning and naming his beloved horse Bucephalus, receiving an education from Aristotle, successfully leading an army in battle for the first time, becoming regent at sixteen and cavalry general at eighteen, protecting his father during a mutiny, and so on. Renault renders such things suspenseful and compelling.

Interestingly, the book stops before Alexander is king of Macedon, before he’s set foot in Asia, and before he’s known as Alexander the Great--although at sixteen he does defeat a Thracian tribe, displace them from their land, and found a city in his name there, earning the nickname Basilicus, or Little King. The novel, then, is about Alexander’s youthful potential. It does not even relate what happens in the aftermath of Philip’s death, ending, in a way, with a shocking cliffhanger. And the second novel in the Alexander trilogy, The Persian Boy (1972), will begin several years later with the point of view of the orphaned, enslaved, and castrated son of a Persian noble in the middle of the Persian Empire, while the third, Funeral Games (1981), begins with Alexander’s death. Mary Renault is impressive in her refusal to pander to readers.

Another impressive feature of Fire from Heaven is the psychological complexity of her central characters, Alexander, Philip, and Hephaistion. Especially interesting is Alexander’s relationship with Philip: “Each eyed the other with curiosity, resentment, suspicion, regret, and a half-hope which each hid too well.” Philip loves Alexander and is proud of him but can’t help but see Olympias in the boy’s features and mannerisms, while Alexander is often too quick to believe his mother’s worst interpretations of Philip’s actions, even when it means ignoring his beloved Hephaistion’s more balanced ones. The King is at times reduced to wondering, “What did I do to deserve this?” Alexander is superb in Renault’s hands: beautiful, brave, loyal, loving, poised, reckless, clever, curious, unpretentious, charismatic, and destined for glory and fated to die early: “Shining and calm at the center of his mystery, the godlike freedom of killing fear.”

Renault narrates by switching from among multiple points of views in third person, doing things like telling us what Alexander was up to on an early campaign by showing Philip reading a letter from the boy telling him what he accomplished (instead of showing Alexander accomplishing it in real time), and efficiently making events lead up to Philip’s death, the tragic core and climax of the novel. En route, she works in plenty of matter from Greek myths and The Iliad, Greek, Macedonian, and Persian history, and cultural contrasts, like Greek-Macedonian, Thebes-Athens, Attic-Sparta, Greek-Persia, etc.

The novel is vivid, believable, transporting, moving, exotic, lean, fierce. It does what the best historical fiction does, transporting us to another time and place with details and imagination while making the characters relatable, as in the following lines:

“In the midst of it, dwarfing shrines and altars like toys, a vast oak lifted its bare black labyrinth above the snow.”

“She gave him with dropped lashes a little smile, fragile, mysterious like a hamadryad slipping out briefly from her tree.”

“The smell of its sweat and breath and leather bathed him in its steam.”

“He walked over, put out his hand, and touched Hephaistion as a man might touch a sacred object for luck or a good omen, while deeply concerned with something else.”

Brian May reads the novel professionally and engagingly.

Good story and performance, however the tempo runs through the ends of one chapter to the next. This makes it confusing when characters and senses change.

Gets very good after the early portion. The story really comes to life. Definitely recommend to fans of genre

Scattered even for a life long Audbile reader

very little. Hard to track the story. Author tried to hard and forces too much onto the text while neglecting vital parts of which character is speaking or running the beat. If this had come through my class room, I would have giving it a C- at best. Should not have been published in this form, but it did just because of the lack of fiction dealing with Alexander. A shame really that this is the best we can get.

Unorthodox pronunciations compared to other readers. Unclear who was speaking and very very hard to follow. I am extremely good at following but this was a real challenge.

Could you see Fire From Heaven being made into a movie or a TV series? Who should the stars be?

No with this script

Does not read well. Hard to know who is saying what or which character has taken the narrative. Sadly poorly written and poorly performed. I think I will likely return it.

This first of the Renault trilogy about Alexander the Great is an engrossing tale of the young man's life up to his father's death. Roger May reads it very well. But the story is told from many different perspectives and darts from that of one character to another without Renault necessarily attaching the names of the focus character. This is OK if reading the text, because there is a space left before the narrative begins again from the next perspective. This space signals the focal shift to the reader.

Such spacing is not uncommon in novels. Audiobooks usually represent that with a pause of a second or two, so that the listener gets a signal similar to what would be understood when reading text. This audiobook does not pause; Roger May's narration is launched into the new section without any discernable signal that this new paragraph might have a different focus than the preceding ones. This left me often confused, particularly in the last third of the book, when the shifts seem more frequent and new characters' perspectives are being introduced. I had to revert to the print book I had more often than I would have liked. So I cannot give Audible the 5 stars that I give Renault and May.

family drama, palace intrigues, battles, and the irresistible unstoppable young Alexander. He glitters with glory and doom. great depiction of the details of 3rd century Macedonian life, the smells of horses,, unwashed men, and pristine meadows. read it to enter another world.

This was recommended on one of the "what to read after the Aubrey-Maturin series" message boards.

Sadly, this book is nothing like those. It is a jumbled confused story with long passages of boring prose. I have no idea why this book is rated so highly.

I forced myself to finish it, but won't be continuing with the series.