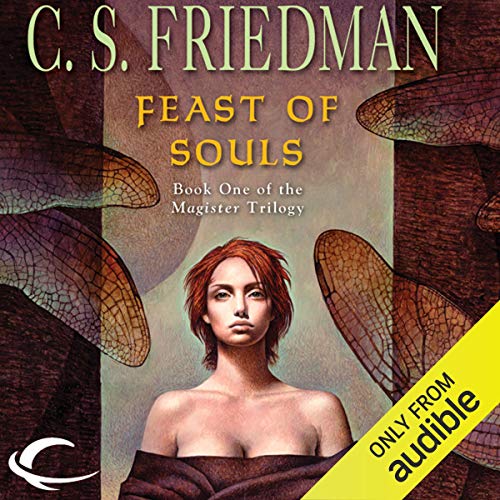 The Price of Power - Would You Pay It??

C.S Friedman is the author of my favorite fantasy series, The Coldfire Trilogy so I was excited to begin the Magister series. Friedman writes anti-heroes like no other. I never knew there could be so many shades of gray.

Feast of Souls introduces us to a world of magic where the cost is high, your soul or in the case of some, the souls of others. There are two different practitioners of magic, witches (both male and female) who power their art with their own soul fire, but the human soul is finite and once consumed means death. Then there are the mysterious Magisters, an elite group of males that power their sorcery with the souls of others, thus giving them almost unlimited power, but at what ultimate cost?

Friedman excels at creating a world in which the powerful rule by manipulating others, and yet you feel sorry for them. The varied cast of characters all had separate stories yet seemed to be guided to the same end. Friedman weaves a complicated net drawing each character closer and closer together for an exciting climax.

Elisabeth Rogers does an excellent job creating individual personalities for each character. I have read Feast of Souls twice before but listening to it felt like reading it for the first time again. I am looking forward to listening to the next two in the series.

If you liked Feast of Souls, I highly recommend Friedman's Coldfire trilogy, which is also available on Audible.

This is a story more easily followed if you are reading it rather than listening. So many things can be said in writing that............simply do not come across in narration. The story jumps around because there are many main characters who are also telling the story from their point of view all converging later in the other books.

I was originally drawn to the book because of the narrator. She did a great job in this series. Still I found the that listing to this story twice was almost an essential thing to pick up all the things you would have understood reading it. Changes in places and who is talking and even time issues overlap. It was confusing at the start. After listening to the whole series I can appreciate all of it. I will have to say I did enjoy the series but this first book was not as enjoyable as I had hoped. In the end I am glad I finished the series. At some time later I would listen to the whole series again.

If you could sum up Feast of Souls in three words, what would they be?

I enjoyed the way C.S. Friedman portrays internal struggle of a tormented young woman determined to survive by any means. Even if it means killing a part of herself.

Have you listened to any of Elisabeth Rodgers’s other performances before? How does this one compare?

Elisabeth Rodgers has done an outstanding job with this narration. Each personality comes through clearly and never had an issue with confusing voices during conversations.

I really have no ideas.... Sorry for the lack of creativity here...

This is a brilliant idea taking concepts from childhood fairy tails and turning them into realistic and for the most part horrifying realities. C.S. is always a good read when you want to identify with the darker half of your imagination and fall in love with an evil protagonist.

What did you love best about Feast of Souls?

What was one of the most memorable moments of Feast of Souls?

Ripping off the head of a child!?!

What does Elisabeth Rodgers bring to the story that you wouldn’t experience if you just read the book?

Her voice gave me a different mental picture of the leading lady than just the words would have done...more approachable.

The ending was a real cliff-hanger.

Basically, an interesting premise, with ok writing, but boring characters and a boring plot.

Now, the last four hours of the book are enjoyable. So if you don't mind plodding through 14 hours of boredom, to get to a good ending, than maybe this book is for you. If I had not been on a 22 hour drive when I started this book on my iPod, I would not have finished it.

I will not continue with the series.

This review covers the trilogy as each book in quality and content is about the same, so if you're going to listen to the first book you may as well listen to them all as they are consistent throughout.

I like Friedman for the darkness she portrays in the human soul. This series is one along the lines of "soul sucking vampire" types as her excellent Coldfire series was. This series however doesn't quite reach the heights of that one.

The problem I have with this series is that there are too many central characters for development and thus each is lacking something despite their importance to the storyline. In particular, the main character, Kamala has significant gaps in her story and in some places her story lines end quite abruptly and unsatisfyingly. The feeling of "loose ends" is evident in a number of places. One gets the feeling she isn't fleshed out enough.

Despite this, the story ideas are solid and overall it's a good series to listen to if you are a fantasy fan. Had this series been longer to allow full development of the characters it would have scored 5's across the board.

The narration was good although with an even mix of male and female roles it may have been better done by a man and woman as Elisabeth did struggle on some of the male voices.

This is worth a listen to as there are some great ideas and concepts with a solid story line and telling of it.

If you could sum up Feast of Souls in three words, what would they be?

What other book might you compare Feast of Souls to and why?

I would say Feast of Souls compares well to Robert Jordan books and other fantasy books of the same type. Though the entire thing may seem a bit wordy, it's refreshing to me since most books lately, especially self-published, lack the quality, intelligence and wit that had always been in literature before. If you like fantasy but don't like the YA aspect that seems to have overrun much of recently written fantasy, you'll definitely enjoy this.

I usually enjoy scenes when Kamala is locked in a battle of minds with any of the other Magisters. They're extremely entertaining and charged with an addicting sort of energy.

Not until the last book, and because that is so far away, I don't want to spoil it. Just know that many of the characters will take you by surprise. It's refreshing to read about people who aren't entirely predictable.

If you don't like reading for the sake of reading, don't admire when an author weaves words together artfully and instead prefer unoriginal plots and unimpressive language, this series is not for you. If, however, you love when an entirely new world unfolds before you filled with characters unlike any others, you will adore this series.

Did not care for this book

Would you try another book from C. S. Friedman and/or Elisabeth Rodgers?

Possibly, I would have to look deeper at the story line and read the reviews

What was most disappointing about C. S. Friedman’s story?

This story took too long to develop, it became boring

Would you be willing to try another one of Elisabeth Rodgers’s performances?

Possibly, I did like Elisabeth's ability to bring out different characters in her voice.

Disappointment, I guess I was looking for something else

Narration is well done and pleasant to hear. The story stays on track and doesn't splinter into too many plot lines á la Wheel of Time, GoT etc.

Yes, it's a good solid fantasy book and anyone into fantasy would probably enjoy it.

Would you recommend Feast of Souls to your friends? Why or why not?

Which character – as performed by Elisabeth Rodgers – was your favorite?

I really enjoyed the witch queen. She's an interesting character, with a rich history. She doesn't have the long life of the Magister's, but she is a crucial stone in the Magister's political world. Her timeline goes in a lot of interesting places.

It's a very slow burn. There's a lot of set-up with the world and characters. It's a bit boring for the first 60-70 percent, but there is good pay-off. It leaves a lot of open plot-lines that will probably be tied up in the rest of the series.

This is my first exposure to C.S. Friedman, and she creates a very detailed world with a lot of backstory. From the first female magister, to these huge countries each with their own unique cultures and customs. There were some interesting rules between the Magisters as well, they can't actively kill each other, but they're rivals which didn't make a ton of sense as they were essentially demi-gods, but could cause mischief and essentially this world's version of trolling on another. Interesting concept, but I didn't see how it went anywhere.

Narrator Elisabeth Rodgers does a pretty good job. I've listened to her from the Georgina Kincaid series by Richelle Mead where she did a solid job as well.

Overall, this is an OK book. It's a very slow burn. There's some interesting concepts from women's rights (first female magister, witch queen, etc.), the magic system life being the spell component, the world itself is rich and has a lot of interesting history. Part of me thinks this story should have been 10 hours longer, to build the world more completely, but there just wasn't enough substance to warrant 18 hours much less 28. I'm looking forward to book 2, but it's not on the top of the pile.