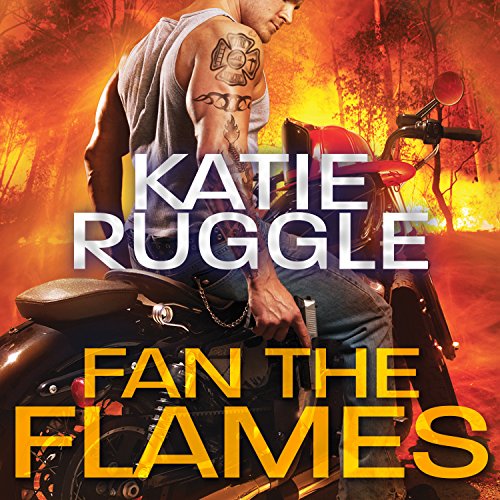 As a motorcycle club member and firefighter, Ian Walsh is used to riding the line between the good guys and the bad. He may owe the club his life, but his heart rests with his fire station brothers - and with the girl he's loved since they were kids, Rory Sorenson. Ian would do anything for Rory. He'd die for her. Kill for her. Defend her to his last breath - and he may just have to. Every con in the Rockies knows Rory is the go-to girl for less-than-legal firearms, and for the past few years she's managed to keep the peace between dangerous factions by remaining strictly neutral. But when she defends herself against a brutal attack, Rory finds herself catapulted into the center of a gang war, with only Ian standing between her and a threat greater than either of them could have imagined.

Lots of action and suspense! I am really enjoying this series of books and this authors writing style. I really love the humor she puts into her books, too. This was a great read. Thanks!

First book I read by this author and I was not impressed. The heroine is naive even though she owns a gun store. I found it to be too dramatic, and boring at times. Too much "innocence" for a twenty something year old, gun stores owner.

This book had me dying! I loved the dialog as much as the internal thoughts. Loved these characters and the narration was good too! I can't wait to read/listen to another one by this author.

have to say it again

what can i say that i have not said already!!! love the series vould not put it down...

love every story she tells

This is Ian and Rory's story. It has a wonderful small town flavor with warm, interesting, and fun characters. The suspense and excitement are totally entertaining and enjoyable. The narration is very good!

What a thrill ride!

Ms. Ruffle has done it again!! The Rocky Mountain fire Department has its hands full. Fires, explosions, and back stabbing, of my!!
I listened to this book almost straight through (except for a few hours of sleep) I highly recommend this book!!

I really enjoyed this book. The story itself was a little slow (to me) at times but the general feel and the chaos that unfolds makes it all worth while. Ian and Rory have both had a special bond since they were kids. It’s not something anyone else knows about. Hell, it’s not even something they talk about, but it’s there. And it all started with a pink cupcake. #Thuds

When the local MC starts making trouble for Rory, it puts Ian in a tight place. Rock, meet hard place. His family is the MC, well part of his family. The rest of his family is the boys and girls in bunker gear. Firefightingnis a way of life for Ian, and it’s a life he loves. Being on the thin line between good and bad isn’t all it’s cracked up to be.

When Ian has to chose between his family and the elusive woman that runs the gun shop... well things start to get very interesting. It’ll be up to Ian to make sure she stays safe and to keep his own butt out of the hot water rushing his way.

This one wasn't as suspenseful as the first book. I was a little disappointed but it was a good read.

Really good addition to the series :)

This was a really good story. I liked Ian in previous stories so I was happy to see his book come up. It was enjoyable while being interesting and engaging.

Rory is an unusual woman. She was born to parents that were disillusioned with the world and became preppers, getting ready for the time when society goes to hell. Rory lost her parents 3 years ago and she took over the family's gun shop. Unfortunately, after being home schooled and conditioned since childhood to keep to herself, Rory doesn't socialize much.

Ian is a fireman and also a member of a motorcycle club that isn't necessarily on the right side of the law. Ian got a lot out of the club when he was younger and has always felt he owed them. However, he also has the need to help people and his brothers in the club saw his job choice as being a slap in the face. Things have been tense for a while and Ian's been trying to straddle the line between his two lives.

Ian and Rory met for the first time when they were 12 years old. Rory's parents tried to be self-sufficient and didn't buy much in the store but Rory got to go along on a rare trip and met Ian. Ian bought Rory a cupcake and started her love for rarely attained sugary treats. They saw each other over the years but never got too close. When Ian comes around and hears that Rory has been having someone lurking around the gun store at night and setting off the alarm, Ian becomes very protective.

Rory is apprehensive because she's had a crush on Ian since he bought her the cupcake but never thought he's want her in return. Ian had basically the same thoughts about her so when he realizes that Rory is actually attracted to him, he makes it his mission to win her. Rory holds back of course and denies the blooming relationship with Ian when everyone in town is talking about it but no one truly believes her protestations. There is trouble to deal with, part of it was already coming but part of it got exacerbated by issues that take place in this story. Allegiances are tested and some fall apart while others stand strong. Ian and Rory get through a lot danger and a good amount of drama, coming out of it doing well and heading towards and HEA together.

This was a really enjoyable story. I liked Rory as the heroine. She grew up being trained to be ready to handle anything...except human interaction. I really liked seeing her get her bearings, making friends as well as getting together with Ian. Ian was a great hero and I liked how he did what was needed to protect those he cares about. Overall, this was a really good story that kept me engaged through to the end so I'd recommend it. :D