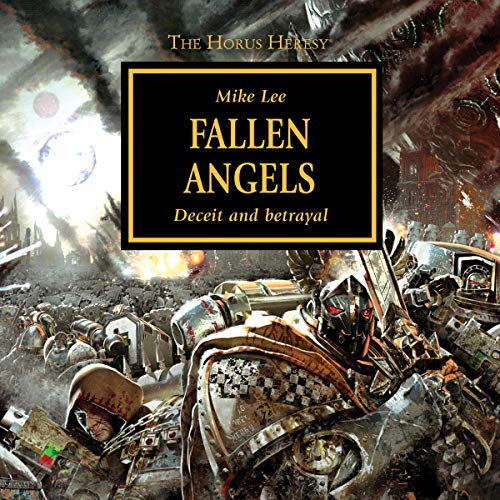 With news of Horus' treachery spreading across the galaxy, the Great Crusade grinds to a halt as the primarchs and their Legions decide where their loyalty lies - with the Emperor or with the rebel Warmaster.

The Dark Angels, too, face a time of testing, both among the stars and on their home world, Caliban. Luther, once Lion El'Jonson's trusted second-in-command, now languishes as an exile in all but name while his master struggles to thwart the traitors' advance upon the forge world Diamat. But an ancient evil gathers its strength beneath the surface of Caliban, and the First Legion will soon be thrust into a deadly conflict where all that they know will be cast into doubt.

Most of the voices give you the impression that the we are dealing with senile people instead of mighty Astartes. Some of the voices were great, but overall not to happy. Story is awesome, like in most of the HH novels.

A lot better than I had expected.

So, before I started reading this one, I had heard a lot of people saying it was one of the weaker horus heresy books, and so I went in with it with some strong reservations... I have to say though, it really was not one of the weaker ones.
There are multiple parts in the book that are completely fresh, ideas and themes and action that had previously not been seen in the heresy, and quite simply, I really enjoyed it.

History is written by the victors... But what stories could tell the defeated? Great book

This was a better Dark Angels book than the Decent of Angels. Unfortunately it leaves you hanging but in a good spot to help build suspense.

Another good Dark Angel HH novel. Half the book about Lion El Johnson and half about Luther.

Needs more Horus in these novels but still good.

read after Decent of Angels it carries on right

talk about a massive plot twist in the epilogue, holy shit. always read the epilogue people.

Surprising twist at the end. This one doesn't disappoint. Performance is very good as always.

Great Insight to the Fallen

Greatly enjoyed this book. Performance was spectacular. I was way more interested in the story about the Fallen than the Lion's conquest unfortunately. It was amazing to see the ideals of Luther which led to the Fallen.

The best of the series

I have nothing more to say than this is by far the best book of the series. It’s exciting, tightly written, compelling and leaves you wanting more.