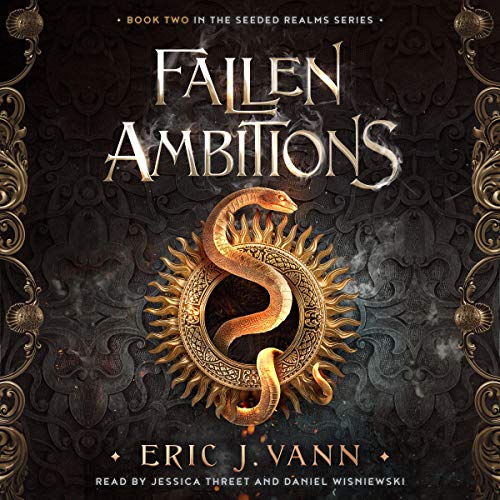 A palace lost in time. A revolution in flames. A betrayal brought to light.

Woken from his long slumber into a new and dangerous world, Lord Aziel was a legend before he could recall his own name. At great personal cost, he has successfully built a following in the most isolated reaches of Kadora - only to be struck down by the mysterious World Seed whose true intentions remain unknown.

Brought back from the brink of death by his beautiful Succubus Celia and proud Queen Astrel, Aziel finds his actions have attracted the attention of powerful enemies. With a Blood Curse sweeping across the neighboring lands and the specter of war looming, he must look beyond the Wilds if he is to survive and defend those he has pledged to protect.

It is an undertaking that will test the limits of Aziel’s powers and force him to question what it means to be a true leader. It will also bring him answers to the deepest questions about himself and his own existence: who had imprisoned him for all those centuries, and why? And what is he prepared to sacrifice to keep his loved ones safe?

Combining elements of fantasy, GameLit, and thriller, this second installment in the Seeded Realms will change everything you thought you knew about Kadora - and beyond.

Last book I gave it a 3star on story and a 5star on performance. But DANG DID U BLOW ME AWAY WITH STORY THIS TIME! Characters where incredible and it was so real in that people gave emotions and actually make right and wrong decisions it was amazing. Great job. Just wow I need the next book please

Better then the first

This books wold building and character growth are amazing. This holds a firm place as a new favorite book of mine.

I was pleasantly surprised by how much I liked this book. I really liked the fact that the sex was not covered in a cringy manner. the magic system is very robust and well designed. and the story has me very interested. I will definitely keep a eye out for the 3rd book. the narration did leave a little to be desired. while not bad several parts were hard to understand from speaking to quickly and not pronouncing the words clearly.

Dope story ...minus all the juvenile sexual crap

Truthfully, all the sexual moments don't read well. To me they r cringeworthy descriptions that remind me of a teenaged virgin whose never had sex, but who still spends all his time dreaming about it. Idk if the author is trying to stroke his own ego or compensate for something else, but all the sexual stuff is laid on waaaaaay too thick.

I honestly love the story, the magic system, the world building ...it's all dope!!!! He's done a great job with the important stuff. Ironically, it's all the sexy stuff that's a turn off. You don't need it my guy, believe in urself!!!

I believe in you, and I'm trying not to lose my respect for you ...cuz I think u have a ton of talent. This harem sexy time crap is beneath u. Honestly it's a crutch, and u don't need it. U can be great without it man.

Honestly, I just skipped through all the sexual stuff this time, and I think that'll be my strategy moving forward with the series. Although, that does take away from my relaxed listening experience ...that's the only way I'm gonna get through it.

Regardless, this is still a dope series overall, and I still highly recommend it!!!

Better than the first, which is also amazing

Usually authors, on their second entry, struggle to keep the excitement and mystery of their story going without either piling on questions tht never get answered or they just keep ramping up stakes.

this does neither, it introduces new ideas that are sensical and interesting, the stakes are high but believeable and best of all things actually get answered. A lot of books are afraid of wrapping up plot threads, ever. This author isn't because they know they can keep making new, just as interesting plot threads to unravel.

What a great start to the series so far!

Hard to put it down! I really enjoy all the character development in the series so far! The narration is perfect! Jeasica can really sing! I cannot wait for the next installment!!

Honestly this series is fantastic. A epic story in a unique setting, I recommend it to all that love kingdom building and fantasy adventure. can not wait for book 3.

is easily one of the best books I've ever heard, thank you and I eagerly look forward to the next book.

continues with amazing world building. luv the use of 2 narrators. can not wait for the next book

way to much from Emily in the beginning. I kept thinking why do I care about this character, what relevance does she have with the main characters? why not just give her a smaller part around the end? is this much of her perspective really necessary? other than this annoyance it was a great book.

I was long on the fence if I wanted to listen to this series but I have this far enjoyed it a lot and unexpectedly so with all the political stuff which I hate with a passion.

The two main characters are idiots if they don’t had such strong plot armor they would have been dead by the middle of the book. I strongly dislike it when the mc are suddenly stupid just to have some luck and get out off the situation stronger or unharmed and without consequences. It truly pisses me off i mean how is the character supposed to learn when everything stupid that he does is rewarded ?
And besides its just boring knowing that whatever mistakes you fav character makes will not have any consequences you just know that nobody is in real danger.
But i like the story so i hope it gets better in the next book.