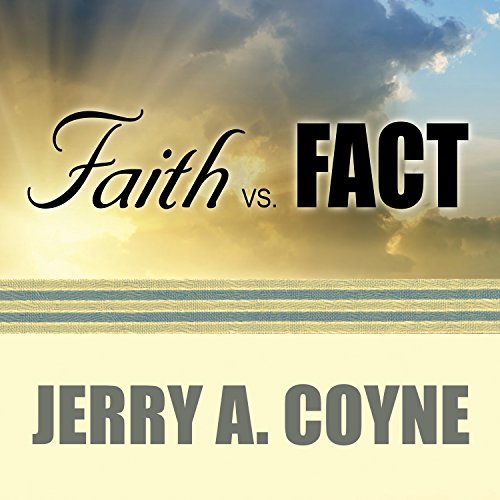 In his provocative new book, evolutionary biologist Jerry A. Coyne lays out in clear, dispassionate detail why the toolkit of science, based on reason and empirical study, is reliable, while that of religion - including faith, dogma, and revelation - leads to incorrect, untestable, or conflicting conclusions. Coyne is responding to a national climate in which over half of Americans don't believe in evolution (and congressmen deny global warming), and warns that religious prejudices and strictures in politics, education, medicine, and social policy are on the rise.

Extending the best-selling works of Richard Dawkins, Daniel Dennett, and Christopher Hitchens, he demolishes the claims of religion to provide verifiable "truth" by subjecting those claims to the same tests we use to establish truth in science. Coyne irrefutably demonstrates the grave harm - to individuals and to our planet - in mistaking faith for fact in making the most important decisions about the world we live in.

"[T]his is an important book that deserves an open-minded readership." ( Kirkus)

Jerry Coyne Does It Again

Ever since I stumbled across Coyne's "Why Evolution Is True" I've watched many of his lectures and talks. This book does not disappoint. It shows the inconsistencies latent in attempting to merge faith in a westernized personal Judeo-Christian God with what we've discovered about nature thus far. Excellent read and I definitely recommend the book.

A compelling case against superstition

A systematic and concise treatise of why religion has nothing of value to offer to society. It is a difficult read for both sides of the divide. How can one rationally argue the irrational?

A definite read, a "you must read this" read! Very well-argued positions from Coyne, succinct arguments and simple, practical refutations to common religious rebuttals. This might be my new first recommendation to anyone wishing to read up on the topic of the conflict/relationship between religion and science.

Upon purchasing this audiobook, I knew Jerry Coyne would be preaching to the choir again. His blunt and honest approach to this subject wasn't disrespectful in the least. I think that even as a theist, I would have been able to recognize this. If you want a book that politely explains the "New Atheist" perspective, complete with the science to back it up, this should definitely be in your audio library or on your bookshelf.

Faith Versus Fact is only the second audiobook I have with this narrator. That said, I didn't think he was an appropriate choice, but he did a brilliant job/

a thorough logical review of the evidence about

a thorough review of the credible evidence for why faith causes more harm than good.

Well written with solid arguments to favor science over religion. The reader was also very convincing.

Nice to see this perspective from somewhere besides the new atheists...

Most interesting bits were when Coyne breaks down SJG's famous 'NOMA' argument and how faith affects real lives via the issue of stem cell research and child abuse. Might seem a little dismissive for theist readers and a little 'introductory' for existing atheists, but is generally a great perspective outside the usual 'new atheists'z

I have nothing negative to say about this book. Coyne's writing exemplifies an excellent combination of clarity and eloquence, comparable to the prose of Dawkins and Pinker. It's a beautiful thing when scientists have the ability to surpass what the average reader sees as vapidness in typical science writing and manage to fascinate from the sphere of nonfiction.

Enjoyed the reader's delivery and pace.
Book is well-researched and has a good balance of faith vs fact. I would absolutely recommend it to my friends.

Excellent for any mind open to logic and reason.

The contents of the book are excellent, well reasoned, and based in sound logic. If a religious person was honestly inquiring of me as to why non believers reject religion and superstition this would be one of my top two recommendations. The downside is that the narration will easily put you to sleep if you aren't focused on what is being said. But don't let that detract you. The contents far and away outweigh any negative aspects of the audio version.

One of the best books ever!

I just finished listening to the audiobook for the second time. Jerry Coyne explains the incompatibility of faith and fact in a very convincing and concise way.

You will be surprised how big the difference of religious belief in the USA versus Northern European countries is.

I wish that politicians around the world would read this eye-opening book.

I also highly recommend the author’s book „Why evolution is true“. Any reasonable person would be convinced that evolution is a fact, after having read it.