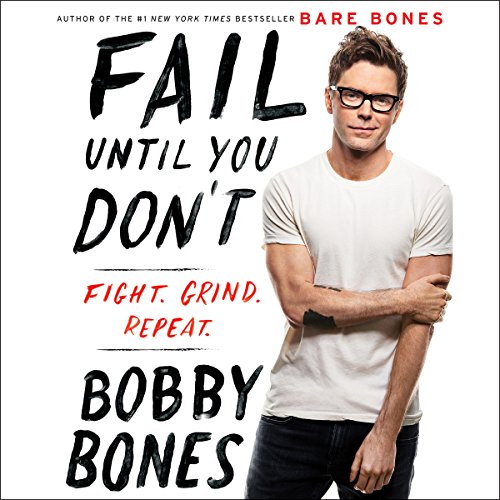 Fail Until You Don't

Fail Until You Don't

The number one New York Times best-selling author of Bare Bones, host of the marquee morning program The Bobby Bones Show, comedian, and dedicated philanthropist delivers an inspirational and humorous collection of stories about his biggest misses in life and how he turned them into lessons and wins.

Bobby Bones is the youngest inductee ever into the National Radio Hall of Fame, alongside legends Dick Clark, Larry King, and Howard Stern. As "the most powerful man in country music" (Forbes), he has reached the peak of his profession and achieved his childhood dreams. Each weekday morning, more than five million fans tune in to his radio show.

But as Bobby reveals, a lot of what made him able to achieve his goals were mistakes, awkward moments, and embarrassing situations - lemons that he turned into lemonade through hard work and humility. In this eye-opening audiobook, he’ll include ideas and motivations for finding success even when seemingly surrounded by impossible odds or tough failures. He also includes anecdotes from some of his famous friends who open up about their own missteps.

Bobby’s mantra is: Fight. Grind. Repeat. A man who refuses to give up, he sees failure as something to learn from - and the recollections in this funny, smart audiobook, full of Bobby’s brand of self-effacing humor, show how he’s become such a beloved goofball.

Bobby Bones is great. I love his radio show but if you are a regular listener, as I am, you have probably heard most of this book. I do like how when he narrating the book, it feels like he is just talking to you, like you are holding a conversation.

love it....super fan of Bobby Bones..hope there is a book 3, keep up the good work!!

No Bones About It-Damn Good Book!

I enjoy the Bobby Bones Radio Show and BB’s point of view. So choosing this book was a no-brainer! Much to my surprise, Bobby was the one who actually read it which made it even more enjoyable. It was just like he was ‘talking’ to you—not reading a book. So many authors just read with no emotion, no variation what-so-ever in their tone, but not Bobby—your can barely tell that he’s actually reading it! Lots of good information and I have to agree with his closing thoughts—go back and read (listen to) the book again—but this time...I have paper in hand to take notes—too much good stuff to not write down...or maybe I’ll jot it down on my phone, then screenshot it!😉 Thanks Bobby—Awesome Job! Headed now to listen to your first book—Bare Bones!

Very down to earth, which I found refreshing.

I enjoyed Bobby's run of the mill every day life experience. Gives hope to the underdog.

I enjoyed how relatable it was! since I listen to Bobby's morning show, I thought it was entertaining to hear it actually narrated by him. I connected to his stories and his advice hit home several times. I had my son listen to it with me and appreciated some of the life lessons shared that even made him say "that makes sense"!!!

I think that after the success of the first book Bobby Bonnes was pressured to write a new book.

Second time on this book, first I read now Bobby reads to me. He is so inspirational and makes you believe anything in possible. Hoping for another book of his for my collection

Bobby does a great job narrating his book. Lots of great advice told through personal stories.

loved it! I will be listening again and keeping it in my library of books

Bobby Bones at his best!

It's Bobby at his best, doing what he does best! He is able to share his story in a motivational way, and make it relatable to everyone who wants to make more out of their life. I recommend it for anyone who wants a kick-in-the-butt at achieving their goals, or who just likes the Bobby Bones radio show!