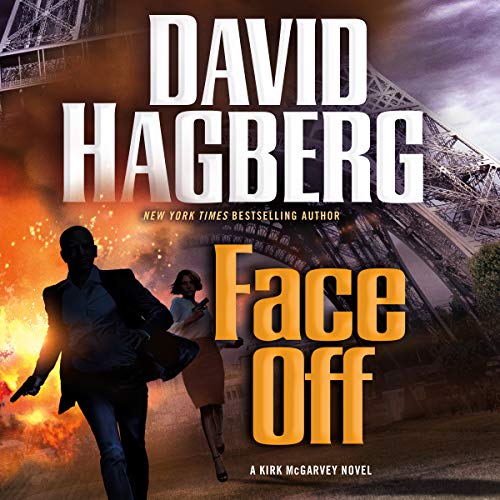 Kirk McGarvey is lunching in the Eiffel Tower when terrorists attempt to bring the Paris icon down. He springs into action to stop the attack, only to find there’s a much larger plot at stake. One that aims to force the incompetent US president out by pitting him against Russia.

But Putin himself is eager to avoid World War III. When a Russian nuclear weapon goes missing and is found heading to the US, Putin enlists McGarvey’s help in stopping it.

The stakes couldn't be higher, and the outcome couldn't be more in doubt. Only McGarvey stands a chance of intervening before it’s too late, in a race against time across Paris, Istanbul, Moscow, and Washington, DC.

Where are the first 21 books? This is EXCELLENT!!!

I really enjoyed FLASH POINTS, the previous book in this series. Unfortunately that was the 22nd book in the series. This is the 23rd and I enjoyed it just as much. It's a good thing these books can be listened to as stand alone books but it would sure be nice if the first 21 books were eventually made available on Audible. In this book, Kirk McGarvey is in France vacationing with his girlfriend Pete. He decides to take her to the Eiffel Tower for lunch and to propose to her but while there he sees something that strikes him as suspicious and has to investigate. He finds there are three suicide bombers ready to take out a support from the tower. He deals with them and takes off after a couple who had left only minutes before, telling Pete to empty out the restaurant. And off they go on a global hunt for the would be terrorists. Pete is kidnapped and McGarvey is on a mission. Not just to rescue Pete or for the terrorists but for who put them up to this and what he finds is not anything close to what he expected. Jeff Gurner's narration is spot on. He is perfect for this series. This book has my HIGHEST RECOMMENDATIONS. If you found this review helpful please indicate so. Thank You.

I did not realize Hagberg's novels were finally available in audio format until I read her three reviews of his novels beginning almost two years ago by Audible Listener Shelley (by the way, if you are a fan of the mystery/thriller genre you should be following Shelley and rewarding her outstanding reviews with helpful votes). Hagberg, a very prolific author for 35 years, has been writing novels in the Kirk McGarvey series for at least 30 years. The old man continues to pump out novels as a dizzying pace. You can count on him for fast paced novels with solid plots and lots of action. His Kirk McGarvey series all fall into the espionage category. FACE OFF certainly does not disappoint. Jeff Gurner is an excellent choice to narrate this series.