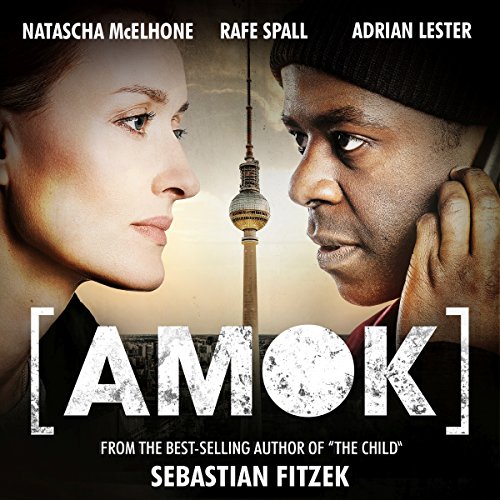 This was to be her last day alive. The renowned criminal psychologist Ira Samin prepared her suicide thoroughly. The death of her eldest daughter had weighed too heavily on her conscience for her to carry on and she yearned for one last drink to raise a toast to oblivion. Her morbid plans are interrupted and she is called in to negotiate a gruesome hostage situation at a radio station where a psychopath is playing a morbid game.

While the show is on air, he calls people from the phonebook at random. If they pick up the phone with a certain slogan, a hostage is set free. If they don’t, then the hostage is unceremoniously shot. The man threatens to continue playing this game until his fiancée arrives at the studio. The only problem is that his fiancée died several months ago....

Amok is a tense psychological hostage thriller set in a Berlin Radio Station, from the internationally renowned author of the best-selling Audible Original Drama The Child.

Explicit Language Warning: You must be 18 years or older to purchase this program.

Got to hear the entire production!

After the first three chapters, I'm hooked. Going to download the entire book right now. Sounds good and left me wanting to hear it in its entirety.

Radio drama makes a come back!

What made the experience of listening to FIRST THREE FREE CHAPTERS: Amok the most enjoyable?

I am usually a purist and love to add background via my own imagination; additional sound effects, 2nd & 3rd person voices and dramatic music. The sample really gave me flashbacks of the radio dramas I used to listen to while on long drives. "Amok" seems like a creation that will be entertaining and FUN!

As any good series keep you hanging; "Tune in next week when we hear Jan say 'I think I left the stove on' ". This sample hints at numerous story lines. It brings you to the brink of a climax and then steps back to watch you wither.

The depth of a an audible drama, as opposed to a single voice.

Having only the sample to go by, an effective tagline may be difficult:" Explosions of Love, Mystery and Buildings.. just when you thought it was safe to breathe!"

For fans of radio dramas, this story seems to promise a great ride. I look forward to seeing it through.

Would you listen to FIRST THREE FREE CHAPTERS: Amok again? Why?

No, it's not my kind of story. It flows more like a spy thriller, so if people enjoy those types of books, I think they will enjoy this.

Not my usual genre but this really kept my attention from the start. Very disappointed when it abruptly stopped! I’m anticipating hearing the reminder.

I can say I really didn't care for this story even though it was okay story it just didn't catch my interest i guess .

What was most disappointing about Sebastian Fitzek’s story?

Do you think FIRST THREE FREE CHAPTERS: Amok needs a follow-up book? Why or why not?

no, i think it should stay like it is

Too Over the Top

Definitely not my cup of tea. The story has the potential to be an exciting thriller, but it was just so overdone that I couldn't take it seriously. I won't be listening to the full version of this drama any time soon.

This did nothing to make me want to listen to the whole thing. So, glad it was free. We have a woman who is planning her suicide and a guy who is going explode a bomb in a busy area. It ends before we find if they succeed and why they are doing what they are doing. I am not big in to Mysteries, so I found I did not care enough to buy the book.

The production and narrators were okay, but did not really stand out.

Powerful in a short incisive manner. Tale hits you like a small knife, right through all your emotional senses. So mercilessly real

This book is a treasure!

The author did a good job presenting the material with helpful examples. I hope this speech book can help you very much.