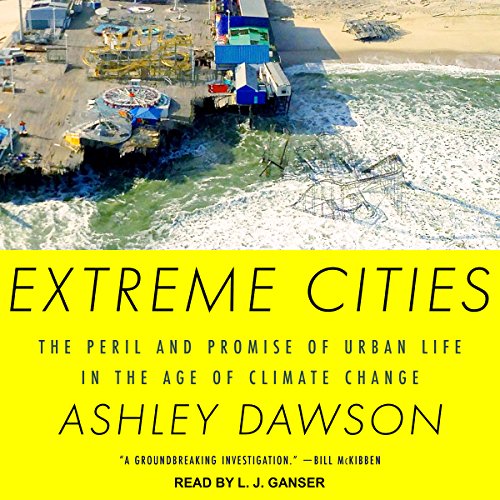 How will climate change affect our lives? Where will its impacts be most deeply felt? Are we doing enough to protect ourselves from the coming chaos?

In Extreme Cities, Ashley Dawson argues that cities are ground zero for climate change, contributing the lion's share of carbon to the atmosphere, while also lying on the frontlines of rising sea levels.

Today, the majority of the world's megacities are located in coastal zones, yet few of them are adequately prepared for the floods that will increasingly menace their shores. Instead, most continue to develop luxury waterfront condos for the elite and industrial facilities for corporations. These not only intensify carbon emissions, but also place coastal residents at greater risk when water levels rise.

In Extreme Cities, Dawson offers an alarming portrait of the future of our cities, describing the efforts of Staten Island, New York, and Shishmareff, Alaska residents to relocate; Holland's models for defending against the seas; and the development of New York City before and after Hurricane Sandy. Our best hope lies not with fortified sea walls, he argues. Rather, it lies with urban movements already fighting to remake our cities in a more just and equitable way.

As much a harrowing study as a call to arms, Extreme Cities is a must-listen for anyone concerned with the threat of global warming, and of the cities of the world.

"Dawson makes a convincing case that, unless urban dwellers and civic leaders engage in a fundamental reconceptualization of the city and whom it serves, the future of urban life is dim." (Publishers Weekly Starred Review)

It is shocking to witness in this work the misappropriation of a question as important as climate change to promote what amounts to anarchism.

For hundreds of pages, the author raves against what he calls “fossil imperialism” without bringing forward any solution or alternative. Finally, beginning the last quarter of the book, he brings forth the notion of “disaster communism”, the solidarity that exists during a major crisis which he seems to believe could become a stable system of organisation.

There is nothing redeeming in the author’s style:

• it is provocative with quotations not only of Karl Marx but also of Lenin;
• it is repetitive and replete with needless quotations and overly academic vocabulary, such as interlocutor;
• it provides a pointless level of details (regarding for instance relief programs for flood victims);
• false information is provided, Ségolène Royal being described for instance as an adamant right-winger whereas she is a life-long member of France’s Socialist party.

“ Elites “ are attacked and criticized a countless number of times, the author neglecting to acknowledge that his own status as a tenured university professor certainly places him very much away from the proletariat.

In the audio version, the text is all the more aggravating that the narrator does not seem to quite understand what he says and very often emphasizes the wrong words. This is notably true for foreign names, as if he wished to underscore that he succeeded in uttering them.

This work should consequently be avoided at all costs.

This was a good idea for a book and it got off to a good start but it faded quickly. A little past the half way point of the book the writer falls into the same trap that many other books on climate change do - he began demonizing anyone who not only fail to agree with him but also those who agree but don't have the same worldview or philosophy as him. The book quickly became more about capitalism than about climate change. Many reports were referenced from the 1990s onward that, although they warns of the global threat of the climate change, because they don't embrace Mr. Dawson's personal philosophy and worldview they are ridiculed and demonized. This is when words like "racist" are broken out and used to describe the worldview of well established scholars and thinkers like Robert Kaplan.

I wish the author would have stayed on point bu this is something a lot of the books on climate change do. You can't be anti-climate change and also pro-innovation and markets at the same time in their view.

It's mostly a communist rant against Michael Bloomberg. It blames global warming on capitalism. It says we can't fix global warming unless we have a totalitarian communist state. Even the reader spits his words as if he hates everything not communist. It's hard to believe anyone would publish this. I'm shocked Bill McGibbon lends his name to it.