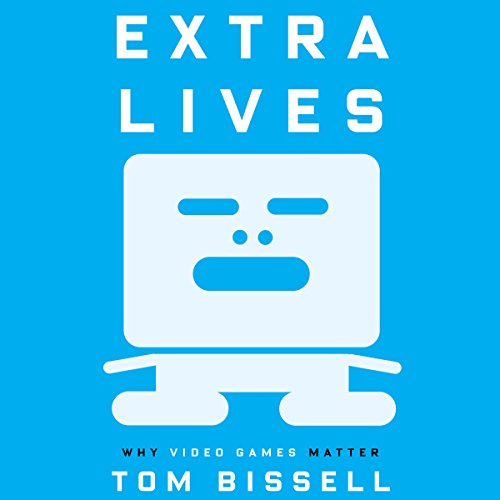 Tom Bissell is a prizewinning writer who published three widely acclaimed books before the age of 34. He is also an obsessive gamer who has spent untold hours in front of his various video game consoles, playing titles such as Far Cry 2, Left 4 Dead, BioShock, and Oblivion for, literally, days. If you are reading this copy, the same thing can probably be said of you, or of someone you know.

Until recently, Bissell was somewhat reluctant to admit to his passion for games. In this, he is not alone. Millions of adults spend hours every week playing video games, and the industry itself now reliably outearns Hollywood. But the wider culture seems to regard video games as, at best, well-designed if mindless entertainment.

Extra Lives is an impassioned defense of this assailed and misunderstood art form. Bissell argues that we are in a golden age of gaming - but he also believes games could be even better. He offers a fascinating and often hilarious critique of the ways video games dazzle and, just as often, frustrate. Along the way, we get firsthand portraits of some of the best minds (Jonathan Blow, Clint Hocking, Cliff Bleszinski, Peter Molyneux) at work in video game design today, as well as a shattering and deeply moving final chapter that describes, in searing detail, Bissell’s descent into the world of Grand Theft Auto IV, a game whose themes mirror his own increasingly self-destructive compulsions.

"A scintillating meditation on the promise and discontents of video games....Bissell excels both at intellectual commentary and evocative reportage on the experience of playing games...If anyone can bridge the aesthetic chasm between readers and gamers, he can." ( Publishers Weekly)
"Bissell explores not just his own affection for video games but also the games themselves. What separates good games from bad? Where do video games fit on the sliding scale of art?....Not just for gamers, the book should also appeal to readers who have some serious questions about the nature and impact of video games." ( Booklist)
“Bissell successfully dissects key aspects of the medium with razor-sharp sense and artfully crafted analysis. A thought-provoking, thorough, and ultimately personal study of the industry and its denizens.”(Cliff Bleszinski, design director, Epic Games)

This book is a refreshing look at game design from a player's perspective. The author rightly points out that gaming critique now is now solely limited to whether a new game is entertaining enough to be worth spending some money. If you've enjoyed any PC or console game for dozens of hours you've wondered why is this particular form of game play so uniquely fun? The author explores the answers using many major titles (but will invariably miss some of your personal favorites). He confesses a bias for console games (a controller over a keyboard) as an avid PC gamer I found the distinction not pertinent to book's themes. He poses many excellent questions: What is the nature of storytelling in a video game? How much and what impact do good writers have on a story? Should the game's story drive the player or should the game design allow the player to drive the story? What are the possibilities of open-ended story telling? (as opposed to cut scenes/cinematics) which the author and game designers view as limiting at best. He describes major titles, so one can understand the features that were overlooked by above mentioned limited critical perspective. This includes a notorious car jacking series (which I've smugly avoided as trashy) describing the many details of the extraordinarily rich virtual world it creates. Another recent gaming flop, the latest in the an FPS series set in landlocked Africa, instead of its previous tropical setting, (the latest panned by many as poor) is described for its completely unscripted physics and unique character/NPC interaction. He covers the skills to needed to complete the now outdated 2D scrolling games (i.e. why they were so fun in their day) but mainly describes role playing & shooter games as well as few obscure but completely unique and award winning games. If you haven't explored every single last major video game franchise at the very least you'll learn of new unique gaming experiences to be had.

Interesting, even for a novice...

With the exception of a handful of hours at Goldeneye and Super Mario Galaxy, I haven't played video games since the days of the SNES. Sometime last year, I saw what kids these days were playing and was quite frankly was scared. Not because of the super violence in them. But because the apparent limitless entertainment possibilities of them seemed to threaten my business - movies - with obsoleteness. I've been looking for a book about video game aesthetics and with this I finally found it. The narration is personal and casual - making me wish that more authors did their own narration instead of hiring "professionals".

An interesting, well-informed and very well performed book. Occasionally a little too subjective (as in off topic), but the biggest problem I had with the book was that very little of the content provided any evidence or compelling argument for why video games matter. For anyone looking for a glimpse into the gamer experience it might be very rich, but being well familiar with the gaming world already I felt let down by a lack of insightful commentary. Feels like a missed opportunity or maybe a book that was finished and published without enough reflection.

Gamer or Not, Must Listen

Extra Lives is an incredibly interesting account of the authors personal experience with video games. It's not quite what I expected, but it was incredibly enjoyable.

Ever Wonder about Video Games?

First, I am not a gamer. Second, I try to find books that inform me about subjects unfamiliar. This book will inform and excite those seeking to understand the attraction of games. It will inform people with family members and friends who spend hours, in the dark, competing with others on-line.

The book combines gaming history, psychology of gamers, programming, and the development of gaming as an art form.

The book is wonderfully written and read by Tom Bissel. It will keep the interest of anyone who listens.

If you like video game review anthologies, this is your book.

The interviews with game designers were interesting, but I didn't expect and was uninterested in the psychoanalytical self examination that is the other main aspect of the book.

Which character – as performed by Tom Bissell – was your favorite?

There is only one character in the book, since it's basically autobiographical; the author. Yet he's still not my favorite.

If you could play editor, what scene or scenes would you have cut from Extra Lives?

I'd cut out all the left wing political statement nonsense.

This book will absolutely NOT give an argument of any substance for why video games matter. If anything it will give an implicit argument that they are equally as ephemeral as the different other drugs the author describes using in the book. I believe they do matter, but no self referential indulgent blather can possibly argue for that belief.

A highly personal account of one person's relationship to video games. Lots of interesting thoughts and reflections. It definitely kept me entertained. Maybe not for everyone, but as an avid video game lover, this was a joy to listen to.

Intellectual and motivating perspective of games

Must say more about words that come to mind that I feel described this book more than anything else; motivating, interesting, intellectually sound, grand perspective, enjoyable, entertaining, confusing, lost, found, encapsulating, thought-provoking view on not only games but art and a kind of autobiography journey of one man's experience in games and game culture.

Was not as expected based on the title

I agree that the subject matter of this book was interesting, but the point of the book was “ why video games matter “ and the author never really wrote about this topic in this book. The author talked about specific games and some criticisms he had on those games, but he did not explain why those games, or games in general, matter; if he did I just didn’t understand the way he chose to explain it. Overall I learned some interesting things about video games but I wish the advertised subject matter was more talked about in this book.

I really loved how his words related to my experience in playing the featured games.