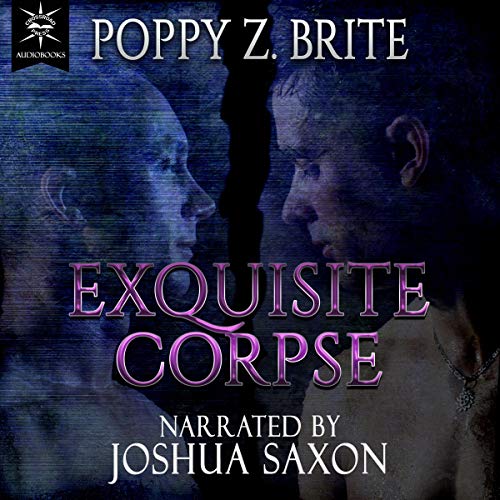 From the author of Lost Souls, Drawing Blood, and Wormwood comes a thrilling and chilling novel that best-selling author Peter Straub says serves as a “guidebook to hell”.

To serial slayer Andrew Compton, murder is an art, the most intimate art. After feigning his own death to escape from prison, Compton makes his way to the United States with the sole ambition of bringing his “art” to new heights. Tortured by his own perverse desires, and drawn to possess and destroy young boys, Compton inadvertently joins forces with Jay Byrne, a dissolute playboy who has pushed his “art” to limits even Compton hadn’t previously imagined. Together, Compton and Byrne set their sights on an exquisite young Vietnamese-American runaway, Tran, whom they deem to be the perfect victim.

Swiftly moving from the grimy streets of London’s Piccadilly Circus to the decadence of the New Orleans French Quarter, Poppy Z. Brite dissects the landscape of torture and invites us into the mind of a killer. Exquisite Corpse confirms Brite as a writer who defies categorization. It is a novel for those who dare trespass where the sacred and profane become one.

Twisted AF and fun too

the story of two serial killers during the AIDS crisis is quite unique in its lovely twist and turns of words and verbiage.

i highly recommend this listen to it alone so you can laugh out loud at the naughty bits and the guilty pleasure that you receive from empathizing with the serial killer as so deliciously played and portrayed by the wonderful calming tones of Joshua Saxon!

this book is grotesque but beautifully written. this is a book that with occupy your mind for a long time

Surprisingly warm for a book about dead things

There's a lot going on here. I loved the social commentary on the wide range of issues facing the gay male community. The characters were well written and I was easily attached to many of them. The narrator did an excellent job, bouncing from voice to voice and his voice fit the tones of the wordage so well. In case anyone is wondering if this book gets hot and steamy at all, it does. There's wasn't anything in the novel wet and wild enough to get me going, but I could see this book doing the trick for other readers. My only complaint boils down to personal taste: I could have gone for a bit more cannibalism. If you want a story about a jazzy Jeffrey Dahmer, this might just be the book for you!

my first poppy and it was exquisite. the narrator only enhance the lurid story with his growling dark voice.

if you like horror and gay fiction this is the book for you. I enjoyed the description of one of my favorites city New Orleans.

Literally my all time favorite book

I was so happy to have found the audiobook version of this book it has always been my favorite. Since downloading it I’ve listened to it through three times this week. It’s the only book I’ve ever read that literally hurt my heart for the ending, it’s like losing my best friends every single time, absolutely devastating but I can’t stop going back.

touching commentary on homophobia, I guess

save for the monologue towards the end about HIV, the rest of the book was rather uninteresting. I wish I had more to say about this book, but there's really nothing too interesting about it, and once you realize these characters are carbon copies of real life serial killers, and elements of their real life stories, it sort of takes you out of the story. just read the plot synopsis on Wikipedia.

Killers on the Road!

What can be said about EXQUISITE CORPSE that hasn't already been said? Even though this read is all the things everyone says it is, (gross, disgusting, explicit), it's much more than that.

Set in the time when HIV and AIDS were just becoming known terms, two men were destined to meet in New Orleans. Andrew, a serial killer recently escaped from prison in a way Edmond Dantes would have admired; the other a wealthy, long time New Orleans resident named Jay whose tastes mirror Andrew's. They prowl the streets of New Orleans together, searching for new prey. Will they find it? Will they ever be caught? You'll have to read this to find out!

Perhaps this would be a good point to say choose this book carefully? In this time of trigger warnings, this book has them all. Be warned. All that violence, homosexual sex, cannibalism and extreme horror are here; the warnings are true.

But for me, there was an entire backstory which consisted of a number of things: how gays were treated, labeled, and bullied at that time in American history. How when the HIV/AIDS epidemic began it made life for gays even worse. Not only were they having to watch their friends and lovers die, they had to endure humiliation and violence daily in their own lives. What kind of life is that? What makes life even worth living, knowing that you'll be taunted, laughed at, beat up, dragged through the mud, and maybe even killed, and no one would care. They'd say you got what you deserved...how long before you start thinking that maybe "they" were right?

Joshua Saxon, the narrator, delivered a fine performance, that I'm sure must have been difficult at times, considering the subject matter. Despite all of the violence and gritty sex, he, (in conjunction with the author), somehow conveyed an air of melancholy sadness that seemed to hover over the entire story.

It was that melancholy sadness that stood out the most for me. Sure, it's well written and once again, the shocking violence and homosexual sex permeated nearly every chapter of EXQUISITE CORPSE- but none of it even began to touch the despondency and grief I felt emanating from every single page. (Do you still phrase it like that when you're listening instead of reading? I say yes.)

Drawing out my empathy, even in the midst of all the nasty things happening, means that the author got to me, and most likely not in the way they intended, but then again, maybe so? Maybe I'm just crazy because I don't see many other reviews talking about these aspects of the story? Each reader takes away something different from a tale, and this is what I have chosen to take from this one.

Recommended for sure, but only for those who can handle such explicit horrors.

*Thank you to the narrator for the Audible download in exchange for my honest feedback. This is it!*

I very rarely leave bad reviews, but I have never read something so pathetically edgy and gross in my life. I don’t have a soft stomach, I consume a lot of horror, extreme horror, and true crime - it’s not that I cannot handle, this is just a bad book. I love the idea of a story about serial killers in love, and there are moments in this book that are interesting in that regard but they’re few and far between - the dynamic between Jay and Andrew was astonishingly bland, there was no chemistry and no real depth, it relied entirely on the gimmick of the serial killer thing which didn’t hold up. They’re both so over-the-top, it’s hard to feel anything at all for them. I didn’t need to sympathize with them, but I’m not even interested because they’re so predictable and boring in their evilness. The only decent portion was when Jay had some reservations about killing Tran, that was the only snippet of depth or real human emotion this book had. I could’ve also gone for this if it was meant to be campy and unrealistically perverse for a dark comedy element, that’d be great, but this is far too pretentious to read that way.

And then there’s that other guy, Josh? Jack? I cannot remember but the guy who is dying of AIDs. As a queer person, I was extremely uncomfortable with how this book seemed to be on a mission to include nearly every single horror the LGBT community has faced then describe it all in the most cold-hearted, vile, and dehumanizing way possible. The characters are not treated with any respect, not even the one and only named gay man that is not an abuser (which is inherently an issue that that’s the case), he is instead treated as a piece of meat and
perpetual victim and borderline fetishized for his race. I have no issue with queer authors writing about our struggles, but this book feels violating and disrespectful, I couldn’t shake that feeling in my gut the whole time I listened. Overall, this book could’ve been great with a few changes but it managed to fail on every possible level.

This book is not at all what I was expecting. I felt like the author used detail when it really wasn’t needed. Gross just for the shock factor. The story was “okay”
If less details were put into grotesque scenarios and sex scenes, and more details were put into the story, it wouldn’t have been half bad