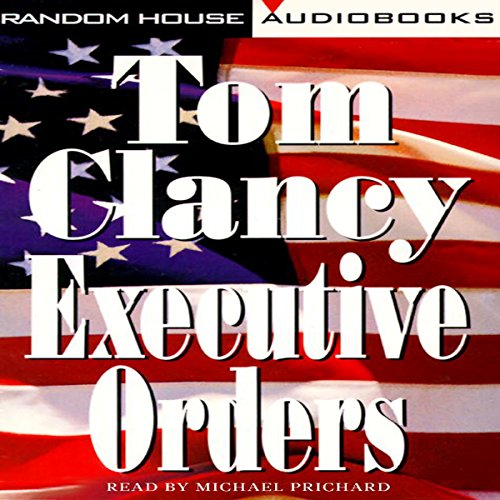 Debt of Honor ends as Jack Ryan is confirmed vice president minutes before a mammoth act of terrorism kills the President, most of his cabinet, all but a few members of Congress, the entire Supreme Court and all of the Joint Chiefs of Staff. Suddenly Ryan is President, which is where Executive Orders begins.

Ryan's responsibilities crush in on him. Where should he begin? He must calm a nation, pacify world leaders, arrange a massive funeral -- while he rebuilds a government as quickly as possible. But that's not all. Enemies abroad and at home see opportunities, and they'll soon present President Ryan with an unimaginable crisis. How will he tackle his greatest challenge ever?

“What sets this book apart is that for the first time, Clancy has gotten inside Jack Ryan's head, finally letting us see the real person behind the super-action hero.” (Boston Globe)

Don't some of us wish Jack ryan was real?

I would hesitate to name any single one of Tom Clancy's Jack Ryan books as my favorite, but if I did Executive Orders would probably be it. What an excellent book! When I started reading this series sometime in the late 80's it never dawned on me that Jack Ryan would ever become president. Still Clancy comes up with a plausible if unlikely sequence of events to propel Jack Ryan into the presidency of the United States. My only problem with the whole scenario is that I find it hard to believe that there are any politicians with as much common sense as Jack Ryan demonstrates in this book. Prichard does a good job as narrator of this book although there might be some better choices for narrator. Some people don't care for the detail that Clancy puts into his books or the length of this book in particular. I don't understand that myself. To my way of thinking I got this audio book for entertainment. Isn't 51 hours of entertainment better than 5 hours of entertainment? Would I recommend this book? I sure would!

A monster of a book but worth every cent, this Jack Ryan tale is woven into a great tapestry. The charicters are sublime and they all work. His knowledge on warfare, be it truth or fiction, is of the highest calibre. If you only get one Clancy, get this one but be warned, it is very hard to turn off. Ideal for when you have a week of painting the house or you are confined to quarters!

Too much of a good thing

Love Tom Clancy, but I really struggled to get through this monster of a book. This story undoubtedly lost many readers due to the gargantuan heaps of minutiae which is often repetitive. I got the impression at one time that Clancy was getting paid by the word. I didn't need to know the thread count of the linen napkins in the KLM first class passenger cabin. It was just way too much. At over 50 hours of audio (900 pages, half a million words the weight of a sack of sugar in hard cover), this book was simply too long. Most Clancy books I have read are less than half that long. The abridged version is five hours long. This tells us that the original is way too long and the story can be told in a much more compressed time frame.

After reading this book, I think I could work at the CDC because I learned more about Ebola and infectious diseases than probably half of the people that already work there.

The reader is simply horrible and does nothing to add any nuance to the various characters. They are all read with the same cadence and dialect. Some have a bit of a different accent, but the foreign accents on the whole are messy, inaccurate and annoying.

I can't remember if I paid full price for this book, but if I did I certainly have buyer's remorse.

Overall, the story is good and plot interesting. But the painfully excruciating details of non-essential and often unnecessary plot elements just bog this book down in a morass of self-flagellation.

As I started out writing this review, I gave the story four stars based on the outline of the plot. But the more I write, the more I realized how frustrating this book was to finish and downgraded to three... which may be overly generous. Perhaps Mr. Clancy viewed this book as his magnum opus and literary legacy when he pumped so much into it. If it was intended as such, it was a failure for an otherwise brilliant career.

You can skip whole chapters if you want and never lose the plot, because it will all be revisited in mind-numbing detail to set up the final crescendo which is not in as much detail as the rest of the book indicates. There is a excruciatingly long buildup for a comparative short payoff.

I have been listening to the complete "Ryanverse" from start to finish. The different readers have different styles but I haven't had an issue with either.

Admittedly its a shock switching from one to another after listening for 40-50 hours but after an hour or so it doesn't matter to me. If it was possible to pick one I would stick with one but so it goes. The Clancy books are a good read or a good listen and that upwards of 55 hours you do get your moneys worth.

No. I am generally impressed with audio books from Audible.com - the narrators are well chosen and well-directed, but not this one. Clancy's books have so much material that I usually like getting them as audiobooks as listening to the story makes me slow down and read the entire book.

He's barely better than a computer generated voice. He doesn't used much inflection, he doesn't do anything to help you cue into which character is speaking and his performance does not advance the story in this book.

A highly improbable scenario made plausible!

I think it is fair to say that Tom Clancy's tales would not be for everyone! For starters, there's the sheer volume of listening that's required! And then the stories themselves are woven together with many threads. This particular story seems so completely improbable that it is a tribute both to Tom's lively imagination and the Narrator, Michael Pritchard's delivery, that the end result is a story which seems completely plausible!
I'm sure others would disagree on that point but I found the descriptions of the various phases of the book quite believable. Tom's writing style has always appealed to me. His account of the battle phases carry comprehensive details of the weaponry used & it's effects. It could all be made up or it could be meticulously researched but the end result is beyond question!
If you drive a lot, like I do, or you simply have the time necessary for such a story, then I would recommend it!

In the wake of our current pandemic, this story hit home some, wrong president 🤷🏾‍♂️, anyway, I had a tear in my eye, hate in my heart, and an overwhelming joy, this is my 2nd go with this book, I encourage all who are thinking of purchasing this audio to do so, regardless of your political view, I believe you’ll love this long but totally involved story, ENJOY!

Several reviews suggested that Tom Clancy and his reader, Michael Prichard, had missed the mark with this edition of Jack Ryan. I am about half through with the book and find it exceptional and the narration is quite good.

Perhaps if you have not read any of the other books in this series, or not seen any of the pictures, you might get lost in the plot. However, anyone who is a fan of Tam Clancy and these charcters should find this an outstanding read. The complaint about the detail is understandable, but this is what Clancy has built his readership.
I was concerned with the negative reviews, but very happy I purchased this book, and find the unabridged version much to my satisfaction.

Wow....painfully slow over detailed. Wanted to put me to sleep. I usually like this particular narrator, but even he sounded bored and tired while reading. Slightly interesting educational stuff.

If you are a Clancy fan, the story matters

I have read most of Tom Clancy's work. I have enjoyed it all. Upon joining Audible I looked for the opportunity to hear his work and see if the stories were as alive as reading. Notwithstanding the mediocre narration in Executive Orders, the answer is yes. Sure I would have preferred a better performance but for me the story is the reason why we read or listen. If you are a new to Tom Clancy, I recommend you read or listen to Debt of Honor first. Doing so will really set the stage for Executive Orders and introduce you to Jack Ryan.

was not my favorite Tom Clancy but nevertheless sill entertaining and quite a good book. Funny or sadly enough some of the story reminded me of the current virus situation. Crazy how certain descriptions fit in the two world.
The performance of the reader was also quit good.

Tense to the end

What should I say... Again a masterpiece
The tension is building up until the end