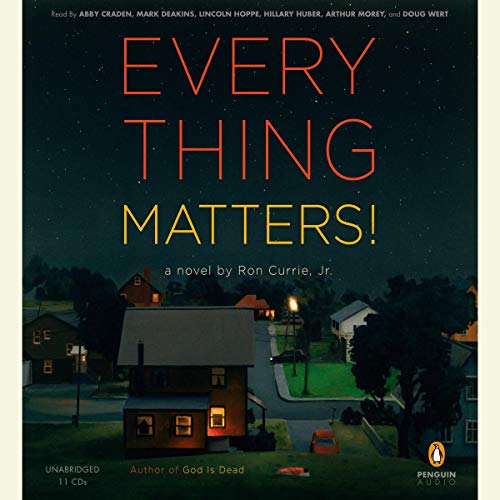 Everything Matters! tidily places Ron Currie, Jr. among the most talented and creative new American novelists. In his first novel since the story collection God Is Dead, Currie reveals a style not unlike Vonnegut  dry, but deadly funny, irreverent, and wholly meaningful. The storytelling is delicately but deliberately choppy, filled with impending dread and lingering hope. In utero, Junior Thibodeaux learns of a catastrophic, world-ending event some 30 years in his future. A voice explains the inevitability of the event, and Junior is born with the crippling knowledge of the impending doom he and everyone he'll grow to love will face. The voice is never explained  it could be a group of all-knowing beings (the voice refers to "we") or it could be the author himself, but it remains ever-present in Junior's life.

This mysterious voice reveals important and otherwise unknowable details about the world to Junior, and becomes an established character, however vague and unknowable. Spoken with authority by Mark Deakins, the voice can be likened to that of a gently persistent psychiatrist. It reveals almost no opinion about Junior's choices. In neutral tones, Deakins lends the voice a feeling of all-knowing and all-seeing non-participation  it does not step in to prevent or spark any decision by Junior. At the same time, the soft, steady narration includes subtleties of inflection that color the listener's perception. When Junior partakes in some dangerous activity, Deakins sounds almost imperceptibly disappointed and even a little concerned. This act of subtlety injects compassion and calm to what could have been a very cold, omnipresent voice.

Throughout the timeline of the novel, Currie pops in and out of the first person narratives of Junior, his parents, his girlfriend, and his brother, performed by several talented actors. These include Lincoln Hoppe (Junior), Hillary Huber (Junior's girlfriend Amy), Abby Craden (Junior's mother), Arthur Morey (Junior's father), and Doug Wert (Junior's brother Ron). Each narrator brings a unique voice perfectly matched to Currie's nonchalant, matter-of-fact tone. Hoppe deserves additional praise for exercising vocal restraint as the main character. Junior goes through a heck of a lot and is saddled with the emotional baggage of knowing the fate of the world, but Hoppe never lays it on thick in his narration. Instead he gives Junior a mentally exhausted, resigned tone that matches Currie's earlier description of Junior as a "serious child". Hoppe especially shines when the emotional weight of losing his girlfriend and his family start to wear Junior down. Josh Ravitz

In infancy, Junior Thibodeaux is encoded with a prophesy: A comet will obliterate life on Earth in 36 years. Alone in this knowledge, he comes of age in rural Maine grappling with the question: Does anything I do matter?

While the voice that has accompanied him since conception appraises his choices, Junior's loved ones emerge with parallel stories - his anxious mother; his brother, a cocaine addict turned pro-baseball phenomenon; his exalted father, whose own mortality summons Junior's best and worst instincts; and Amy, the love of Junior's life and a North Star to his journey through romance and heartbreak, drug-addled despair, and superheroic feats that could save humanity. While our recognizable world is transformed into a bizarre nation at endgame, where government agents conspire in subterranean bunkers, preparing citizens for emigration from a doomed planet, Junior's final triumph confounds all expectation, building to an astonishing and deeply moving resolution.

Ron Currie, Jr., gets to the heart of character, and the voices who narrate this uniquely American tour de force leave an indelible, exhilarating impression.

Don't Give Up On This One

I almost chucked Everything Matters at the start. It starts off with a freaky narrator discussing stuff that makes no sense...but stick with it. The author creates some memorable characters and throws into very strange situations. Very unpredictable with unique writing style that I eventually found enjoyable. Essentially a love story told in a quirky science-fictionesque style.

Everything Is A Plot Twist!

If, like me, you were drawn to "Everything Matters" by the description of the novel as a story of a man who knows when the world will end, you may be disappointed by the initial few hours of the book. The obtuse style of the novel takes a while to get used to, and, for me, never completely gels, but it eventually reveals a family drama with world destruction as distant backstory. The biggest problem I had with "Matters" is its relentless need to prove itself, piling on quirk after quirk, plot twist after plot twist until, frankly, I just didn't care anymore. That's not life, that's melodrama. Currie gains some redemption with a heartfelt third act, but it's too little, too late for this reader to recommend the book without reservations. The voice cast, for the most part, is excellent.

Worth coming back to after two years.

I enjoyed the book. Solid form of mild Sci-Fi with characters you could enjoy following along a path of doom. There wasn't much there that bent too far away from the mainstream idea of what is considered odd. No headlong dives into pools of the twisted but there was a few turn of events that brushed close to those things.
If you are looking for a solid story, which has a slow to medium pace build, and characters that you grow to enjoy, then this book should do you right.

Beautifully written. The characters are understandable, distinct, and grow over time. And just about the time I thought I had things figured out, something surprising would happen. I loved this book and did not want it to end. I downloaded this because it was the book chosen by all incoming Duke freshmen to read last year. This is, frankly, a book you would want your freshman child to read. It leaves you thinking about the importance of things long after the last sentence is done.

I happened to listen to this book whenever I needed a break (to cool off my smoking brain) from Michio Kaku's Parallel Worlds. Coincidence? You be the judge ;>) I found this book engrossing. At times I wondered if I was listening to the inside story of a schizophrenic's illness, at other times I wondered if the whole thing was just one big metaphor, and at still other times the impending end of the world faded to the background and I just witnessed the lives of the characters. For anyone who likes to ponder the imponderable, this book is wonderfully entertaining and thought-provoking. (I wish the title did not have the exclamation mark in it. It cheapens the weight of the story and the ideas. I don't know why that matters, except that everything does...)

This was one of those books that makes it hard to turn off the iPod and go to work. Interesting characters, surprising plot twists, superb narration. This goes in my top 10 and will merit a second listen in the future.

One thing I'll say about Everything Matters is that its plot messed with my expectations. Not that I had a lot of expectations about a novel that opened with disembodied voices telling a developing fetus that the world would end in 36 years, but Currie's story of a typical American life with a few very untypical things about it dodges easy categorization. It's neither magic realism, nor science fiction, nor a supernatural tale, but more of an earnest existential drama about the choices people make with their lives.

That said, I thought Everything Matters did a flawed job of living up to its own ambition. At times, it sucked me in with its soulful character studies, but other times, it felt like a string of self-indulgent, slightly unbelievable vignettes of the sort a gifted but amateur writer might bring to a workshop. Currie clearly wants readers to respond emotionally to his story, and pummels us with one piece of drama after another. On a page-by-page level, it's involving and sometimes sadly moving, but as a whole, the story seemed a bit unreal and the characters' motives somewhat arbitrary. As I progressed, I wondered if Currie had really known where he was going with his book, or was just fumbling around for plot ideas and trying to keep the reader's sense of incredulity from catching up. Now that I've finished it, I can't totally disown this impression.

But, I will say that Everything Matters at least tries for something different, even if it falls a little short in execution. Currie asks some serious questions and doesn't wrap everything up neatly -- in fact, the bleak but beautiful ending wasn't the one I would have seen coming at the beginning. You may find yourself, when all is said and done, pondering the choice the main character makes about three quarters of the way through the book, wondering what other paths he (or the author) might have taken. I'll give this book a thumbs up for that, even if it won't make any of my top ten lists.

Possibly the best audiobook I've listened to all year. For me, one measure of a great audiobook is that it leaves me glad that I chose to listen rather than read the printed book, and this one certainly meets that mark. The narration was perfect.

The book itself was incredibly moving without ever being sappy...if you like Vonnegut, you should really give this one a try.

I laughed, I cried, I was left in deep thought

I would feel ashamed if I ignore the profound message this has left me with. I enjoyed the humor, was shaken by the sad parts and am left ruminating on my thoughts since I finished the book. I may not have really cared for the story normally but I had to get through it and then decide. I'm still not sure

I don't usually send a review, but this book! It's so good I don't want anyone considering it to pass it by. Yes, it's really well written. Yes, the narration is excellent. It's the story, though, that is most outstanding. It's the way it grabs you, pulls you in, and takes your heart and your perspective on a unique and compelling ride.