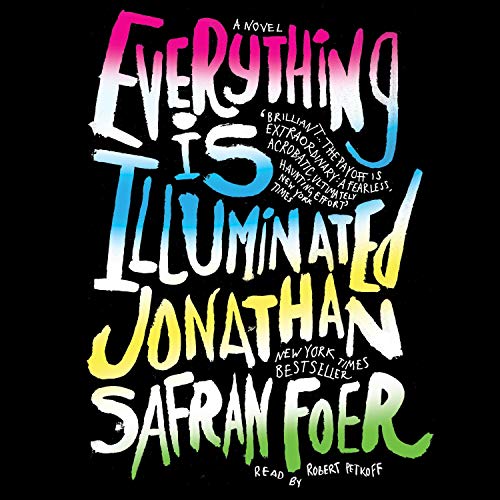 “Imagine a novel as verbally cunning as A Clockwork Orange, as harrowing as The Painted Bird, as exuberant and twee as Candide, and you have Everything Is Illuminated.... Read it, and you'll feel altered, chastened - seared in the fire of something new.” (Washington Post)

With only a yellowing photograph in hand, a young man - also named Jonathan Safran Foer - sets out to find the woman who might or might not have saved his grandfather from the Nazis. Accompanied by an old man haunted by memories of the war, an amorous dog named Sammy Davis, Junior, Junior, and the unforgettable Alex, a young Ukrainian translator who speaks in a sublimely butchered English, Jonathan is led on a quixotic journey over a devastated landscape and into an unexpected past.

As their adventure unfolds, Jonathan imagines the history of his grandfather’s village, conjuring a magical fable of startling symmetries that unite generations across time. As his search moves back in time, the fantastical history moves forward, until reality collides with fiction in a heart-stopping scene of extraordinary power.

“A rambunctious tour de force of inventive and intelligent storytelling...Foer can place his reader’s hand on the heart of human experience, the transcendent beauty of human connections. Read, you can feel the life be." (Philadelphia Inquirer)

Robert Petkoff has appeared on film and TV in Woody Allen’s Irrational Man,  Madm Secretary, Elementary, The Good Wife, Chappelle’s Show, and Law & Order. His Broadway credits include All the Way with Bryan Cranston, Anything Goes, Ragtime, Spamalot, and Fiddler on the Roof. Mr. Petkoff is an Audie and Earphones award winner.

It's odd that this book is more interesting because I watched the movie first. May be my opinion alone. But I love that the movie became the outcome of their letters. It's Alex's story, the movie has the image of him as who he wants to be seen as. His family is the better versions he begs Jonathan to write of. It made the book beautiful to me. Heartbreaking too. Some rant parts were a little much, but genius piecing together.

If ever you’re going to listen to a book, make it this one. The narrator’s performance illuminated this painfully beautiful story.

This is my story and the story of my family. But while the characters got caught in the loop, my grandfather broke free and the momentum of that split cast him across the world and into a most remarkable life and illuminated success that has rippled through his generations reverberating in me and my daughters. While still during the hours of the night that find little boys racing through dream worlds, young fathers wondering how they have befallen this fate, tired men wondering about that dark eyed Gypsy woman, and old men sobbing silently, I can feel the tug of the strings as the current of the Broad swirls and twists.

Only listened for ten minutes. Couldn’t stand to hear more. Why would anyone want to?