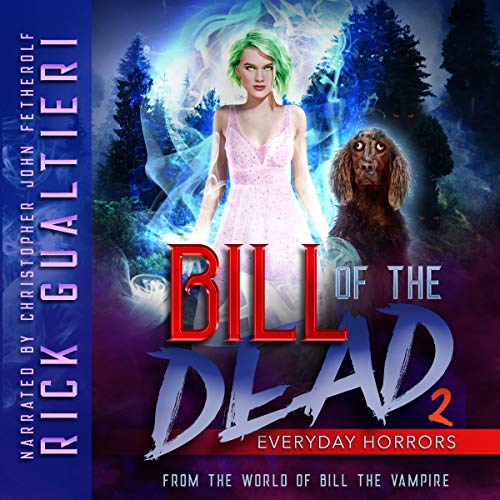 One geek against the rising darkness.

Bill Ryder is having a hell of a week. Magic is back, one of his friends has been entombed in solid rock, and he once again has no pulse to speak of. Too bad it’s about to get worse.

Something is hunting vampires in New York City. A smarmy wizard has been called in to investigate, one with skeletons in his closet and eyes for Bill’s girlfriend. All the while, neolithic horrors - not seen since the dawn of time - are reappearing, wreaking havoc wherever they step.

Bill will need to rally his friends, both new and old, if he’s to have any chance of turning the creeping tide of chaos threatening to drown his city. But it won’t be easy. The balance of power in the supernatural hierarchy has been upended, and all the attitude in the world might not be enough to fix it.

Bill the vampire is back in Everyday Horrors, the second book in the Bill of the Dead series that puts the comedy back into horror comedy. If you enjoy the snark of Shayne Silvers, Steve McHugh, Michael Anderle, or Jim Butcher, then you're in for one hell of a bloody fun ride.

a good continuation to bill the vampire. cuerious to see how the new characters develop as the story continues. also looking forward to seeing how the old characters advance in new roles. Rick Gualtieri did a great job

I got lucky enough to have just found this series a few weeks ago and it has been a great marathon with 10 great books and I hope 10 more to come. Love this series. It quickly became one of my all time favorites rivaling Harry Dresden, Super Powereds and The Sword of Truth series. Make sure you grab the box sets of books 1-4 and 5-8 to save some credits. If you’re just getting started in this series!! Lucky.

Funny with lots of potty humor

Love the story. Glenn grosses me out (I'm not good with being grossed out.. lol).

I'm looking forward to the next book! I'll find a way to deal with Glenn ;)

these books just keep getting better and better adding more to the mystery. i love glen, bark i mean meow. listen to the book then you'll get it.

Much as I love the entire Tomb of Bill series, this book has kinda let me down. There are tons of laughs as usual, but storywise, things seem to be placed out of the convenience of just being "weird". The story didn't seem to build so the end felt a bit stale. The characters tend to ramble, in thought or at each other, leaving me wondering if it's all to make the story longer than necessary. Towards the beginning, Bill is pretty mature. As the story progresses, other than being a handy hacker, he tends to be useless (although insanely funny as usual). The new character (no spoils) is cool but she's barely present. Can only guess we'll see more of her in the next story. Bill's subconscious is exciting and leaves you with questions. Though I enjoyed getting lost in another of Bill's supernatural adventures, this one just feels like a filler introducing a few new characters and random monsters to build a bit of foundation for book 3.

another great addition to the bill of the dead books!! i can't wait got the next one!! (fyi, Tom is still a jackarse. but Glen is the source of many belly laughs!)

Stay tuned for more fun from The Falcon Archives!

This was a fun listen/read, the humor was never tiring, the voice acting and characters memorable, one of the best audio books ive heard thus far, and highly recommend, especially the detail on Glen and rednecks. "%#&! em up boooysss" ya endless ROFL moments to be had. but then again ive been a fan of bill Rider and Ricks on point dirty sense of humor since day one. Most memorable moment was tom figuring out womanhood. R.I.P Kelvin Lightblade.

Another top notch story from Gualtieri and a beautifully sarcastic performance from Fetherolf! Top marks!

This Series Keeps Getting Better

I was truly saddened when Bill became human.
When this new series came out, it made me very happy.
This book was great, and I can't wait for the next book.