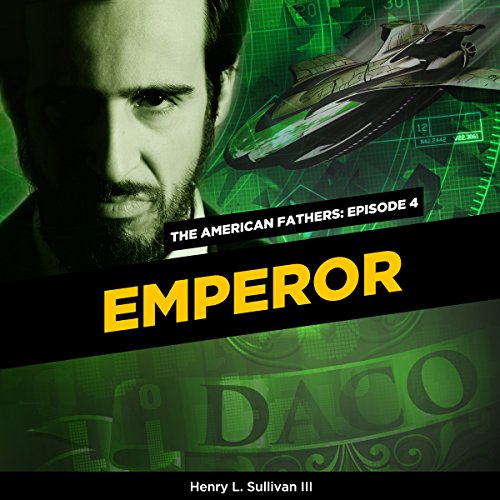 In 2012, no one saw Victor Daco coming. In 2024, he lobbied Congress to turn America's 13 most powerful conglomerates into sovereign regional states, transforming the control that corporations had held for decades over the US government into a formal nobility. Once the bill was signed into law, it became known as the New Rule. As the wealthiest man in the country, Victor became the most powerful patriarch.

Resistance to the New Rule grew steadily, so by 2032, Victor had created an army to confront it. He dubbed his anti-terrorist force The Fathers. To legally operate drones and transport troops within the United States, Victor began negotiating the terms of an aviation bill with the patriarchs of Second, Third, and Fourth House.

Will the other three patriarchs grant Victor the authority to execute American citizens with impunity and assume ultimate power? What about the other seven patriarchs? Can Victor handle resistance from another noble house while he attempts to make his crackdown on average citizens legal?

Emperor is the fourth episode of The American Fathers serial.

A good tale that ties the previous books together

Note: While this is Book 4 in the series, it works well as a stand alone, though it is definitely enhanced by enjoying the first 3 episodes previously. However, if you do pick this up as a stand alone, you might want to check out the glossary first to pick up some of the lingo, characters, and overall atmosphere of the series. For the audiobook, this glossary starts at the 2 hours 41 minutes mark and lasts just over 20 minutes.

Set in 2032, Victor Daco is at the height of his career, being America’s king in all but name and official letterhead. He’s been the power behind this New Rule movement for decades, setting up this rulership step by step. Now he just has to crush the POP Watchers, a hacktivist resistance group, and have the US President sign the final piece of legislation that will allow him total authority.

This is the book I had been waiting for in this series, the tale that ties all four stories together. The history of how the ruling Houses came into being is clearly laid out, past characters (such as Victor’s daughter Irene) are mentioned or brought into play, and the entire story arc moves forward a bit as Victor’s enemies circle him like waiting sharks.

My one quibble is that the female characters aren’t particularly important to the plot as they were in the first 2 books. Natalia, Irene’s mom, has the most lines. She is clever and elegant but nearly all of her role is to comfort Victor even as she builds up or reigns in his ego. I think she has more to give and I’m doubtful we will get to see that in future installments.

The science fiction bits were great. I love Victor’s chosen mode of transport, all the corporate spying that goes on, and cyber enhancements the rich can obtain. While I did like Victor’s fancy suit of armor, I felt the story was a little rushed in taking us from Victor the Ruthless Businessman to Victor the Iron Man. The story spends plenty of time on the political intrigue (which I like) but I would like to see this level of detail in Victor’s character arc as well.

Hispanic US President – yay! I quite love the multi-ethnic character list this series continues with. Take Victor’s college nemesis, an Arab royal, into account as well because Victor hasn’t made note of him, a failure he will regret. There’s a solid ending to this installment though I do wonder where the author will take the series from here. I expect Big Things to come about from the events of this book.

I received a free copy this book.

The Narration: The audio production and narration for this series continues to be excellent. The full cast provides a range of distinct voices for the characters. There’s also sound effects that enhance the story instead of distracting from it. I especially liked the use of this heavy metal music for this particular scene; it wasn’t loud enough to drown out the story but it was prevalent enough to make me believe the characters were having a hard time with the volume.