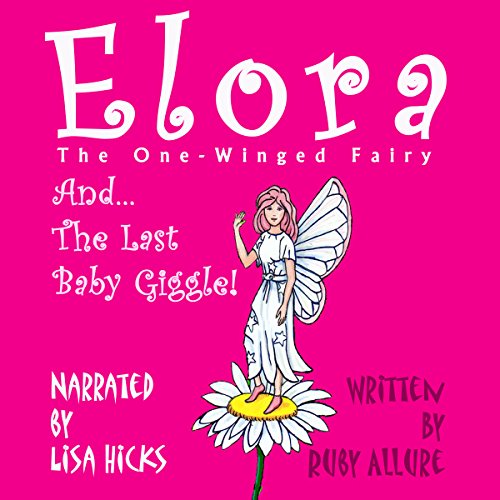 What would happen if all the laughter and giggles were stolen from the world? Mortlock, the darkest and nastiest fairy from the fairy realm, intends to steal all the baby giggles and laughter from the world so he can control humanity. He also plans to capture all the fairies so that he can use their magic to fuel his dastardly plan. What he didn't expect was Elora, the one-winged fairy, escaped his grasp and has been called to the world by a baby giggle. She has teamed up with Jasper, a rather cheeky fairy, to find a way to stop Mortlock. There is just one little problem: gravity. Gravity is affecting Elora's flight and having only one wing is proving a challenge. How can Elora overcome her erratic flying techniques to save the world and protect the last baby giggle?

What a really cute book!!

I liked Elora and the magic and world building and I think youth listeners will love it, too!

It’s written very well and it’s easy for youngsters to follow. It’s light and entertaining. I especially enjoyed how the villain is handled and whole hearted am relieved to find soft justice reintroduced!

Elora the one-winged fairy has had one of her wings stolen by Mortlock. She trys to adjust to flying with a missing wing. Mortlock had had his wings cut off by a teenage boy. He is very angry and seeks revenge on fairies and humankind. Can Elora and her friends save the faeries and humanity. The book interestingly demonstrates what role attitude plays when coping with a disability. A good fairy story which your children will love! I was gifted a copy of the audiobook in exchange for an honest review.

Look out tinkerbell Elora is awesome

This story would make an amazing animated movie by Disney or dreamwork. The characters are easy for kids and adults to relate to. The story is fast paced. The messages are clear and they are wonderfully delivered. The villain reminds me of the toy taker from the Rudolph Christmas shows of my own youth. Loved the story. Can't wait for more. Will be great listens for my grandkids with me. I was voluntarily provided this free review copy audiobook by the author, narrator, or publisher.