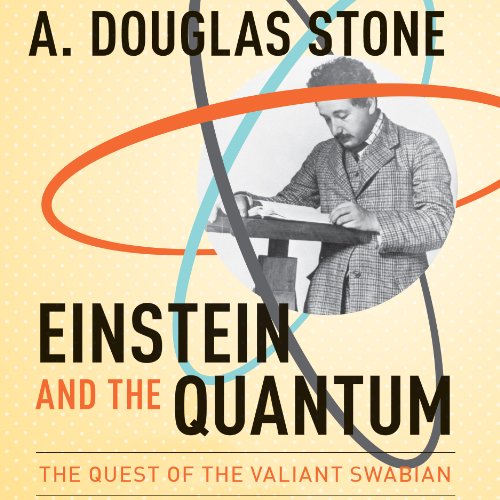 Einstein and the Quantum

Einstein and the Quantum reveals for the first time the full significance of Albert Einstein's contributions to quantum theory. Einstein famously rejected quantum mechanics, observing that God does not play dice. But, in fact, he thought more about the nature of atoms, molecules, and the emission and absorption of light - the core of what we now know as quantum theory - than he did about relativity.

A compelling blend of physics, biography, and the history of science, Einstein and the Quantum shares the untold story of how Einstein - not Max Planck or Niels Bohr - was the driving force behind early quantum theory. It paints a vivid portrait of the iconic physicist as he grappled with the apparently contradictory nature of the atomic world, in which its invisible constituents defy the categories of classical physics, behaving simultaneously as both particle and wave. And it demonstrates how Einstein's later work on the emission and absorption of light, and on atomic gases, led directly to Erwin Schrodinger's breakthrough to the modern form of quantum mechanics.

The book sheds light on why Einstein ultimately renounced his own brilliant work on quantum theory, due to his deep belief in science as something objective and eternal. A book unlike any other, Einstein and the Quantum offers a completely new perspective on the scientific achievements of the greatest intellect of the twentieth century, showing how Einstein's contributions to the development of quantum theory are more significant, perhaps, than even his legendary work on relativity.

Great book. Actually explains enough physics to get what Einstein did in areas such as thermodynamics, specific heat, light quantization, the derivation of the Plank law, ...etc. This was the companion book I was looking for to go along with Manjit Kumar's "Quantum" (another great book). The two should be read (or heard) one after another.

A must for aspiring physicists/physics enthusiasts

This book was recommended to me by prolific physicist Alain Aspect at a talk he did at my University. He said that if I didn't end up liking the book, that he would pay me back for it. He makes this offer to lots of physicists and physics students, because he knows that they won't be disappointed. Now, on to the book itself.

Most physics lovers are familiar with Einstein's early contributions to what would ultimately blossom into modern quantum theory, such as his Nobel prize-winning work on the photoelectric effect. however, due in large part to his Monumental achievements with relativity Theory, and his philosophical objections to the emerging quantum theory, many are never made aware of the true extent of his involvement with (as well as his influence upon) the emerging theory of quantum mechanics. This book tells that story.

One of my personal favorite aspects of the book was the section in which the author gives what is perhaps the clearest and easiest-to-understand description of Bose-Einstein statistics I've ever heard. *That's essentially the application of Boltzmann's statistical mechanics/thermodynamics to quantum ideal gases, and would ultimately turn out to describe the aggregate behavior of the category of particles now known as bosons: particles with integer intrinsic spin angular momentum quantum numbers (i.e. photons, mesons, W & Z bosons etc), in contrast to fermions (spin 1/2 particles, such as quarks, leptons and baryons).

Anyway, I enjoyed the book.

I thought I'd read every important on the origins of quantum mechanics, but Doug Stone's book opened my eyes to Einstein's centrality in the development. It is great having a book like this written by an eminent physicist such as Prof. Stone. The book doesn't shy away from describing the basic physics, and it comes across very well even without pictures. I love the description of Bose-Einstein condensation in terms of throwing two identical vs. distinguishable dice. The narration was generally great, but the narrator pronounced some of the names (such as de Broglie) differently than what I'm used to.

Deep insights into the life of one of our greatest minds to date. Very detailed and well-written, it holds the reader’s interest. Highly recommended.

I just listened to this again after cycling through as many other physics Audibles as are available, and I can say without hesitation that this one is the best in terms of modern physics concepts that all undergrad physics students learn. Nothing too complicated, but plenty of useful conceptual discussions.

This is a great book everybody should read or listen. Can be a eye opener to how the universe around us is in reality!!!

Great book for physicist or amateur.

Gives the history and easy to understand yet in-depth scientific explanations. Told in an entertaining way. Great read!

A well done exposition on Einstein's role in quantum mechanics. Does a good job of balancing the mathematical, theoretical, and the history. A detailed account is given of the early switch from classical mechanics to quantum mechanics, unique to this audiobook; the last fourth is for established post 1925 quantum mechanics.