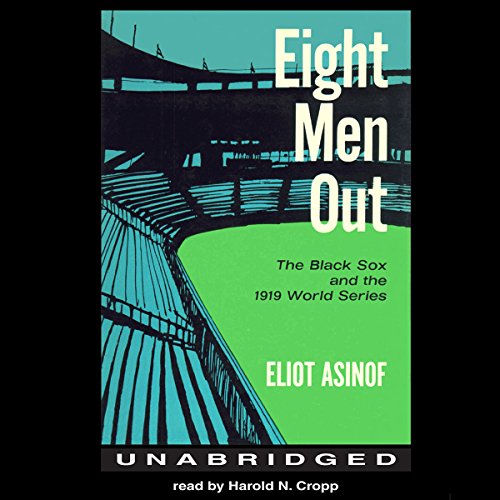 In 1919, American headlines proclaimed the fix and cover-up of the World Series as "the most gigantic sporting swindle in the history of America." In this painstaking review, Eliot Asinof has reconstructed the entire scene-by-scene story of the scandal, in which eight Chicago White Sox players arranged with the nation’s leading gamblers to throw the series to Cincinnati. Asinof vividly describes the tense meetings, the hitches in the conniving, the actual plays in which the Series was thrown, the Grand Jury indictment, and the famous 1921 trial. Moving behind the scenes, he perceptively examines the backgrounds and motives of the players and the conditions that made the improbable fix all too possible. Far more than a superbly told baseball story, this compelling American drama will appeal to all those interested in American popular culture.

Good read. Told from the eyes of that time.

Told from the 1919 perspective and not a look back. Enjoyed it very much and would recommend to anyone who loves history, sports, or both.

What did you love best about Eight Men Out?

The period of time the story takes place. The people that cause the tragedy to happen to them selves except maybe buck weaver and the dark Sydenham of how games could be fixed.

What other book might you compare Eight Men Out to and why?

I saw the movie and it was good but the book gives you much better insight.no book I have read compares with thi one.

There were many but when shoeless joe is found to have given his depositin and took the money well that was the most painful scene.

A true work of genius

What did you love best about Eight Men Out?

The aura of the story.....the evil owner and his allstar team pf miscreants. Excellent work.

The narrative and narration were top shelf

What about Harold N. Cropp’s performance did you like?

His soft delivery and professional narration. Nothing forced or ginned up. Just perfect.

I'm not a baseball fan, bit I loved the intrigue. Wonderful.

As a fan of not only baseball, but the history of the game, I was hoping to enjoy this audiobook much more than I did. And though Asinof’s account was detailed and at times compelling, it dragged on, as did Cropp’s narration. I rarely - if ever - say this, but I’d see the movie instead.

This is a tremendous book. Filled with twists and turns. Where are players are tainted by just wanting to be paid what they are worth. It is a good read/listen. The narrator does a fantastic job, too, although he did mispronounce a couple players names (e.g., Rube Waddell).
The thing I find amazing is that I’ve been watching baseball for a long, long time. I think I know a little about baseball. However, when I listen to the description of how Eddie Cicotte pitches, I realize that I know nothing of the game. The intricacies. A player’s mindset.
Even though this is about a sad episode in baseball history, it is a fantastic read, and makes me appreciate and love the sport.

Knocked it out of the park

This is a really interesting story, it's got a lot of baseball history which even I found interesting not being a huge fan of the sport. The narration is a bit dry at times, I found myself zoning out, but I don't think I missed anything - in that way I guess it is sort of like the game itself.

I recommend this for baseball fans obviously but also for history fans.

Plenty of corruption to go around

Nice to know the details of the scandal, most not given in the movie. Plenty of corruption on both sides to go around.

Review of 8 Men Out.

Learned so much about what really happened in the Black Sox scandal. So much that I didn't know. The book was very informative and entertaining. I highly recommend this book
to any die hard baseball fan.

This is well-worth the reading by baseball historians everywhere, and, like the sad Pete Rose tale, a lifelong cautionary tale against MLB players gambling on the game. Indeed, there should be NO betting on Baseball, period. Sadly, MLB is as full as hypocrites today as they were in 1919!

What an absolutely abhorrent flight for those young athletes. Taken advantage of for the lack of education and their naïveté. They never had a chance. What is sick and avaricious old man Comiskey was. Absolutely no honor.