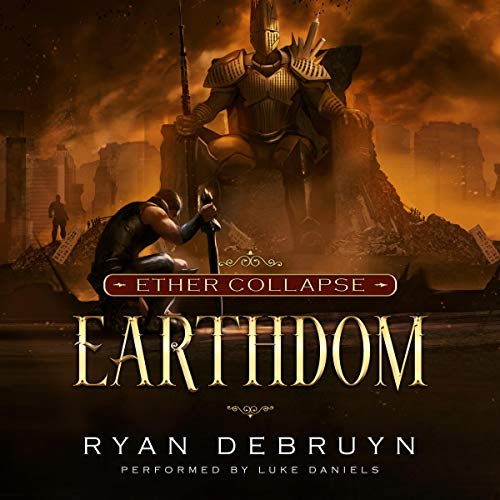 Territorial growth. Ancient conspiracies. The apocalypse is getting worse.

Rockland Barkclay was saved and pulled into an alternate realm moments before his death. He thought that sacrificing himself would save the Grotto and give them a chance to prosper. He wasn’t expecting to open his eyes, reborn on the altar.

Gaia has ordered the Golems to protect humanity, but their "protection" against the environment is sending humanity to the brink of starvation. Rocky needs to find his family, and his only option is to search through survivors one by one. Every person saved increases the population of the Grotto, but is also another mouth to feed.

After saving thousands and not finding a single familiar face, new intelligence reaches the Grotto: sending Rocky against a challenge that even the King of Apes couldn’t overcome.

MC turns into an idiot

The previous books were better, Rocky has never been a genius but all the sudden he’s an emotionally compromised idiot making stupid decision after stupid decision.

After completing this audiobook I am disappointed. No character growth, no development in the story. The main characters level in ability was stagnated. This audiobook was 11 hours long and only one major story development happened. Everything that took place in book 3 could have be summarize 4 hours tops, with the rest of the time dedicated to expanding the universe. In the series you can pretty much skipped book 3, because you’re just going to hear everything that took place in a prologue in book 4.

Rocky is emotional and foolish. I hope he gets better and takes charge in the upcoming books.

I gave this series a chance on a whim and have thoroughly enjoyed it since. This book adds additional depth to the lore, quests, and world events, leading to a better overall view of this world and its challenges. What stopped me from giving it 5 stars was that there were multiple times when the MC had a chance for series emotional development between other characters and himself, but it was either dismissed or passed over

Really enjoyed past books and would have loved this one, But Rocky was so aggressively stupid, insecure, and constantly angry that it ruined him for me (at least for this entry). Mostly it felt out of character give previous books' characterization

Not as enjoyable as previous books

Rocky's anger, lack of logical thinking, and crybaby attitude in this book took alot of the enjoyment away from the story. I enjoy this series but i dont see myself relistening to this individual book any time soon. Hopefully the next book is better.

My only problem with these books is that it they aren’t 20 hours long. I genuinely love this story and the universe around it, I can’t wait for more but I will begrudgingly do so... if I must. Ryan DeBruyn has crafted another amazing edition to the series and I can’t sing his praises enough, except when I finish this review then I guess I’ve declared that enough. Ok that’s enough... till the next book... still reading this review? Go get the book you’ve already read the others presumably so do it already... all the cool kids are reading it in bathrooms and graveyards or wherever they hang out.. prolly home though with all this pandemic and all.

I've seen this in several other books an MC has problems with his anger and while the growth of a character is important edgelording in book 3 is just pathetic. The constant overly emotional reactions of Rocky have made me hate the character and I can't help but think, is this a soapopera or a LITRPG? My biggest frustration is rocky making same mistakes and crying about it over and over. He never learns or grows just more of the same and it takes away from a possibly good story. Rocky makes a promise to himself at the start of the book to be better and it ended with him breaking that promise.

Not a lot to say about the book. it continues on the adventure and the attempt to save as many humans as possible and prepare for what is to come. Dungeon delving, a small invasion, a new class, and finally some movement on the relationship! of course Luke Daniels does a stellar job as always as well. if you liked the first ones, you'll like this one!

I thought this was a great addition to the series and am looking forward to the next book.