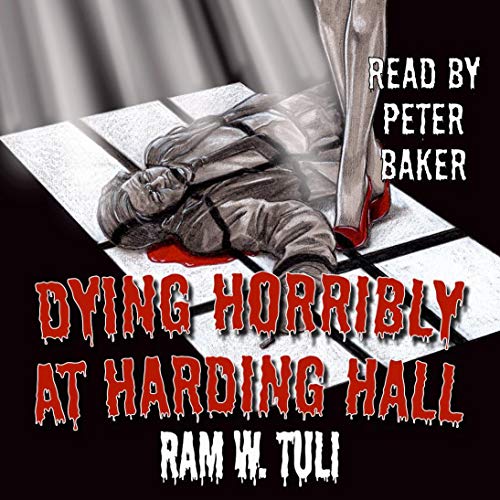 In Dying Horribly at Harding Hall, Book 1 of the Harding Hall Mystery Series, we meet a wealthy, aristocratic English family — generation after generation — of lecherous and greedy muttonheads. The story focuses on 11 mysterious deaths, with several extras along the way. There’s dry and sly humor from the start, but it’s only as the tapestry unfolds that we realize the truth — and the truth is becoming more and more crazed. As the farce builds, the deaths — and the motives — become outrageous, and often hilarious. But they never quite become incredible. That’s because these tales of stupidity, greed, lechery, and brutality, though they may stretch our credulity on occasion, remain sadly in line with human nature.

Going back to the 1920s, the heirs of Harding Hall have been dying bizarre and apparently accidental deaths. Our heroes, or more accurately antiheroes, brothers Lars and Loris Harding, have decided to call in a supposedly brilliant detective from India named Depak Chota. It’s not that they are that deeply concerned about the deaths of their mostly despicable relatives. Rather, their interest has become a bit more urgent now that they are next in line to inherit Harding Hall.

I really savored this story. It is humorous and quirky. The narrator does a great job with reading all the different characters. It starts with landed titled family whose line of succession is marred with a series of bizarre deaths. Every Lord is killed in an unlikely accident. A beam falls on one, a horse throws another, electrocution by lightning, car accident and the list goes on. Answers to Why, how and who are investigated the private detective from India and the Brothers next in line.