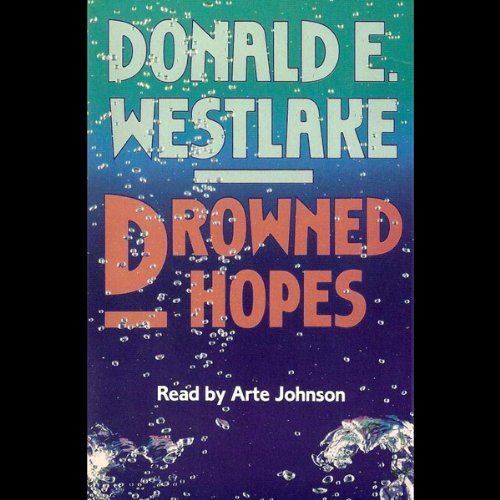 Arriving home at dawn after another failed burglary, John Dortmunder - the anti-hero of Donald Westlake's popular comic crime series - is shocked to find his apartment occupied by a notorious cellmate everyone had supposed (and hoped) had been jailed for life. Tom Jimson needs Dortmunder's help.

Thirty years ago, before his last prison stretch, Tom had pulled a big job up near Albany - a very big job - that left a cool $700,000 in cash buried under a water reservoir in an upstate New York valley. Being the nasty sort of fellow he is, Tom's plan is to blow up the dam, flood the surrounding countryside, and grab the cash. With the fate of 900 small town nobodies hanging in the balance, Dortmunder races against Tom's itchy dynamite finger to formulate an alternative plan for retrieving the loot. Thus begins a convoluted caper, in the Westlake tradition, of misadventure and hilarity.

What could have made this a 4 or 5-star listening experience for you?
A different reader, along with a guarantee that Johnson would never record another book.

How did the narrator detract from the book?
He made it impossible to listen to: Arte Johnson is so far beyond awful I don't even know words to convey the depths of his hideousness. Grating voice, few (and random) changes of tone for character and scene, volume ranges from 2-10 without warning, pacing speeds & drags like an old tape machine with stretched tape & stripped gears...I could go on endlessly. I realize the production is probably old but still, it sounds as if it was recorded inside a 55 gallon steel drum.

You didn’t love this book... but did it have any redeeming qualities?
Everything but the reader.

Any additional comments?
I've been a Westlake fan for decades & wouldn't have thought it possible that I'd be completely unable to listen to a Dortmunder book. What were they thinking when they produced this travesty?! I have visions of Johnson holding them at gunpoint, or with pictures of the producers in compromising situations with livestock.
To paraphrase Monty Python, this is not a book for listening. This is a book for avoiding.

Would you try another book from Donald E. Westlake and/or Arte Johnson?

I really liked the book but this reading was so bad that I can't even listen to it. It was too hard to understand the mumbling delivery.

I wouldn't buy another audio book read by Arte Johnson

This is a typical misadventure with Dortmunder and co. that introduces a couple new (but not particularly interesting or believable) characters. The story is marred by some convenient coincidences and a sudden and unsatisfying ending. It also seems a shorter adventure than the others so far. A bigger issue is the sound. The volume jumps from a murmur to a shout and back, requiring adjustment by the listener. The biggest issue was the narrator, Arte Johnson, who rushes through the text. His breakneck pace robs the dialog of cadence and inflection, making the speakers hard to distinguish. Arte attempts some accents but they drift from scene to scene. Whether it is the pace or lack of inflection, Dortmunder's weary fatalism and Kelp's optimism weren't as apparent. I'd previously read this book and was more satisfied with the story so I have to believe the biggest issue with the Audible version is with the narrator.

Narration was terrible. Can’t get rid of the stars but worst narration ever.
Couldn’t understand

Classic Westlake, great plot, but sound alternates between inaudible whispers and blaring. Had to constantly adjust volume to follow.

I read this book a few years ago and loved it. Arte Johnson did an excellent job with the reading. He did a very well changing voices during the rapid fire conversations as well as adding occasional sound effects. Only complaint is that it was too short!

Where does Drowned Hopes rank among all the audiobooks you’ve listened to so far?

In all my years of listening to books on recorded media, this will always be among my very favorites. I bought it on CASETTE tape and I have revisited it many times since.

The plot is great -
An old ( and elderly ) cell mate of Dortmunders has finally been released on parole and wants help recovering money which he buried behind a library in a small town 'upstate'. The trouble is that now, there is a manmade resevoir where the town used to be. "Now my money is buried under 6 ft of dirt, and 40 ft of water." All of the different wacky plans that the gang comes up with for salvaging the money and the fact that the old convict continues to be a homicidal maniac who constantly needs to be stopped from just blowing up the damn to let the water drain out, make this just a hilarious story that still makes me laugh everytime I listen to it. And it is Arte Johnson that makes it come to life.

Arte Johnson is spot-on with the characters voices. Dortmunder, the downtrodden thief. Kelp, the optimistic sidekick and all manner of other colorful and quirky characters which he verbally illustrates beautifully.

A wonderful piece of fun escapism. I still listen to it once every few years. In fact I drove my kids crazy for a bit because I was always quoting lines from it.

ABRIDGED is putting it mildly

ABRIDGED is putting it mildly! Hacked down to 2 hours! Wish I could get a refund!

Abridged leaving most of the book out

Drowned Hopes is a great book and if you ever get a chsnce to read or listen to the unabridged book, it’s well worth it. I would not have bought this if I had realized that so much of it and so many good scenes had been cut out. I found it more difficult to follow as a result; less understanding of the characters and action piled on action. I wish Audible had an unabridged version.

Volume was erratic but otherwise well done!
Story is great as always. More humor in this than others.