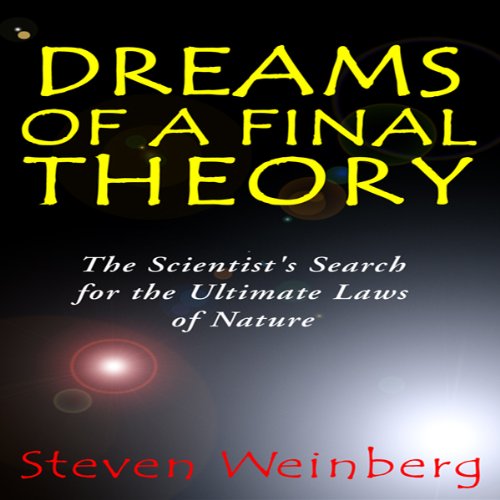 Dreams of a Final Theory

This is the story of a grand scientific quest: the quest for a unifying theory of nature. Writing with dazzling elegance and clarity, Nobel Prize - winning physicist Steven Weinberg retraces the steps that have led modern scientists from relativity theory and quantum mechanics to the notion of superstrings and the idea that our universe may coexist with others. Along the way, he voices the questions that are always present: Why does each explanation of the way nature works point to other, deeper explanations? Why are the best theories not only logical but beautiful? And what implications will a final theory have for our philosophy and religious faith?

Intellectually daring, rich in anecdote and aphorism, Dreams of a Final Theory launches us into a new cosmos and helps us make sense of what we find there.

"A splendid introduction to the nature and ambitions of modern physics and a brilliant and...moving essay on its philosophical implications." ( San Francisco Chronicle)
"Listening to this audiobook, one feels as if one has entered the classroom of a popular physics professor. With a clear tenor voice, [Langton] never falters in this reading, even when tackling the many difficult physics terms." ( AudioFile)
"This splendid book is as good reading about physics and physicists as this reviewer can name...clear, honest, and brilliantly instructive." ( Scientific American)

I decided to approach Steven Weinberg's "Dreams of a Final Theory" because it is an area about which I know little. The Audible offering of the book is very good. I seek out books that are well read, well written and informative. This audio volume wins on all three counts.

I came to the book as less than a novice. I caught onto the authors points without a deep understanding of math, E=MC2 or anything of the kind. His chapter, "On a Piece of Chalk," introduced basic principles of Atomic Theory in a clear way. His placement of physics into historical context was particularly helpful.

If you are a novice and would like to learn something new - this may well be worth your time. It was worth the time so far as I was concerned.

If you don't know who he is, look him up

Would you listen to Dreams of a Final Theory again? Why?

yes. it's a great book. It is a tad brief but still enjoyable

At times it was a little over my head but that is why we read books that challenge us. The last three chapters were pure delight.

An authors self ingratiating exercise masquerading as a fancy textbook.

There was some worthwhile information but could only make halfway through before his opinions on everything became too much to deal with. Even his voice is arrogant despite little original thought.

Jumps around a bit and assumes some knowledge.

I like to listen to books about the history of science and some of the concepts of physics. This book brings up a lot of concepts without explanation. For example, when he mentions the Standard Model, he assumes the reader knows what that his. Presentation is OK, comes across somewhat haughty. This is not the place to learn about physics. Stick to the Great Courses for that.

The book is slightly aged but still a fascinating story of Science. Great reader - great listening

Is there anything this author cannot do?

Not only is the author by all accounts a giant in modern physics but it turns out he's a graceful and passionate writer. Not fair that one person can do all of that!

He sets himself the task of making non-scientists like me care about the most obscure aspects of elementary particle physics. You don't know what elementary particie physics is? Neither did I! And I would say that 20% or more of what Weinberg writes in this book went right over my head. But it didn't subtract from my joy in the book, which at its core is a celebration of human curiosity and diligence in cracking the code to the most fundamental laws of nature. You emerge staggered by what human beings, when they collaborate, are capable of.

The book is an act of intellectual generosity -- a researcher taking time away from his research to explain his field to those who don't understand it. Steven Weinberg died this year -- let's tip our hat to an extraordinary man.

Science doesn't stop. Quickly upon starting to listen one is tripped up by statements evidencing that things have moved on and what is being heard acquires the shade of unreliability and being behind the curve.

was a great explanation of the basics and history of particle physics. Written at a level that was challenging to a novice. But still very accessible.